Paraselenic Chapter 1: Paraselenic, a harry potter fanfic. ▫ộ»I solemnly swear I am up to no good «ộ▫ Disclaimer: Let's see…my niece's name starts with a J, mine with a K, and my daughter's an R. 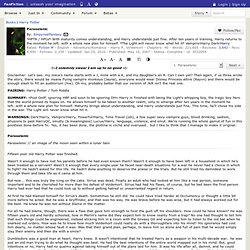 Can I own yet? Then again, if us three wrote the story, there would be insane flying vampire monkeys (Jayna), everyone would wear Disney Princess attire (Rayvn) and there would be enough slash to fill an auditorium (me). Oh my, probably better that our version of JKR isn't the real one. PAIRING: Harry Potter / Tom Riddle SUMMARY: «Post OotP, ignoring HBP and soon to be ignoring DH» Harry is finished with being the Light's whipping boy, the tragic boy hero that the world pinned its hopes on. WARNINGS: Dark! Paraselenic Paraselenic // an image of the moon seen within a lunar halo Fifteen year old Harry Potter was finished.

Wasn't it enough to have lost his parents before he had even known them? But now... this was truly the icing on the cake. At first he had blamed himself for Sirius's death. Team Darklord - Update Number 50! At long last, we've made it to fifty updates! 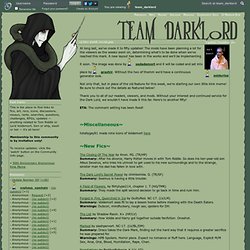 The mods have been planning a lot for the viewers as the weeks went on, determining what's to be done when we've reached this mark. A new layout has been in the works and we'll be implementing it soon. The image was done by sadademort and it will be coded and set into place by. Etidorpha. Sort: Category . 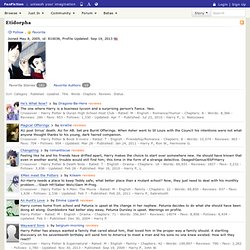 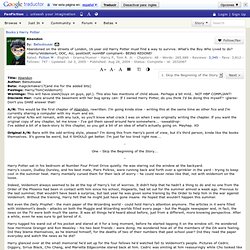 This also has mentions of child abuse. Perhaps a bit mild… NOT HBP COMPLIANT! Disclaim Her: -runs around the basement with her bug spray can- If I owned Harry Potter, do you think I'd be doing this myself? -glares- Don't you DARE answer that! A/N: This would be the first chapter of Abandon, rewritten. Original A/N: Bare with the odd writing style, please? One - Skip the Beginning of the Story... Harry Potter sat in his bedroom at Number Four Privet Drive quietly. Indeed, Voldemort always seemed to be at the top of Harry's list of worries. Not even the Daily Prophet - the main paper of the Wizarding world - could hold Harry's attention anymore. Harry tugged his wand out of his pocket and stared at it for a long moment, before he started tapping it on the window sill. 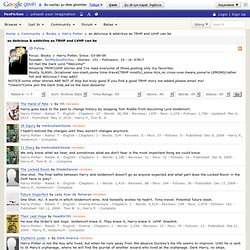 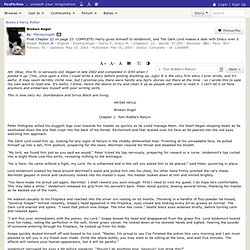 (Yes, once upon a time I could write a story before posting anything up…sigh) It is the very first story I ever wrote, and it's awful. It may seem terribly cliché now, but I promise you there were hardly any hp/lv stories out there at the time - so I wrote this to sate my own want to read one. It's awful, I know, hence the desire to try and clean it up as people still seem to read it. I can't let it sit here anymore and embarrass myself with poor writing skills. This is now very AU. Broken Angel Chapter 1: Tom Riddle's Return Peter Pettigrew willed his sluggish legs over towards his master as quickly as he could manage them. The Dark Lord sized him up, looking for any signs of failure in the chubby dishevelled man. "My lord, we found him just as you said we would. " Choosing Loyalties Chapter 1: Author Notes, Warnings, and Disclaimer, a harry potter fanfic. Title: Choosing Loyalties. 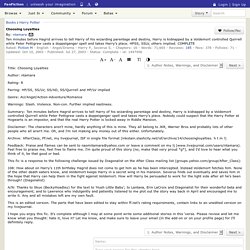 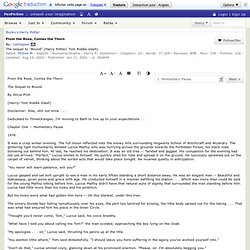 Dedicated to ThreeOranges: I'm moving to Bath to live up to your expectations . . . Chapter One -- Momentary Pause It was a crisp winter evening. "You never will learn patience, will you? " Lucius gasped and sat bolt upright to see a man in his early fifties standing a short distance away. But his looks were what had gotten him here -- On this blanket, under this tree. The silvery blonde hair falling tumultuously over his eyes, the pert lips tailored for kissing, the lithe body spread out for the taking . . . Voldemort raises Harry,Harry is Voldemort's Son. Noir Et Blanc Chapter 1: Breaking the Mold, a harry potter fanfic. There is no black or white, or even shades of gray. 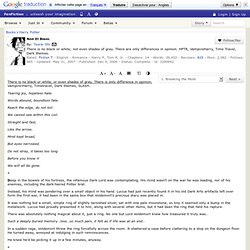 There is only difference in opinion. Vampire! Harry, Timetravel, Dark themes, SLASH. Tearing joy, hopeless hate. Words abound, boundless fate. Reach the edge, do not toil. We cannot see within this coil. Straight and fast, Like the arrow. Mind kept broad, But eyes narrowed. Do not stray, it takes too long Before you know it We will all be gone. Deep in the bowels of his fortress, the infamous Dark Lord was contemplating. Instead, his mind was pondering over a small object in his hand. It was nothing but a small, simple ring of slightly tarnished silver, set with one pale moonstone, so tiny it seemed only a bump in the metalwork. There was absolutely nothing magical about it, just a ring. Such a deeply buried memory…loss…so much pain, it felt as if life was at an end… In a sudden rage, Voldemort threw the ring forcefully across the room.

GASP! It's Harry and Voldemort together!