Influence of Souls. No More Than a Means. Harry Potter and the New Neighbour. Part One: "Moving Day" If there was one thing that Vernon Dursley of number four Privet drive disliked more than his good for nothing, scrawny, freak of a nephew, it was noise. 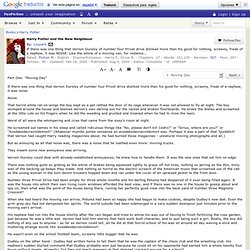 Noise. That horrid white rat-on-wings the boy kept as a pet rattled the door of its cage whenever it was not allowed to fly at night. The boy stomped around the house and blamed Vernon's own darling son for the racket and broken floorboards. He broke the dishes and screamed at the little cuts on his fingers when he did the weeding and grunted and moaned when he had to mow the lawn. Worst of all were the whimpering and cries that came from the sissy's room at night. He screamed out names in his sleep and called ridiculous things like "No, please don't kill Cedric! " But as annoying as all that noise was, there was a noise that he loathed even more: moving trucks. They meant some new annoyance was arriving. Vernon Dursley could deal with already-established annoyances; he knew how to handle them.

Was she moving in alone? A Green Flamed Torch. The Green Flame Torch by Richan Summary: Something's afoot in the Ministry, and things are about to get even stranger than normal for Harry and his friends as they return for their sixth year at Hogwarts. 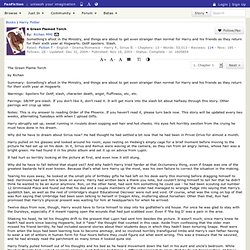 Time Tied. Time Tied By- Eruva Hi loves, Here's something to start you off so you know what you're reading. 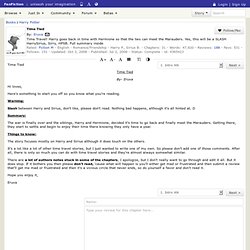 Warning: Slash between Harry and Sirius, don't like, please don't read. Summary: The war is finally over and the siblings, Harry and Hermione, decided it's time to go back and finally meet the Marauders. Things to know: The story focuses mostly on Harry and Sirius although it does touch on the others. It's a lot like a lot of other time travel stories, but I just wanted to write one of my own.

There are a lot of authors notes stuck in some of the chapters, I apologize, but I don't really want to go through and edit it all. Crepererum. Disclaimer: The Harry Potter universe and all its characters, creatures, places and incantations belong to J.K. 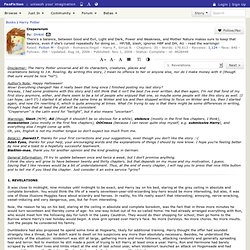 Rowling. By writing this story, I mean no offence to her or anyone else, nor do I make money with it (though that sure would be nice *lol*). Author's Note: Happy Halloween! Wow! Everything changed! Warnings: Slash (M/M), AU (though it shouldn't be so obvious for a while), violence (mostly in the first few chapters, I think), molestation (also mostly in the first few chapters), OOCness (because I can never quite stop myself, e.g. submissive Harry), and everything else I might come up with.Oh, yes, English is not my mother tongue so don't expect too much from me. Beta(s): jharad17, thanks for your first corrections and your suggestions, even though you don't like the story :-(Adah Eyes, thanks for your help, your encouraging words and the explanations of things I should by now know. Dumbledore had also proposed he spend some time at Hogwarts, likely for additional training. Kal. Summary: Ten years ago Lily and James Potter's only son harry went missing, Five years ago Lucius and Severus Malfoy Snape adopted a ten year old boy with bright green eyes. 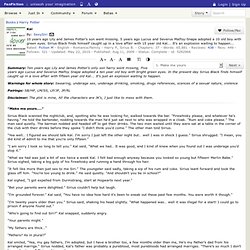 In the present day Sirius Black finds himself caught up in a love affair with fifteen year old Kal... It's just an exploson waiting to happen. Warnings for whole story: Swearing, underage sex, underage drinking, smoking, drugs references, scences of a sexual nature, violence Pairings: SB/HP, LM/SS, LP/JP, JP/RL Disclaimer: The plot is mine, All the characters are JK's, I just like to mess with them. "Make me yours.... " Sirius Black scanned the nightclub, and, spotting who he was looking for, walked towards the bar. "Yea well… I figured we should talk Kal. "I am sorry I took so long to tell you. " Guided By A Star. Title: Guided By A StarGenre: Drama/FamilyWarnings: SLASH, mpreg, non-graphic violence & torture, mild swearingCharacters: Harry Potter, Sirius Black, OC's, Severus Snape, Remus Lupin, Lucius Malfoy, Narcissa, Draco, Andromeda, Tonks, Weasleys, Hermione, Dumbledore, Bellatrix, assorted DE… LOTS! 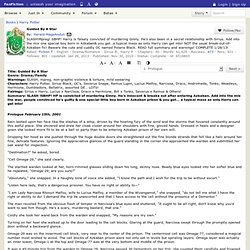 Pairings: Sirius x Harry, Lucius x Narcissa, Draco x Hermione, Bill x Tonks, Severus x Remus & Others! Summary: SLASH ! SBHP! HP is convicted of murdering Ginny. He's innocent & breaks out after entering Azkaban. Prologue February 15th, 2001 Rain lashed upon her face like the slashes of a whip, driven by the howling fury of the wind and the storms that hovered constantly around this awful place. Dropping her hood as she pushed through the huge double doors she straightened out the fine blonde strands that fell like a halo around her fine, delicate features. "Destination? " "Cell Omega-29," she said clearly. The startled warden looked at her, horn-rimmed glasses sliding down his long, skinny nose.