Editorial Guide: To Hyphenate or Not to Hyphenate? - Marywood University. The easiest way to determine whether to hyphenate or where to break a word is to look it up in the dictionary. 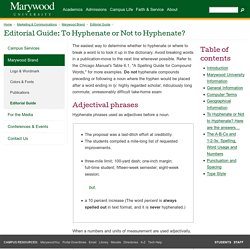 Avoid breaking words in a publication-move to the next line whenever possible. Refer to the Chicago Manual's Table 6.1, "A Spelling Guide for Compound Words," for more examples. Do not hyphenate compounds preceding or following a noun where the hyphen would be placed after a word ending in ly: highly regarded scholar; ridiculously long commute; unreasonably difficult take-home exam Adjectival phrases Hyphenate phrases used as adjectives before a noun. When a numbers and units of measurement are used adjectivally, they should be hyphenated: All, fold, half, like, self, wide, multi Hyphenate compounds that use all whether they precede or follow the noun. Adjectival compounds with fold are spelled solid, unless they are formed with figures. Online hyphenation tool. The Punctuation Guide. For most writers, the hyphen’s primary function is the formation of certain compound terms. 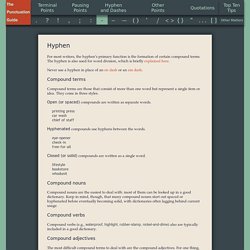 The hyphen is also used for word division, which is briefly explained here. Never use a hyphen in place of an en dash or an em dash. Compound terms Compound terms are those that consist of more than one word but represent a single item or idea. They come in three styles. Open (or spaced) compounds are written as separate words. printing press car wash chief of staff Hyphenated compounds use hyphens between the words. eye-opener check-in free-for-all Closed (or solid) compounds are written as a single word. lifestyle bookstore whodunit Compound nouns Compound nouns are the easiest to deal with: most of them can be looked up in a good dictionary. 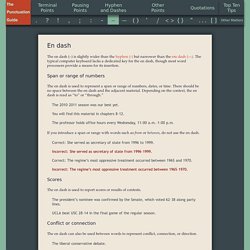 The typical computer keyboard lacks a dedicated key for the en dash, though most word processors provide a means for its insertion. Span or range of numbers The en dash is used to represent a span or range of numbers, dates, or time. There should be no space between the en dash and the adjacent material. Depending on the context, the en dash is read as “to” or “through.” The 2010–2011 season was our best yet. You will find this material in chapters 8–12. The professor holds office hours every Wednesday, 11:00 a.m.–1:00 p.m. If you introduce a span or range with words such as from or between, do not use the en dash. Correct: She served as secretary of state from 1996 to 1999. Incorrect: She served as secretary of state from 1996–1999. Correct: The regime’s most oppressive treatment occurred between 1965 and 1970. Incorrect: The regime’s most oppressive treatment occurred between 1965–1970.

Scores. The Punctuation Guide. The em dash is perhaps the most versatile punctuation mark. 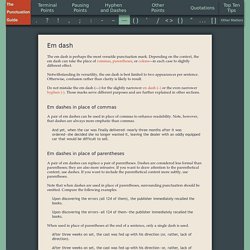 Depending on the context, the em dash can take the place of commas, parentheses, or colons—in each case to slightly different effect. Notwithstanding its versatility, the em dash is best limited to two appearances per sentence. Otherwise, confusion rather than clarity is likely to result. Do not mistake the em dash (—) for the slightly narrower en dash (–) or the even narrower hyphen (-). Those marks serve different purposes and are further explained in other sections. Em dashes in place of commas A pair of em dashes can be used in place of commas to enhance readability. And yet, when the car was finally delivered—nearly three months after it was ordered—she decided she no longer wanted it, leaving the dealer with an oddly equipped car that would be difficult to sell. Em dashes in place of parentheses A pair of em dashes can replace a pair of parentheses. The Punctuation Guide. The slash ( / ), also known as the virgule, has several uses, most of which should be avoided in formal writing. 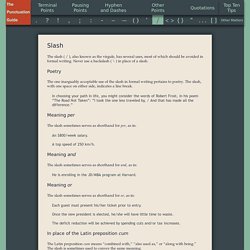 Never use a backslash ( \ ) in place of a slash. Poetry The one inarguably acceptable use of the slash in formal writing pertains to poetry. The slash, with one space on either side, indicates a line break. In choosing your path in life, you might consider the words of Robert Frost, in his poem “The Road Not Taken”: “I took the one less traveled by, / And that has made all the difference.” Meaning per The slash sometimes serves as shorthand for per, as in: An $800/week salary.

A top speed of 250 km/h. Meaning and. The Punctuation Guide. What is underscore? Alternatively referred to as a low line, low dash, and understrike, the underscore ( _ ) is a symbol found on the same computer keyboard key as the hyphen. 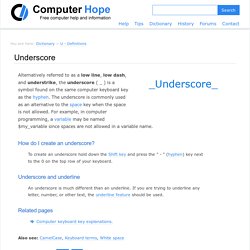 The underscore is commonly used as an alternative to the space key when the space is not allowed. For example, in computer programming, a variable may be named $my_variable since spaces are not allowed in a variable name. How do I create an underscore? To create an underscore hold down the Shift key and press the " - " (hyphen) key next to the 0 on the top row of your keyboard. Underscore and underline An underscore is much different than an underline. Related pages Computer keyboard key explanations. Also see: CamelCase, Keyboard terms, White space.