Uncle Quentin's Spy Chapter 1: Unexpected Visits, a Harry Potter + Buffy: The Vampire Slayer Crossover fanfic. Disclaimer: I do not own Harry Potter or any of the characters in the Harry Potter books or movies. 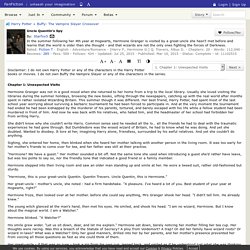 I do not own Buffy the Vampire Slayer or any of the characters in the series. Chapter 1: Unexpected Visits Hermione Granger was not in a good mood when she returned to her home from a trip to the local library. Usually she loved visiting the libraries during the summer holidays, browsing the new books, sifting through the newspapers, catching up with the real world after months spent in rather isolated Wizarding Britain.

This summer though it was different. She didn't know why she couldn't write Harry. Sighing, she entered her home, then blinked when she heard her mother talking with another person in the living room. "Hermione? Hermione stepped into their living room and saw an older man standing up and smile at her. "Hermione, this is your great-uncle Quentin. Her great-uncle - mother's uncle, she noted - had a firm handshake. Hermione blinked. His smile grew wider. Travers nodded. "Ah. Kill the Dark Lord and the Puppeteer! Chapter 1: Seeing the truth, a harry potter fanfic.

To kill the Dark Lord and the Puppeteer! 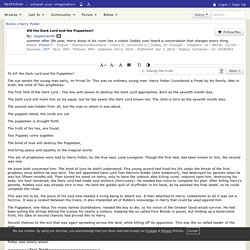 The sun awoke the young man early, on Privet Dr. This was no ordinary young man. Harry Potter Considered a Freak by his family. Was in truth, the child of Two prophesies. The first Told of the Dark Lord….The one with power to destroy the Dark Lord approaches, Born as the seventh month dies. The Dark Lord will mark him as his equal, but he has power the Dark Lord knows not. The second was hidden from all, but the man to whom it was about. The Death of Natasha Romanoff Chapter 1: Exit Natasha Romanoff, a Harry Potter + Avengers Crossover fanfic. A/N: I don't know where this story idea came from. 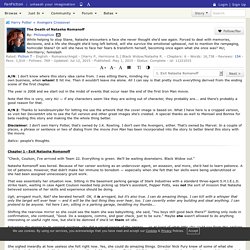 I was sitting there, minding my own business, when wham! It hit me. Then it wouldn't leave me alone. All I can say is that pretty much everything derived from the ending scene of the first chapter. Child's Play Chapter 1: Have We Met?, a harry potter fanfic. "No, sir! 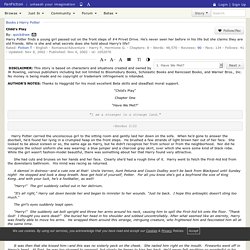 It's just that 'e owes me five quid and I'm not lettin' him outa me sight until 'e pays it back! " "Show these," the Concierge struggled for the least offensive word, "guests to the Honeymoon Suite. " He handed George the key. "Honeymoon Suite? " Returning to the Start Chapter 1, a harry potter fanfic. Harry Potter belongs to JK Rowling, not me; also, a scene near the middle of this chapter was edited. 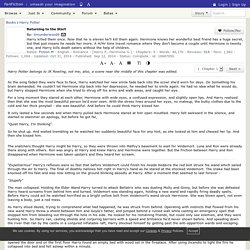 As the song faded they were face to face, Harry watched her new smile fade back into the scowl she'd worn for days. Do Something his brain demanded. He couldn't let Hermione slip back into her depression, he needed her to smile again. He had no idea what he would do, but Harry stopped Hermione when she tried to shrug off his arms and walk away, and caught her eye. For a long moment they stared at each other, Hermione with wide eyes, a confused expression, and slightly open lips. It only lasted a few seconds and when Harry pulled back Hermione stared at him open mouthed. What We're Fighting For Chapter 1: 1 Introductions, a harry potter fanfic.

Introductions It was absolute chaos! 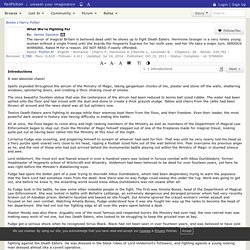 Spells exploded throughout the atrium of the Ministry of Magic, taking gargantuan chunks of tile, plaster and stone off the walls, shattering windows, splintering doors, and creating a thick choking cloud of smoke. The once beautiful fountain statue that was the centerpiece of the atrium had been reduced to tennis ball sized rubble. The water had been spilled onto the floor and had mixed with the dust and stone to create a thick grayish sludge. Tables and chairs from the cafés had been thrown all around and the news stand was all but splinters now.

Twelve Death Eaters were fighting to escape while their enemies kept them from the floos, and their freedom. Harry Potter and Dr Granger's Observation, a harry potter fanfic. The turning point in Harry Potter' life began when Hermione kissed Harry on the mouth instead of the cheek when the teens returned from Hogwarts in June of 1995. 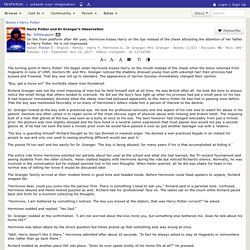 Doctors Mr. and Mrs. Granger noticed the shabbily dressed young man with unkempt hair their princess had bussed and frowned. That boy was not up to standard. The appearance of Vernon Dursley immediately changed their opinion. "Boy, get a move on! " Richard Granger was not the most imposing of men but he held himself well at all time. 260 Going on 16 Chapter 1, a harry potter fanfic.

260 Going on 16 By SciFiFantasyWriter1 Disclaimer: I own nothing of any recognized characters or universes within. 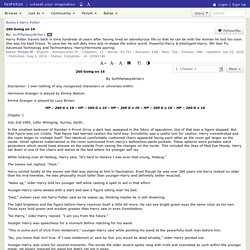 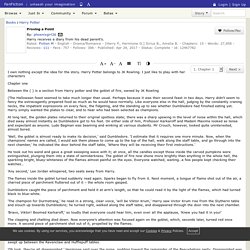 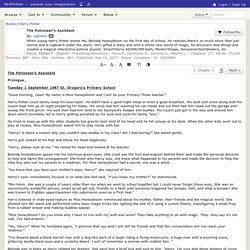 Grogory's Primary School "Good morning, class! My name is Miss Honeybloom and I will be your Primary Three teacher. " Not even a first chance! Chapter 1: The Twist, a harry potter fanfic. Chapter 1: The Twist Omnibus Legal Disclaimer for all chapters: anything you recognise in this story belongs to someone else, most likely to JK Rowling and/or her business partners. Any characters you don't recognise, as well as first names of some you do (where I don't remember what canon had) are completely made up names picked at random from a word list. (Literally! For the geeks among you, it's basically variations on grep '^[A-Z]' /usr/share/dict/words | shuf | head, repeated, if necessary, until I find something I like.)

Omnibus Author Notes: I don't much like author notes in general, so, other than an occasional footnote explaining an obscure reference or allusion, there won't be any. Speaking of reviews, by all means leave a review if you feel strongly about something. A Guardian's Song Chapter 1, a Harry Potter + Oh My Goddess! Crossover fanfic. Disclaimer: I do not own Harry Potter, Oh My Goddess, or Stargate SG-1. This is a non-profit work of fanfiction meant only for entertainment.

A Guardian's Songby Lerris Smith. Escape Chapter 1 - Information Gathering, a harry potter fanfic. A/N Not mine, just my take on a marriage fic. Some OOC characters ahead, you have been warned. "I have to ask you something. Meet me in the Room of Requirements tonight at seven," Hermione said as she passed Harry in the corridor. She moved on, lost in the sea of students walking between classes. She was running out of time; she had nine week's left then the jaws of the trap would be too tight for her to get out.

After her Ancient Runes class, she made her way to the dungeons where Professor Snape's office was. Harry Potter and the Day Walker Chapter 1: Run Away, a harry potter fanfic. AN: I was once again side tracked from my story 'The change of time', for a new one. This time it'll be nice and long. I already have a sequel planed for this baby. This is my SURPRISE crossovers. That's right more than two! I'm excited. Two Warriors Chapter 1, an Aliens/Predator + Harry Potter Crossover fanfic. Disclaimer: I do not own Harry Potter, Alien or Predator, I just write for fun! A/N 1: No Horcruxes, how Voldemort stayed 'alive' explained later in story. A/N 2: Harry and Hermione in this fiction are aged around the 17 – 18 mark; they were simply born earlier than in Canon.

A/N 3: I am having it as the Goblet of Fire was used to select champions before school term started, with written permission from parents and those wanting to compete – except Harry of course, his name still came out unexpectedly. A/N 4: BIG FLASHING NEON SIGN WARNING – This fiction is completely Alternate Universe in regards to Predator/Alien – If you don't like the changes then I suggest you please bear in mind this is Fan fiction, not Canon fiction. The two young warriors, one male and one female had sweat leaking from every pore as they sparred. The 5 foot 9 inch tall female was bare except for a set of bindings to hold her generous breasts still during the fight. What Does It Take To Make You Walk Away Chapter 1, a harry potter fanfic. Chapter one It had been five days since Ron stormed out of the tent, leaving Harry and Hermione alone.

Bridges. Interludes and Vignettes Chapter 1: Hermione's Hidden Facets, a harry potter fanfic. This collection will host drabbles and oneshots that do not fit my other Harry Potter "I have an Idea, Harry" theme as well as those composed by Pax Humana (FFN ID: 3054606) and myself, Cloud Zen (FFN ID: 894440), from ideas that we both decide to explore. In this first case, I happened across a decade old song serving as background music while reading a piece of Harry/Hermione fan fiction, Lucky Harry by Pyrgus. The combination of the two, and the fact that "me" and "Hermione" rhyme, made me wonder about what an Out-Of-Character version of Hermione that might fit the song title would be like. Adorable Violence Chapter 1, a harry potter fanfic. Tournament? Triwizard? Sure Chapter 1: Tournament? Triwizard? Sure!, a harry potter fanfic.

A/N: Revamped, just for you! Set in fourth year where Harry is more proactive and less passive than in cannon. Fight for Her, a harry potter fanfic. A/N: Trying to get my muse back by writing this one-shot. Vengeance? No! Avenger! Chapter 1, a Harry Potter + Avengers Crossover fanfic. Alright, I got an urge to try something a little different. I wanted to see where this would lead so I just started it as a lark, and I'm having some fun with it, so here it is. Again I own nothing! Just playing with someone else's toys! Wizards Suck Chapter 1, a harry potter fanfic. A/N- This fic was inspired by "Harry Potter and the RAF" by Ravengrad, and "Damn Wizards" by sprinter1988. I want to thank them for their brilliant works that have and continue to inspire me in my own.