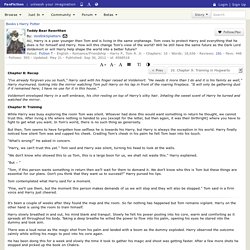 "He needs it more than I do and it is his family as well," Harry murmured, looking into the mirror watching Tom pull Harry on his lap in front of the roaring fireplace. "It will only be gathering dust if it remained here; I have no use for it in this house. " Birthdate Verification Page. According To You, a harry potter fanfic. Prof. 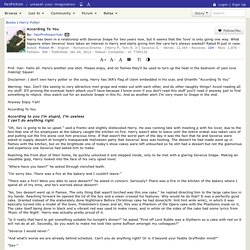 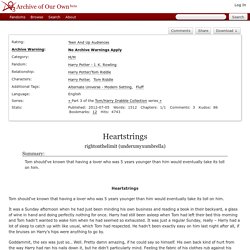 It was a Sunday afternoon when he had just been minding his own business and reading a book in their backyard, a glass of wine in hand and doing perfectly nothing for once. Harry had still been asleep when Tom had left their bed this morning and Tom hadn't wanted to wake him when he had seemed so exhausted. It was just a regular Sunday, really – Harry had a lot of sleep to catch up with like usual, which Tom had respected. He hadn't been exactly easy on him last night after all, if the bruises on Harry's hips were anything to go by. Goddammit, the sex was just so… Well. Tom sipped from his wine and turned a page, pushing his glasses up with his pinky. Tom usually wore contacts as well (he was seriously considering surgery though, he kept losing the damn things) but he just hadn't really wanted to bother with them today. 'Yes, they are. 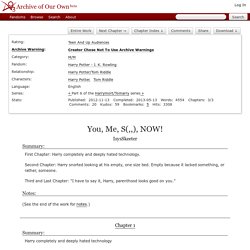 Now don't get him wrong he loved the television (when he was watching his favourite show), the cellphone (how else would he talk to his lover when they were apart?) And the laptop (he had just found this interasting thing called fanfiction). But what he didn't support was when it instead of being used for fun things it was used for work, or worse, to ignore harry.Harry glared at his lover on his office desk, on the cellphone talking with his assistant on the phone while he worked on the laptop.

"Bella, if I have to repeat myself once more you're going to get yourself crucioed into next year and i'll need a new assistant. " Yours, for as long as you'll have me, a harry potter fanfic. Disclaimer: This story is based on characters and situations created and owned by J.K. 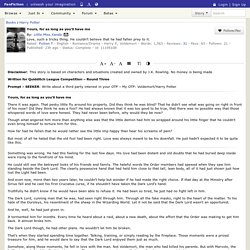 Rowling. No money is being made Written for Quidditch League Competition – Round Three Prompt – SEEKER: Write about a third party interest in your OTP – My OTP: Voldemort/Harry Potter Yours, for as long as you'll have me There it was again. Though what angered him more than anything else was that the little demon had him so wrapped around his little finger that he couldn't even bring himself to torture him for this. 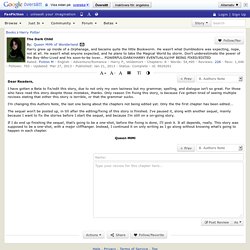 For those who have read this story despite those mistakes, thanks. Only reason I'm fixing this story, is because I've gotten tired of seeing multiple reviews stating that either this story is terrible, or that the grammar sucks. I'm changing this Authors Note, the last one being about the chapters not being edited yet. Only the the first chapter has been edited... The sequel won't be posted up, in till after the editing/fixing of this story is finished. If I do end up finishing the sequel, that's going to be a one-shot, before the fixing is done, I'll post it. Queen MiMi. Voldemort(Tom)/Harry. The One True King - SharaLunison - Harry Potter - J. K. Rowling. Dark angel wooing. Not Ever Again! Chapter 1: Prologue, a harry potter fanfic. Summary: After losing everything he could lose, Harry decides it won't happen again... 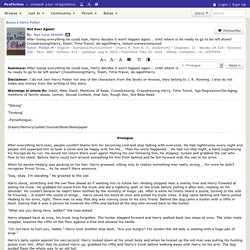 Until where is he ready to go to be left alone? Crossdressing! Harry, Slash, Time-Travel, de-aged! Harry Disclaimer: I do not own Harry Potter nor any of the characters from the books or movies, they belong to J. Warnings in whole fic: Slash, Male Slash, Mentions of Rape, Crossdressing, Crossdressing Harry, Time Travel, Age Regression/De-Aging, mentions of family abuse, Lemon, Sexual Content, Anal Sex, Rough Sex, Not Beta Read "Talking" Servants of the Malleus Maleficarum Chapter 1: Prologue, a harry potter fanfic. This Story contains Drama, Romance, Mystery/Horror, Humour, Swearing Warnings: SLASH, MALE/MALE: LV/HP if this offends you please do not read.Other Pairings: SS/HGDisclaimer: Everything belongs to J.K Rowling'Bold' = Mind Link Speaking Quietwriterofepitaphs has made a music mix for certain parts of 'Servants.' 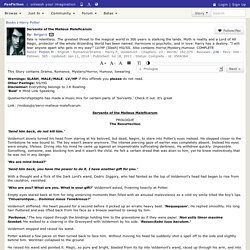 Fire Born Chapter 1: Burn, a harry potter fanfic. A.N.: This idea has been buzzing around my head for a while so here it is! 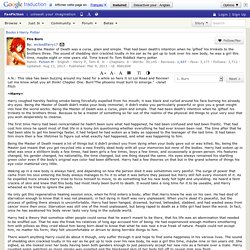 Lol Read and Review! Let me know what you all think! Chapter One: Burn"The phoenix must burn to emerge. " Never Parted, a harry potter fanfic. It was a hot summer day and all of children were outside playing in the park, except for two, Harry Potter and Tom Riddle. 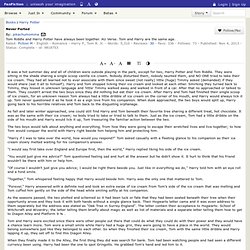 They were sitting in the shade sharing a single scoop vanilla ice cream. Nobody disturbed them, nobody taunted them, and NO ONE tried to take their ice cream. They had all learned not to ever associate with them since sweet (not really) little (huge) Timmy asked (demanded) if they would share (eat it all to himself). Harry and Tom stopped licking their ice cream and looked at each other. Smirking they turned back to Timmy, they hissed in unknown language and 'little' Timmy walked away and walked in front of a car. As fall and later winter approached, one could still find Harry and Tom beneath their favorite tree sharing a different treat, hot chocolate. "Harry if I was to take over the world, how would you respond? " "I would say first take over England and Europe first, then the world," Harry replied liking his side of the ice cream.

Thousands Of Reasons To Smile Chapter 1, a harry potter fanfic. Summary: A Time Travel Story; Harry goes back in time as his eleven year old self and ends up in a orphanage with Tom Riddle at age eleven whom is going to start Hogwarts, can Harry change history? Not Slash between Tom Riddle and Harry. Slash involved. Don't like it, then don't read it! Disclaimer: I own Nothing! Silk Roads Chapter 1, a harry potter fanfic. Summary: When the road you're on is already in the verge of crumbling, you could either choose to foolishly continue onward, or turn back and change paths. Harry decided on the latter. MoD! Harry Pairings: Older Harry/Voldemort, other side pairings Warning: AU, Time-Travel, Universe Hopping, New Identity, Slash (this means Boy/Boy), MasterOfDeath!

Disclaimer: If I were the author of Harry Potter, Dumble would have chocked on a Lemon and drop dead, not AK-ed. Chapter 1: Traveling through space and time In a barely lit room with only an unmade bed and a dark-tainted window, there was a man sitting on a cushioned throne, simply staring outside blankly. Other than his youthful appearance of a late teen, he represents a weary old man with jaded scarlet eyes behind those round framed rose-tinted glasses perched atop his nose. Death's Son - LittleMissXanda - Harry Potter - J. K. Rowling [Archive of Our Own] To Call Your Name - blueshadows - Harry Potter - J. K. Rowling [Archive of Our Own]

The first person Harry caught sight of was his Intended. Riddle was sitting on a loveseat near the fireplace, his formal cloak flung to the side, leaving Riddle's collared shirt visible to the eye. It looked good on him, especially because it was well-fitted and clung to every one of his muscles. Harry averted his eyes when he found his vision trailing lower and concentrated on the other people in the room. Dorea Black sat on another loveseat, her posture stiff and her hands folded quite neatly in her lap. Her husband didn't share the same sentiment as her and he was jumping to his feet as soon as Harry made his presence known. "Harry, how you have grown," said Charlus the moment he released Harry from his grip and then he sighed sadly. Harry smiled awkwardly, and then yelped as he was pulled quite forcibly down onto the loveseat. "Your father wasn't always like this.