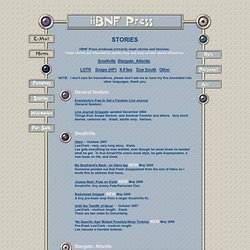 " "The colourful term "slash" refers to the convention of employing a stroke or "slash" to signify a same-sex relationship between two characters (Kirk/Spock or K/S) and specifies a genre of fan stories positing homoerotic affairs between series protagonists... slash originated as a subgenre of fan writing with Star Trek fandom in the early 1970s... if 90% of all fan fiction is written by women...slash remains an even more exclusively feminine genre...The narrative formula of slash involves a series of movements from an initial partnership, through a crisis in communication that threatens to disrupt that union, towards it's reconfirmation through sexual intimacy. 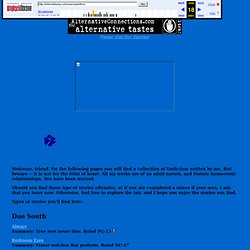 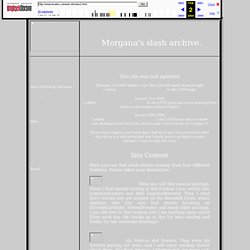 Thanks! January 30th 2004 I added part 5 of Behind Emerald Eyes to the LOTR page and two more cute drawings from KIA to the fan art page. Miriam Heddy's Little Corner of the Universe. My Adult Fanfiction Page. My Adult Fanfiction page GENERAL WARNING:The following stories are mostly slash, that means, they feature a same sex sexual relationship (mostly male/male) between two characters of a series. 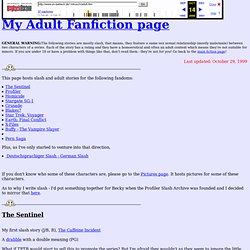 Each of the story has a rating and they have a homoerotical and often an adult content which means they're not suitable for minors. Welcome to Mona's Fiction Page! Last updated August 15, 2000 fic lists and archivesupdated August 15, 2000older storiesupdated August 11, 2000the surveyupdated June 29, 2000random madnesseschanged August 11, 2000love heals: affiliate programsupdated July 13, 2000 fic lists and archives faq The following is a comprehensive list of the mailing lists I run: monaslash is the list for my writing, plus the occasional update regarding other projects I am working on. 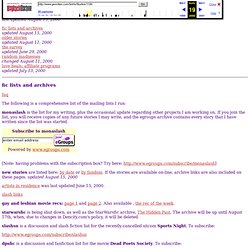 [Note: having problems with the subscription box? Fiction. Welcome! 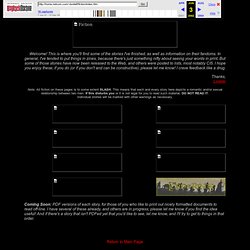 This is where you'll find some of the stories I've finished, as well as information on their fandoms. In general, I've tended to put things in zines, because there's just something nifty about seeing your words in print. Llwyden's Fanfiction. Literary Creations of little Alex. Lianne's Homepage. Keelywolfe's Fanfiction. Kay's Asylum Journal. Katsudon.net. Fiction Page. Undefined All of the fiction presented here is Slash in nature--that is, dealing with homosexual pairings. 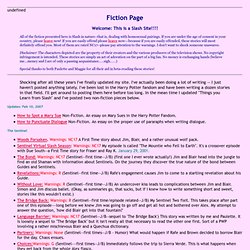 If you are under the age of consent in your country, please leave now! If you are easily offend please leave now---because if you are easily offended, these stories will most definitely offend you. Most of them are rated NC17--please pay attention to the warnings. I don't want to shock someone unawares. Disclaimer: The characters depicted are the property of their creators and the various producers of the television shows. Special thanks to both Paulette and Maggie for all their aid in beta-reading these stories! Shocking after all these years I've finally updated my site. Updates: Feb 10, 2007 How to Spot a Mary Sue Non-Fiction. 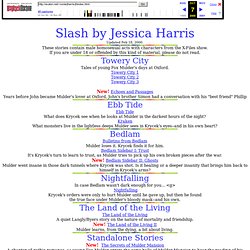 These stories contain male homosexual acts with characters from the X-Files show. If you are under 18 or offended by this kind of material, please do not read. Towery CityTales of young Fox Mulder's days at Oxford. Towery City 1Towery City 2Towery City 3.New! Fanfiction by Jade. Welcome to Jaded, an archive of fanfiction from various fandoms written by Jade. 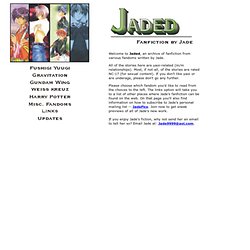 All of the stories here are yaoi-related (m/m relationships). Most, if not all, of the stories are rated NC-17 (for sexual content). If you don't like yaoi or are underage, please don't go any further. Untitled. This site contains slash material. If you do not understand what slash is, do not enjoy slash, or if you are not of sufficient legal age to view such material, please leave now. By clicking on the links you signify that you fully understand what you are about to view and take full responsibility for your actions.

The contents of this site are protected by the First Amendment, the Fair Use laws, and the rights of parody. Note that all contents refer to fictional works and characters. Nothing is implied about real persons, living or dead. All comments should be directed here. Spec Page. I have here for your perusal, several stories from various fan genres. You will find here stories for Anne Rice Vampire Chronicles, Highlander the Series and The Sentinel. As I write more stories, they will be added here. DISCLAIMER: All of these stories are not-for-profit, amature efforts. All copyrighted characters belong to their copyright holders, and no copyright infringement is intended and all rights are reserved to them. The Inner Sanctum. Home of Summer Rain. The fan fiction on this page is of an adult nature, therefore if you are under 18 or are disturbed by slash stories (m/m) please do not proceed.

The fight for online free speech goes now to the Supreme Court. Follow the link to read about our victory and the road ahead of us. Digital Doomsday Clock By the way, you are really visitor to this page since April 27, 1998. Organ donors save lives, to find out more visit Transweb Created April 5, 1997. Grey's Corner. Index. F.e.t.i.s.h. Bette's Fanfiction. Index. Adoratrice's Sentinel Fiction. After Blair loses his memory, can he and Jim rebuild their relationship? (NOTE: This was originally published as a zine by Mysti Frank, and I'm posting it here with her permission.) Temper, Temper (slash, rated NC-17): Blair comes home in a bad mood. Beware the Guides of March (slash, rated PG-13): Jim can't find his car keys, and Blair knows why.Conversation (slash): Valentine sappiness.Coming Down (slash): A first time story.

If you are under the age of consent in your area or such material bothers you, please return to the main page now. Cori Lannam's Fan Fiction. At long last, I've started updating this place again. Lanning Cook's Fiction. Site Directory. Chez Crysothemis. Index-new. Alexis Rogers' Fiction. Welcome to the fiction of Alexis Rogers. Scrawlings. Because we should all read lots of slash! Fanfiction by Nimori. Quercus/Lemon Drop. Juxian Tang. Cmshaw's Fanfic. Barb G's Multi-FanPlex. An archive for original fiction and fanfiction. Slash & Fan Fiction Archive.

DISCLAIMER: Not ours, we know. Lust in the Dust Archives. The Nesting Place: Author Index. Slash Archive. The Complete Kingdom of Slash.