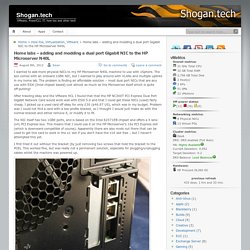 The box comes with an onboard 1GBit NIC, but I wanted to play around with VLANs and multiple uplinks in my home lab. The problem is finding an affordable solution – most dual port NICs that are any use with ESXi (Intel chipset based) cost almost as much as the Microserver itself which is quite off-putting! After trawling ebay and the VMware HCL I found that that the HP NC360T PCI Express Dual Port Gigabit Network Card would work well with ESXi 5.0 and that I could get these NICs (used) fairly cheap. I picked up a used card off ebay for only £30 ($46.97 US), which was in my budget. Problem was I could not find a card with a low-profile bracket, so I thought I would just make do with the normal bracket and either remove it, or modify it to fit.

The NIC itself has two 1GBit ports, and is based on the Intel 82571EB chipset and offers a 4 lane (x4) PCI Express bus. Expansion Cards - HP MicroServer N40L Wiki. Expansion PCI cards and other devices proven to work SATA Cards. 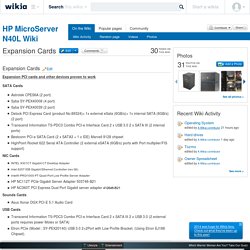 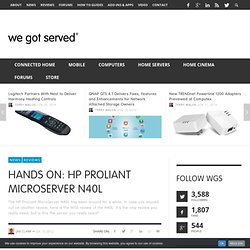 I chose Windows Home Server 2011 simply because it is the current shipping Microsoft-base home server operating system. While I did not install it on this machine, I have installed SBS 2011 Essentials as well as the beta for Windows Server 2012 Essentials on the older N36L MicroServer without a problem. Both operating systems have performed quite well on that model. In addition, I will not bore you with a Dashboard setup. I think most of you have seen and/or performed a WHS install and setup. I will make note of 2 items. In addition, any and all drivers were installed as part of the base installation. At this point, I installed 64 “important”and 1 “optional” update.

After Update 1: After Update 2: While we had one failure, it corrected itself on the second run and this was surprisingly all that was required to bring the operating system up to date. We are now ready to see how this server performs. HP MicroServer N40L Wiki. Raid - HP MicroServer N40L Wiki. Hi All, I've had success with a Sun Branded Adaptec 5805 that I bought off ebay quite cheaply ( £30 ) and 4 x Western Digital 3TB Red's in RAID5. 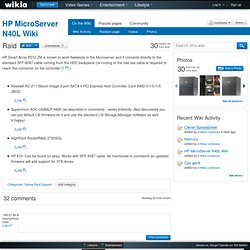 The card had the stock Sun firmware on it which doesn't work for the drives. On the card there is a jumper ( J8, next to a small inscription of the word 'flash' ). Adding the jumper to this sets what is known as mode 0 ( which allows you to re-flash the card ). With this jumper set when you boot the system you do not see the 'Adaptec BIOS' prompts, this is expected behaviour. I downloaded the latest Adaptec firmware for the card and made a USB boot drive using the Rufus FreeDOS tool ( which automatically creates the bootable drive ).

If you run the utility tool by default it will fail to flash the card as it has a different OEM identifier. Afc.exe UPDATE /SkIp This will run and re-flash the card, you can then remove the jumper and reboot. Hope this helps! HP ProLiant N54L: Windows Server 2012 R2 installation using Mod BIOS. There is a lively discussion about a problem with the servers of the Micro Generation 7 (ProLiant N36L, N40L and N54L), where an installation of Windows Server 2012R2 and Windows 8.1 updated by Microsoft was not possible due to changed driver stacks. 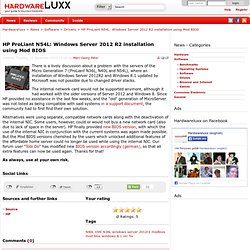 The internal network card would not be supported anymore, although it had worked with the older versions of Server 2012 and Windows 8. Since HP provided no assistance in the last few weeks, and the "old" generation of MicroServer was not listed as being compatible with said systems in a support document, the community had to first find their own solution.

Alternatives were using separate, compatible network cards along with the deactivation of the internal NIC. Some users, however, could or would not buy a new network card (also due to lack of space in the server). HP finally provided new BIOS version, with which the use of the internal NIC in conjunction with the current systems was again made possible. As always, use at your own risk. HP N36L/N40L/N54L Microserver Updated AHCI BIOS Support. HP ProLiant MicroServer N40L Owner's Thread. Drivers & software for HP ProLiant MicroServer - HP Support Center.