Family - It's in the Blood, a harry potter fanfic. Disclaimer: I don't own Harry Potter or Stargate. 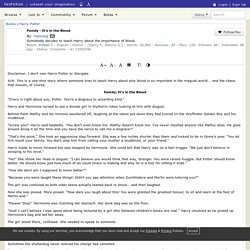 A/N: This is a one-shot story where someone tries to teach Harry about why blood is so important in the magical world... and the chaos that ensues, of course. Family; It's in the Blood "Draco is right about you, Potter. You're a disgrace to wizarding kind. " Harry and Hermione turned to see a blonde girl in Slytherin robes looking at him with disgust. Behind them Malfoy and his minions sauntered off, laughing at the latest put down they had scored on the Gryffindor Golden Boy and his mudblood. "Screw you! " "That's the point. " Harry made to move forward but was stopped by Hermione. "Ha! " "How the devil am I supposed to know better? " "Because you were taught these things! The girl was confused as both older teens actually leaned back in shock… and then laughed. Now she was pissed. "Please! "God! The girl stood there, confused. It was two days later. Somehow the shutterbug never noticed his charge had vanished.

"Again? " "Wait! Harry frowned at her. Hot Shower, a harry potter fanfic. Note: This idea came to me after a rough day at work topped by getting caught in a cold rain while at the half way point of a after work 10 mile bike ride. 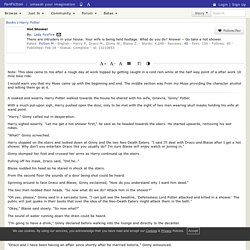 I would warn you that my Muse came up with the beginning and end. The middle section was from my Muse providing the character alcohol and letting them go at it. A soaked and wearily Harry Potter walked towards the house he shared with his wife, Ginevra, 'Ginny' Potter. With a much put-upon sigh, Harry pushed open the door, only to be met with the sight of two men wearing skull masks holding his wife at wand point.

"Harry," Ginny called out in desperation. Pranking The Tournament Chapter 1, a harry potter fanfic. Hello everybody! 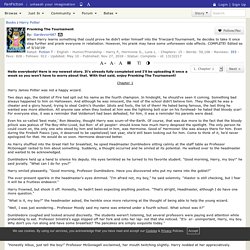 Here is my newest story. It's already fully completed and I'll be uploading it once a week so you won't have to worry about that. With that said, enjoy Pranking The Tournament! Chapter 1. Red Storm Chapter 1, a Star Wars + Harry Potter Crossover fanfic. I was bored, the idea popped up, it became a thing, enjoy! 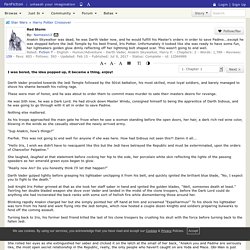 Darth Vader prowled towards the Jedi Temple followed by the 501st battalion, his most skilled, most loyal soldiers, and barely managed to shove his shame beneath his roiling rage. These were men of honor, and he was about to order them to commit mass murder to sate their masters desire for revenge. A Witch and an Amazon Walk into a Bar Chapter 1: Beginner's Luck, a Harry Potter + Wonder Woman Crossover fanfic.

A Witch and an Amazon Walk into a Bar... 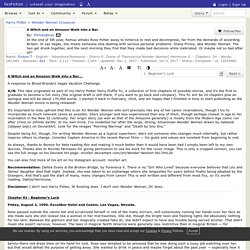 A response to Blood Brandy's Vegas Vacation Challenge. A/N: This idea originated as part of my Harry Potter Story Fluffle fic, a collection of first chapters of possible stories, and it's the first to graduate to become a full story (the original draft is still there, if you want to go back and compare). This fic will be 24 chapters plus an epilogue and will be about 170,000 words. I started it back in February, 2016, and am happy that I finished in time to start publishing as the Wonder Woman movie is being released! It's important to note upfront that this is an AU Wonder Woman who isn't precisely like any of her canon incarnations, though I try to incorporate as much relevant canon as possible. Harry Potter and the Gang of Giggling Girls Chapter 1, a harry potter fanfic. Harry Potter and the Gang of Giggling Girls. by Glee-chan Disclaimer: This is a fan fiction, and as such is not authorized, prepared, licensed, or endorsed by J.K. 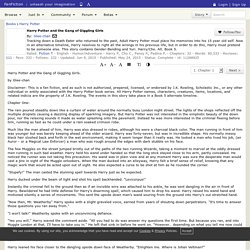 Rowling, Scholastic Inc., or any other individual or entity associated with the Harry Potter book series. The Favour Chapter 2: Act 2, a harry potter fanfic. Morning light cut a sharp angle across the two sleeping bodies - quite naked - barely draped in white bedding. 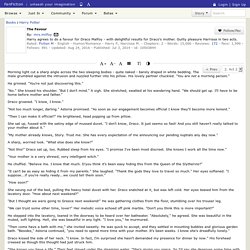 The male grumbled against the intrusion and nuzzled further into his pillow. His lovely partner chuckled. A Witch and an Amazon Walk into a Bar Chapter 1: Beginner's Luck, a Harry Potter + Wonder Woman Crossover fanfic. The Fem Harry Short Stories Chapter 1: The Black Widow, a harry potter fanfic. My thanks to White Angel of Auralon, whose "Hunt" and questionablequotation's "If Looks can Kill" gave me the inspiration and permission to write these short stories. 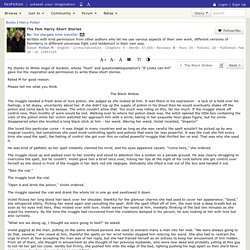 Rated M for good reason. Please tell me what you think. The Black Widow. The muggle needed a fresh dose of love potion, she judged as she looked at him. It was there in his expression - a lack of a hold over his feelings, a bit dopey, uncertainty about her. She loved this particular curse - it was illegal in many countries and as long as she was careful the spell wouldn't be picked up by any magical country, but sometimes she used mind-controlling spells and potions that were far less powerful.

He was kind of pathetic as her spell instantly claimed his mind, and his eyes appeared vacant. The muggle stood up and walked over to her silently and stood to attention like a soldier on a parade ground. "Take the vial. " Prophetic Intervention Chapter 1: The Plan of the three 'A's, a harry potter fanfic. The Plan of the Three 'A's Alastor 'Mad-Eye' Moody, paranoid-skilled-insane Auror Supreme, had turned up at the Hog's Head pub for a chat with Abe, before going off to the Castle to meet Albus, Abe's brother. 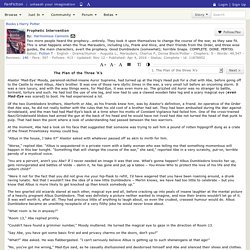 It was one of those rare idyllic times in the war, a very small lull before an oncoming storm. It was a rare luxury, and with the way things were, for Mad-Eye, it was even more so. The grizzled old Auror was no stranger to battle, torment, torture and such. He had lost the use of one leg, and now had to use a clawed wooden fake leg and a scary magical eye (even Mad-Eye was scared) to boot. Lord and Ladies Chapter 1: Surprise, a harry potter fanfic. Lord and Ladies With Voldemort resurrected, Dumbledore needed to find a shortcut, enabling the light faction to gain power and stand a chance against the dark. 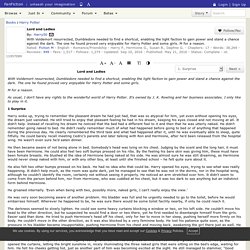 The one he found proved very enjoyable for Harry Potter and some girls. M for a reason. As usual, I don't have any rights to the wonderful world of Harry Potter. The Templar Death, Shaken not Stirred, a harry potter fanfic. Harry Potter and Salazar Slytherin are meant to look a bit like Caspian X from the second Narnia film Rowena Ravenclaw is meant to look a bit like Arwen from LOTR minus the sticky-out pointy ears. Harry was restless. Since Voldemort's resurrection, he had endured nightmares of the graveyard at Little Hangleton. The Dursley's were, for the most part, leaving him alone. Eventually, he chose to disregard Dumbledore's orders of confinement and isolation and summoned the Knight Bus with an outstretched wand after he heard the light snores and drunken stench of one of Dumbledore's assigned guards.

"Welcome to the-" Stan Shunpike began. "Diagon Alley please Stan. " said Harry, handing him a galleon. Revenge of the Wizard Chapter 1: Welcome to Despayre, a Star Wars + Harry Potter Crossover fanfic. Revenge of the Wizard A Fanfic by Darth Marrs, Author's Notes: No soul bonds, no lemons, no harems. When I started this, the Master of Death Harry was not yet a cliché. Now it is. So, be warned I use that cliché.

And no, I don't own either of the properties. It's Always The Quiet Ones, a harry potter fanfic. Usual disclaimer, characters belong to their original creators. No commercial use, for private enjoyment only Apply externally I'm not wildly fond of the Harry Potter universe, although there are a few good fanfics based on it. On the whole it's far too limiting in a number of ways. The books are well-written, the movies were mostly amusing, but I've never read most of the former and only seen about two thirds of the latter. Just generally not my cup of tea, essentially. That said, this came to me more or less fully fleshed and I couldn't move on until I wrote it. The Noble and Most Ancient House of Black, a harry potter fanfic. Disclaimer: JKR owns Harry Potter.

The Italicized portion at the beginning was taken directly from The Order of the Phoenix. Nothing is mine except for the idea. Only one couple were still battling, apparently unaware of the new arrival. Harry saw Sirius duck Bellatrix's jet of red light: He was laughing at her. "Come on, you can do better than that! " The second jet of light hit him squarely on the chest. The laughter had not quite died from his face, but his eyes widened in shock. Ah, Screw It! Chapter 1, a Stargate: SG-1 + Harry Potter Crossover fanfic. Disclaimer: I don't own Harry Potter or Stargate. I've read a fair amount of stories where characters get a 'do-over'. Most of my stories are attempts to re-write the originals by inserting a new factor. In this story Harry goes back in time.

However, instead of attempting to be subtle... he pretty much says: Ah, Screw It! This time round is for his enjoyment... as far as he is concerned at least. The crossover doesn't fully take off until about fourth year. "Ah, Mr. "Huh? Play to Your Strengths Chapter 1, a harry potter fanfic. Disclaimer - I do not own the Harry Potter series nor do I make any money from this fic Bad Author Notes: I'm reposting this story after making some changes slight changes to it. Mystic Knight Online Chapter 1: An Opportunity and an Unwanted Trip, a Harry Potter + Sword Art Online/ソードアート・オンライン Crossover fanfic. Mystic Knight Online Disclaimer: I should come up with something witty saying that Harry Potter and Sword Art Online aren't mine. Or simply acknowledge that doing this falls under the principle of Fair Use under the Copyright act of 1976.