Portraits. Portraits are paintings made of certain individuals, namely witches and warlocks.[1] The subject of a magical portrait is sentient due to enchantments placed on the portrait by the painter.[2] The portrait will be able to use some of the subject's favourite phrases and imitate their general demeanour based on how the subject appears to the painter; however, they are limited in what they can say or do.[2] A portrait can also move from portrait to portrait, or else visit a portrait of them elsewhere in the world.[3] Bimp, Oliver Cartwright, John Homme, Luxo Karuzos, Pablo Picasso and Leonardo Da Vinci were all expert painters. 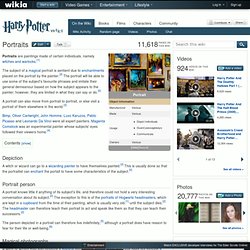 Magenta Comstock was an experimental painter whose subjects' eyes followed their viewers home.[4] Depiction A witch or wizard can go to a wizarding painter to have themselves painted.[2] This is usually done so that the portraitist can enchant the portait to have some characteristics of the subject.[2] Portrait person Magical photographs Known portraits. Elizabeth Burke. "Seen and not heard; that's what children should be. 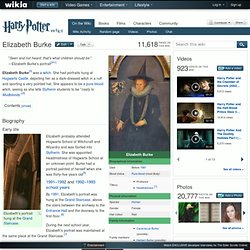 " Elizabeth Burke[3] was a witch. She had portraits hung at Hogwarts Castle, depicting her as a dark-dressed witch in a ruff and sporting a very pointed hat. She appears to be a pure-blood witch, seeing as she tells Slytherin students to be "nasty to Mudbloods. "[4] Biography Early life Elizabeth probably attended Hogwarts School of Witchcraft and Wizardry and was Sorted into Slytherin. 1991–1992 and 1992–1993 school years By 1991, Elizabeth's portrait was hung at the Grand Staircase, above the stairs between the archway to the Entrance Hall and the doorway to the first-floor.[6] During the next school year, Elizabeth's portrait was maintained at the same place at the Grand Staircase.[7] 1995–1996 school year By 1995 her portrait was no longer hung by the first-floor landing of the Grand Staircase, but two floors below, at the Entrance Dungeon. 1996–1997 school year One of her portraits was hung in Malfoy Manor.[9] 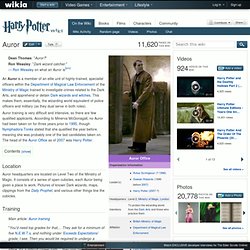 " Ron Weasley: "Dark wizard catcher. " An Auror is a member of an elite unit of highly-trained, specialist officers within the Department of Magical Law Enforcement of the Ministry of Magic trained to investigate crimes related to the Dark Arts, and apprehend or detain Dark wizards and witches. This makes them, essentially, the wizarding world equivalent of police officers and military (as they dual serve in both roles). Auror training is very difficult and intensive, so there are few qualified applicants. According to Minerva McGonagall, no Auror had been taken on for three years prior to 1995, though Nymphadora Tonks stated that she qualified the year before, meaning she was probably one of the last candidates taken on. Location. Wizards' Ordinary Magic and Basic Aptitude Test. "Unlike the O.W.L.s, the W.O.M.B.A.T.s consist exclusively of written papers. 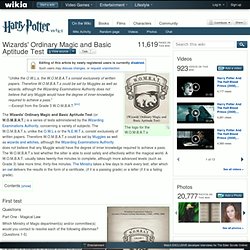 Therefore W.O.M.B.A.T.s could be sat by Muggles as well as wizards, although the Wizarding Examinations Authority does not believe that any Muggle would have the degree of inner-knowledge required to achieve a pass. " —Excerpt from the Grade 3 W.O.M.B.A.T. [src] The Wizards' Ordinary Magic and Basic Aptitude Test (or W.O.M.B.A.T.) is a series of tests administered by the Wizarding Examinations Authority, concerning a variety of subjects. The W.O.M.B.A.T.s, unlike the O.W.L.s or the N.E.W.T.s, consist exclusively of written papers.

First test Questions Part One - Magical Law Which Ministry of Magic department(s) and/or committee(s) would you contact to resolve each of the following dilemmas? Nastily Exhausting Wizarding Test. A Nastily Exhausting Wizarding Test (often abbreviated N.E.W.T.) is a subject-specific exam that seventh year wizards and witches at Hogwarts School of Witchcraft and Wizardry take to help them pursue certain careers after their graduation. 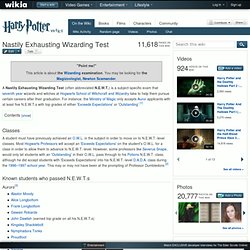 For instance, the Ministry of Magic only accepts Auror applicants with at least five N.E.W.T.s with top grades of either 'Exceeds Expectations' or 'Outstanding'.[1] Classes Known students who passed N.E.W.T.s Aurors[3] Healers[4] Others. Potions (class) "There will be no foolish wand-waving or silly incantations in this class. 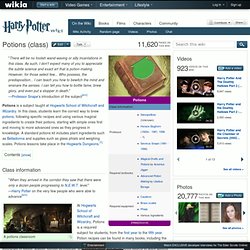 As such, I don't expect many of you to appreciate the subtle science and exact art that is potion-making. However, for those select few... Who possess, the predisposition... I can teach you how to bewitch the mind and ensnare the senses. I can tell you how to bottle fame, brew glory, and even put a stopper in death. " Hogwarts School of Witchcraft and Wizardry. Hogwarts School of Witchcraft and Wizardry is the British wizarding school, located in the Scottish Highlands.[1][2] It takes students from the United Kingdom of Great Britain and Northern Ireland, and also the Republic of Ireland.[3][4] The castle is located in the mountains near a loch. 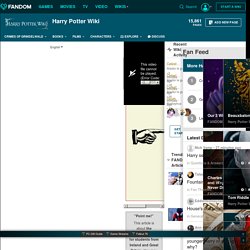 The precise location of the school can never be uncovered because it was rendered Unplottable. To Muggles, the school looks like an old abandoned castle. Similarly, most wizarding schools locations are protected in order to prevent their ways of teaching being revealed, as well as protect the students and schools themselves from any harm. Established around the 10th century, Hogwarts is considered to be one of the finest magical institutions in the Wizarding World, though other notable schools included Beauxbatons Academy of Magic in France, the Durmstrang Institute in Scandinavia, and Ilvermorny School of Witchcraft and Wizardry in the United States. 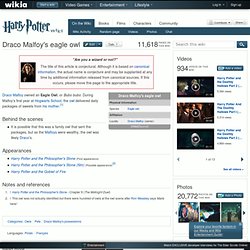 During Malfoy's first year at Hogwarts School, the owl delivered daily packages of sweets from his mother.[1] Behind the scenes It is possible that this was a family owl that sent the packages, but as the Malfoys were wealthy, the owl was likely Draco's. Appearances Notes and references. Hogwarts Library. The Hogwarts Library is located on the third floor of Hogwarts Castle and contains tens of thousands of books on thousands of shelves. 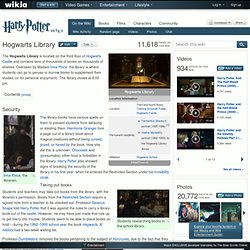