Reborn Chapter 1, a Harry Potter + Avengers Crossover fanfic. Disclaimer: I own nothing! 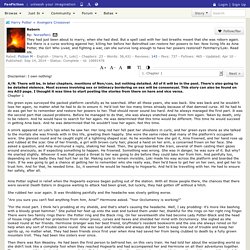 A/N: There will be, in later chapters, mentions of Non/con, but nothing detailed. All of it will be in the past. There's also going to be detailed violence. Most scenes involving sex or intimacy bordering on sex will be consensual. This story can also be found on my AO3 page. His green eyes surveyed the packed platform carefully as he searched.

A smirk appeared on Loki's lips when he saw her. Aina Potter sighed in relief when the Hogwarts express began pulling out of the station. She rubbed her scar again. "Are you sure you can't feel anything from him, Aina? " "For the most part. Then there was Ron Weasley. Next was Neville Longbottom. Luna Lovegood was another of the compartment's occupants. Finally, there was Ginny Weasley. Aina smiled slightly. A/N: What do you think? The Sum Of All Your Fears, a Harry Potter + Avengers Crossover fanfic. My internet went in the middle of uploading this, so some sites were updated a day before other sites. 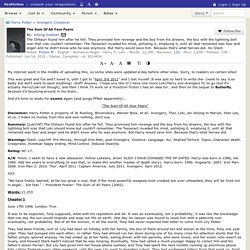 Sorry, to readers on certain sites! This was great and fun and I loved it, until I got to "April 3rd 2011" and I lost myself. It was just so hard to write the- (want to say it so badly but don't want to spoil anything) -stuff! Anyway. I hope you like it! And it's time to study for exams again (and purge FFNet apparently)… "The Sum Of All Your Fears" Disclaimer: Harry Potter is property of JK Rowling, Bloomsbury, Warner Bros, et all. Summary: [Loki/HP] The Chitauri found him after he fell. Warnings: Slash. Rating: NC-17. A/N: Hmm. "We have finally learned, at far too great a cost, that if the most powerful weapons ever created are ever unleashed, they will be fired not in anger... but fear. " – President Fowler: The Sum of All Fears (2002). Adrian Romanov Chapter 21, a Harry Potter + Avengers Crossover fanfic. It had been two months since Adrian came to Asgard, properly this time...and he still hadn't heard from Abigail. 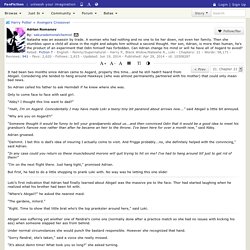 Considering she tended to hang around Hawkeye (who was almost permanently partnered with his mother) that could only mean bad news. So Adrian called his father to ask Heimdall if he knew where she was. Only to come face to face with said girl. "Abby? I thought this line went to dad? " "Yeah, I'm on Asgard. "Why are you on Asgard?! " "Someone thought it would be funny to tell your grandparents about us...and then convinced Odin that it would be a good idea to meet his grandson's fiancee now rather than after he became an heir to the throne.

Adrian groaned. "Dammit. "In any case could you return so these musclebound morons will quit trying to hit on me? The Sum Of All Your Fears, a Harry Potter + Avengers Crossover fanfic. Reborn - CelticWonder - The Avengers (2012), Harry Potter - J. K. Rowling [Archive of Our Own] The Triumph of These Tired Eyes Chapter 1: Prologue, a Harry Potter + Avengers Crossover fanfic. A/N: Alright, here we go, it's been awhile since I've posted anything on Fanfiction so I'm a bit excited (more than just a bit). 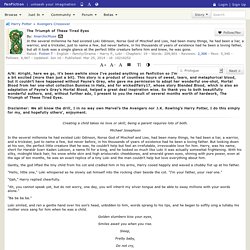 This story is a product of countless hours of sweat, tears, and metaphorical blood, but it couldn't have happened without Payne's Gray, who gave me permission to adopt her wonderful one-shot, Mortal Blood from her one-shot collection Bunnies in Hats, and for wickedlfairy17, whose story Blended Blood, which is also an adaptation of Payne's Gray's Mortal Blood, helped a great deal inspiration wise. So thank you to both beautifully wonderful authors, and, without further ado, I present to you the result of several months worth of hardwork, The Triumph of These Tired Eyes. Disclaimer: We all know the drill, I in no way own Marvel's the Avengers nor J.K. Rowling's Harry Potter, I do this simply for my, and hopefully others', enjoyment.

Creating a child takes no love or skill; being a parent requires lots of both. Michael Josephson.