Petal Chapter 34, a Harry Potter + Avengers Crossover fanfic. Petal - Chapter 34: Disclaimer: I still have not obtained any legal rights to either Harry Potter or Iron Man/Avengers and their affiliated franchises. 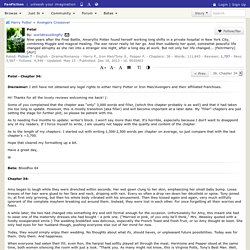 Hi! Thanks for all the lovely reviews welcoming me back! (: Some of you complained that the chapter was "only" 3,000 words and filler, (which this chapter probably is as well) and that it had taken me too long to update. As to needing five months to update: writer's block. As to the length of my chapters: I started out with writing 1,500-2,500 words per chapter on average, so just compare that with the last chapter's ~3,700. Hope that cleared my formatting up a bit. Have a great day, Beta: Bloodfox 64 Chapter 34: Amy began to laugh while they were drenched within seconds.

A while later, the two had changed into something dry and still formal enough for the occasion. Today, they would simply enjoy their wedding. Pepper chuckled. Pepper laughed. Child Of Iron Chapter 9: Mistaken For a Mutant, a Harry Potter + Avengers Crossover fanfic. The Passing of Time, a Harry Potter + Avengers Crossover fanfic. Prologue Master of Death The problem with being the Master of Death, Harry realized, was that although he can't seem to grow older than 20, he can still "die". 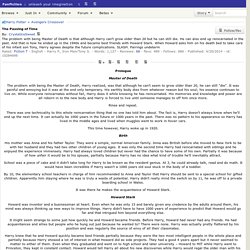 It was painful and annoying but it was at the end only temporary. His earthly body dies from whatever reason but his soul; his essence continues to live on. Heroically Blind Chapter 4: Surviving Blind, a Harry Potter + Avengers Crossover fanfic. Tony watched his brother out of the corner of his eye. 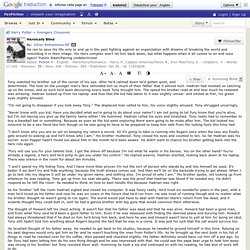 After he'd calmed down he'd gotten quiet, and determined. The look on the younger man's face reminded him so much of their father that it almost hurt. Hadrian had insisted on catching up on the times, and as such he'd been devouring every book Tony brought him. The speed his brother read at and how much he retained was amazing. Hadrian looked up from his laptop- and how fast the kid had taken to it was slightly unreal- and smiled at him, his green eyes slightly amused. "I'm not going to disappear if you look away Tony. " "Never know with you kid. "I don't know why you are so set on keeping my return a secret. "Fury will use you for your talents brat. The Stark Chronicles Chapter 8, a Harry Potter + Avengers Crossover fanfic. AN:- Hey All! 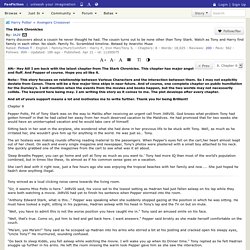 I am back with the latest chapter from The Stark Chronicles. This chapter has major angst and fluff. And Pepper of course. Hope you all like it. Note:- This story focuses on relationship between Various Characters and the interaction between them.

Awakening Chapter 45: Interrupted Explanations(unbeta'd), a Harry Potter + Avengers Crossover fanfic. Awakening *Insert your preferred disclaimer here* Third POV Fawkes still hadn't forgiven Tony, and therefore was staying far away from him, or as far away as Thor's shoulder would allow him to be. 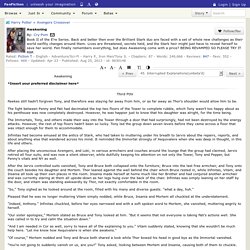 The fight between Penny and Fati had decimated the top two floors of the Tower to complete rubble, which Tony wasn't too happy about as his penthouse was now completely destroyed. However, he was happier just to know that his daughter was alright, for the time being. The Immortals, Tony, and others made their way into the Tower through a door that had surprisingly, had not been destroyed by the energy attacks. Infinitas had become amused at the antics of Stark, who had taken to muttering under his breath to Jarvis about the repairs, reports, and about anything else that wandered across his mind. After the Jarvis controlled suits vanished, Tony and Bruce both collapsed onto the furniture; Bruce into the last free armchair, and Tony onto the couch besides his daughter and Mortem. 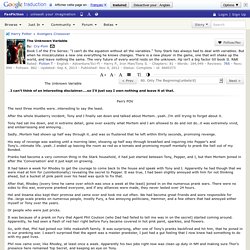 Pen's POV The next three months were…interesting to say the least. Menagerie of Birds Chapter 1: The boy who loves birds, a Harry Potter + Avengers Crossover fanfic. Yay, as I'm into Marvel films and fanfiction at the moment, I decided to write a Harry Potter/Avengers fanfic. 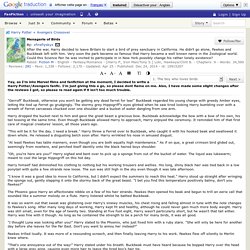 I'm just giving this a go, so please dont flame on me. Also, I have made some slight changes after the reviews I got, so please re read again if it isn't too much trouble. "Gerroff' Buckbeak, otherwise you won't be getting any dead ferret for tea! " Buckbeak regarded his young charge with greedy Amber eyes, letting the tied up Ferret go grudgingly. The stormy grey Hippogriff's eyes glinted when he saw tired looking Harry bumbling over with a wreath of Ferret carcasses chucked over one shoulder and a bucket of water dangling from one arm. Harry dropped the bucket next to him and gave the great beast a gracious bow. "This will be it for the day. "At least Fawkes has table manners, even though you are both equally high maintenance. " "Oh, you're here are you? " Harry himself had diminished his clothing to nothing but his working trousers and wellies. Fawkes trilled loudly. Iron Scales Chapter 1 - Prologue, a Harry Potter + Ironman Crossover fanfic. 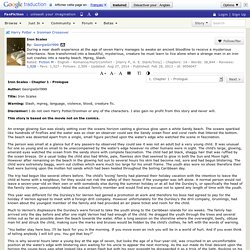 Everything I do Chapter 1: As the Seventh Month Dies, a Harry Potter + Avengers Crossover fanfic. Author's Notes: I have been bitten by the Cross-Over bug. 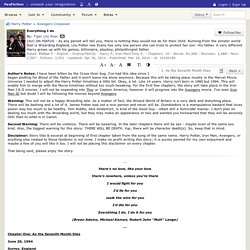