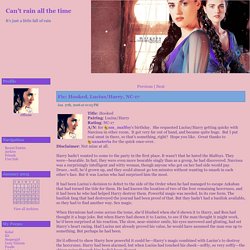 To Test a Man's Character - Minxie - Harry Potter - J. K. Rowling [Archive of Our Own] So Much for No Strings Attached Chapter 25: Heart, Soul and Magic, a harry potter fanfic. 25. 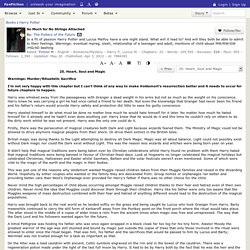 Heart, Soul and Magic Warnings: Murder/Ritualistic Sacrifice I'm not very happy with this chapter but I can't think of any way to make Voldemort's resurrection better and it needs to occur for future chapters to happen. Harry was whisked away from the passageway with Granger a dead weight in his arms but not as much as the weight on his conscience. Harry knew he was carrying a girl he had once called a friend to her death.

Harry steeled himself to do what must be done no matter how much he would hate himself for it later. Firstly, there was the persecution of magical creatures both Dark and Light because wizards feared them. British magic was dying thanks to the Light attempting to destroy all Dark Magic. It didn't help that magical traditions were being taken over by Christian celebrations whilst Harry found no problem with them Harry hated that magical traditions were being banned in favour of Christian feast days. Birthdate Verification Page. Non, Je Ne Regrette Rien Chapter 8: Non, Rien de rien, a harry potter fanfic. Disclaimer: Harry Potter belongs to J.K. 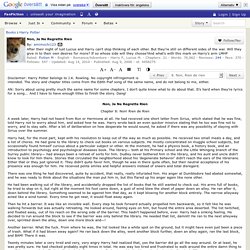 Rowling. No copyright infringement is intended. The story and chapter titles come from the Edith Piaf song of the same name, and do not belong to me, either. AN: Sorry about using pretty much the same name for some chapters. I don't quite know what to do about that. Non, Je Ne Regrette Rien Chapter 8: Non! A week later, Harry had not heard from Ron or Hermione at all. Harry had, for the most part, kept with his resolution to keep out of the way as much as possible. There was one thing he had discovered, quite by accident, that really, really infuriated him. He had been walking out of the library, and accidentally dropped the list of books that he still wanted to check out. 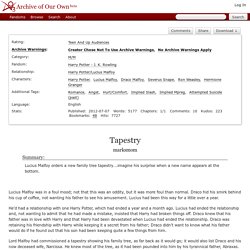 Draco hid his smirk behind his cup of coffee, not wanting his father to see his amusement. Lucius had been this way for a little over a year. He'd had a relationship with one Harry Potter, which had ended a year and a month ago. Lucius had ended the relationship and, not wanting to admit that he had made a mistake, insisted that Harry had broken things off. Draco knew that his father was in love with Harry and that Harry had been devastated when Lucius had ended the relationship. Lord Malfoy had commissioned a tapestry showing his family tree, as far back as it would go; it would also list Draco and his now deceased wife, Narcissa. When Narcissa had been killed, after Voldemort had found that Lucius was a spy, he had wanted to stop living as well; only Draco, Severus and Harry had been able to reach him during that time.

Metamorphose Disclaimer: I do not own Harry Potter, nor do I make any profits from posting this fanfiction. 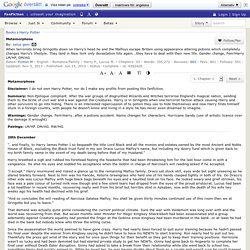 Summary: Non-Epilogue compliant. After the war groups of disgruntled Wizards and Witches terrorise England's magical nation, sending them to the brink of civil war and a war against the Creatures. Harry is in Gringotts when one terrorist faction attack causing Harry and other survivors to go into hiding.

There is an interested repercussion of te potion they use to hide themselves and now Harry finds himself stuck in a foreign country, with people he doesn't know and living in a style he has never even dreamed to imagine. Blonds have more fun Chapter 1: Prologue: Ginny's betrayal, a harry potter fanfic. It had been a year since the end of the war. 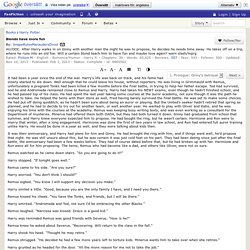 Harry's life was back on track, and his fame had slowly started to die down. Well enough that he could leave his house, without reporters. He was living in Grimmauld with Remus, unfortunately a pregnant Tonks had been killed a few months before the final battle, in trying to help her father escape. Ted had survived, and he and Andromeda remained close to Remus and Harry. Harry had taken his NEWT exams, even though he hadn't finished school, and he had passed top of his class. It was their anniversary, and Harry had plans for him and Ginny. Remus watched as he came down stairs. Managing - Lady_Knight_97 - Harry Potter - J. K. Rowling [Archive of Our Own] Wizards Don't Get Mad, They Get Even - BrianJustin4Ever - Harry Potter [Archive of Our Own] 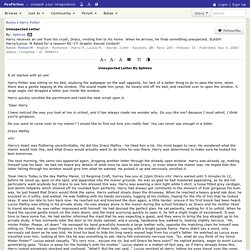 "Why did you pretend to be Draco? " Prophecy Child Chapter 2 Meeting The Fiancé, a harry potter fanfic. Chapter 2 Meeting the Fiancé By the time Severus and Hermione stepped through the floo, Harry had already begun to break down. 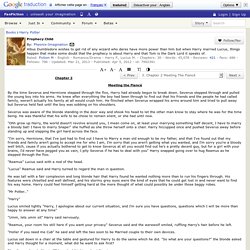 Severus stepped through and pulled the young boy into his arms. He knew after everything the boy had been through to find out that his friends and the people he had called family, weren't actually his family at all would crush him. He flinched when Severus wrapped his arms around him and tried to pull away but Severus held fast until the boy was sobbing on his shoulders. Severus was aware of the blonde standing in the door way and shook his head to let the other man know to stay where he was for the time being.

"Ohh grow up Harry, the world doesn't revolve around you, I mean come on, at least your marrying something half decent, I have to marry a bloody bat! "Reamus" Lucius said with a nod of the head.