Revelations of One Harry James Potter Chapter 1, a harry potter fanfic. Disclaimer: I do not nor ever will own Harry Potter. 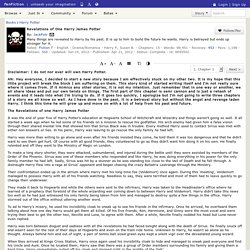 AN: Hey everyone, I decided to start a new story because I am effectively stuck on my other two. It is my hope that this little project will break the block I am suffering on them. This story kind of started writing itself and I'm not really sure where it comes from. If it mimics any other stories, it is not my intention. Just remember that in one way or another, we all share ideas and put our own twists on things. The Revelations of one Harry James Potter It was the end of year five of Harry Potter's education at Hogwarts School of Witchcraft and Wizardry and things weren't going so well. Harry was more than willing to go alone and even after his friends insisted they come, he told them it was too dangerous and that he didn't want to see them get hurt. To make a long story shorter, they were attacked, outnumbered, and injured during the battle until they were assisted by members of the Order of the Phoenix.

The Split, a harry potter fanfic. Disclaimer: I do not own or make any money from Harry Potter. 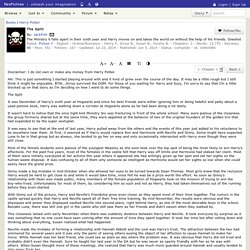 AN: This is just something I started playing around with and it kind of grew over the course of the day. It may be a little rough but I still think it might be enjoyable. BTW...Sirius survived the DOM. For those of you waiting for Harry and Suzy, I'm sorry to say that I'm a little blocked up on that story as I'm deciding on how I want to do some things. The Split It was December of Harry's sixth year at Hogwarts and since his best friends were either ignoring him or being hateful and petty about a used potions book, Harry was walking down a corridor at Hogwarts alone as he had been doing a lot lately. It wasn't hard to notice that the once tight knit Ministry Six was fracturing in front of the whole school.

It was easy to see that at the end of last year, Harry pulled away from the others and the events of this year just added to his reluctance to be anywhere near them. Her memories then took her to their third year. "Well? " "No" The Split, a harry potter fanfic. Triwizard Tales Chapter 6, a harry potter fanfic. A/N: I do not own Harry Potter and would not particularly care to. 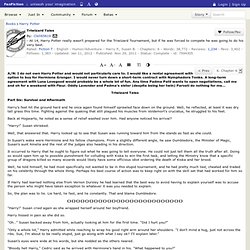 I would like a rental agreement with option to buy for Hermione Granger. I would never turn down a short-term contract with Nymphadora Tonks. A long-term agreement with Luna Lovegood would probably be a whole lot of fun. Any time Padma Patil wants to open negotiations, call me and oh for a weekend with Fleur. Oddly Lavender and Padma's sister (despite being her twin) Parvati do nothing for me… Triwizard Tales Part Six: Survival and Aftermath Harry's feet hit the ground hard and he once again found himself sprawled face down on the ground. Back at Hogwarts, he noted as a sense of relief washed over him. Harry Potter: Junior Inquisitor Chapter 1: The Hearing, a harry potter fanfic. A/N: Hello again. 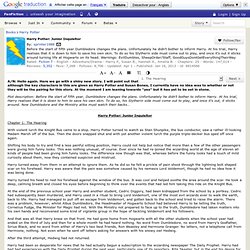 Here we go with a shiny new story. I will point out that although the key characters in this are given as Harry Potter and Susan Bones, I currently have no idea was to whether or not they will be the pairing for this story. At the moment I am leaning towards "yes" but it has yet to be set in stone. Plot description: Before the start of fifth year, Dumbledore changes the plans. Unfortunately he didn't bother to inform Harry. Harry Potter: Junior Inquisitor Chapter 1: The Hearing With violent lurch the Knight Bus came to a stop. Shifting his body to try and find a less painful sitting position, Harry could not help but notice that more than a few of the other passengers were giving him funny looks. 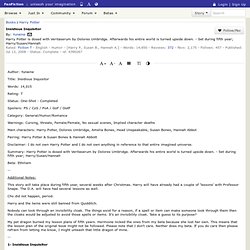 Thank You Ms Bones Chapter 8: Welshpool, a harry potter fanfic. Chapter Eight - Welshpool Rufus Scrimgeour was both surprised and annoyed to see Narcissa walk into the receptionist office the next morning and announce that she had an appointment. 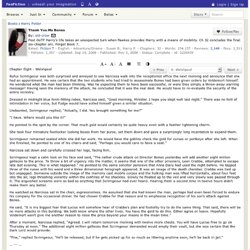 He was certain that the two students who had tried to assassinate Bones had been given orders by Voldemort himself. He wondered what the man had been thinking. Was he expecting them to have been successful, or were they simply a throw-away warning message? Having seen the memory of the attack, he concluded that it was the real deal. Dressed in midnight blue form-fitting robes, Narcissa said, "Good morning, Minister. Undaunted, Scrimgeour replied, "Actually, I did. "I have. He pointed to the spot by the corner.

She took four miniature footlocker looking boxes from her purse, set them down and gave a surprisingly long incantation to expand them. Scrimgeour remained seated while she did her work. Narcissa sat down and carefully crossed her legs, facing him. After a moment, Narcissa replied, "Agreed. "Huh? "