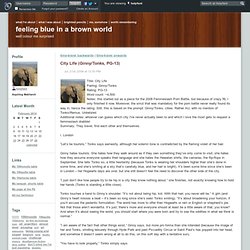 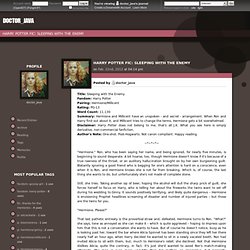 When Ron and Harry find out about it, and Millicent tries to change the terms, Hermione gets a bit overwhelmed.Disclaimer:Harry Potter does not belong to me, that's all J.K. What you see here is simply derivative, non-commercial fanfiction.Author's Note: One-shot. Post-Hogwarts. Not canon compliant. Happy reading. "Hermione. " Still, she tries. Absolute Gravity Chapter 6 End, a harry potter fanfic. Title: Absolute Gravity Author: Janine Fandom: Harry Potter Pairing: Hermione/Pansy Rating: NC-17 Disclaimer: I don't own them Summary: Hermione and Pansy's relationship continues to grow. 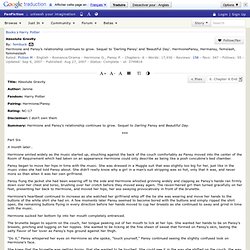 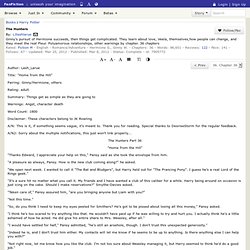 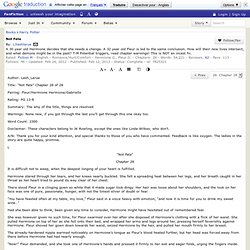 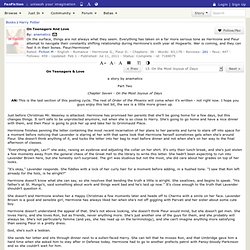 The rest of Order of the Phoenix will come when it's written - not right now. Just before Christmas Mr. Hermione finishes penning the letter containing the most recent incarnation of her plans to her parents and turns to stare off into space for a moment before noticing that Lavender is staring at her with that same look that Hermione herself sometimes gets when she's around Fleur. "Everything alright, Lav? " "It's okay," Lavender responds. Hermione doesn't know what she can say, so she resolves that bending the truth a little is alright. On Teenagers And Love Chapter 12: On Veela, a harry potter fanfic. On Teenagers & Love a story by anamatics Part Two. 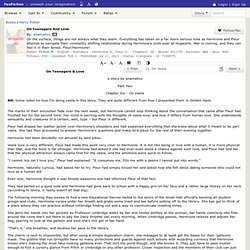 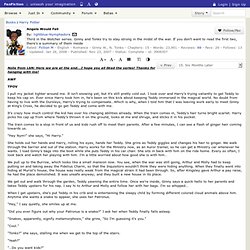 Thanks for hanging with me! I pull my jacket tighter around me. It isn't snowing yet, but it's still pretty cold out. I look over and Harry's trying valiantly to get Teddy to keep his cap on. Ever since Harry took him in, he's been on this kick about keeping Teddy immersed in the magical world. It's crazy how much control the kid has over his changing abilities already. The train comes to a stop in front of us and kids rush off to meet their parents. "Hey Nym! " Astronomy Tower - Freckles (Story Text) Title: Freckles (Story Text) Author Name: November Snowflake Owl the author: here. 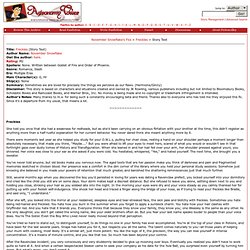 Rating: PG Spoilers: None. Written between Goblet of Fire and Order of Phoenix. Genre: Romance, Slash Era: Multiple Eras Main Character(s): G, Hr Ship(s): None Summary: Sometimes we are loved for precisely the things we perceive as our flaws. (Hermione/Ginny) Disclaimer: This story is based on characters and situations created and owned by JK Rowling, various publishers including but not limited to Bloomsbury Books, Scholastic Books and Raincoast Books, and Warner Bros., Inc. Bound With Silver Threads Chapter 51: A Good Five Years, a harry potter fanfic. Author's Note: Merlin damn this one was hard to write! 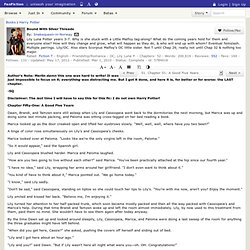 It was just impossible to focus on it; everything was distracting me. But I got it done, and here it is, for better or for worse: the LAST chapter. Disclaimer: The last time I will have to say this for this fic: I do not own Harry Potter! Chapter Fifty-One: A Good Five Years Dawn, Brandi, and Tamzen were still asleep when Lily and Cassiopeia went back to the dormitories the next morning, but Marica was up and doing some last minute packing, and Paloma was sitting cross-legged on her bed reading a book. Marica looked up as the door creaked open and lifted her eyebrows slowly. Breaking Boundaries Chapter 13: Happy Days & Better Evenings, a harry potter fanfic.

Breaking BoundariesBy: Somewhere Sky Disclaimer: Of course, as always - the rights to the Harry Potter realm of fiction belongs solely to J.K Rowling and her brilliant mind. Although I may admit, I shall always be slightly jealous. Chapter 13:Happy Days and Better Evenings The sweet smell of honey drifted through the trees, with the wind both present and soothing as it drove in waves past a variety of spring colours. The flowers flowed with the wind, almost sparkling. It had taken time and it had taken many trials and troubles but the two girls had made it.

Golden Haze Chapter 39: Finale, a harry potter fanfic. Golden Haze, Finale AN: Finally this is done! I love you all so much, you who have stuck with this story through the ups and downs of my life and my writing insanity. I think that you all are amazing and thank you so much for reading this story and enjoying it as much as I have enjoyed writing it. A series of letters from the academic year 1999-2000: August 20, 1999 Dear Harry (& Ron who I'm sure will read this letter) Cairo is an amazing city! I'm sorry that I have not written sooner.

LP- 11 years The twins had never fully gotten over the kidnapping, Tonks knew. They got nervous in large crowds, so they made sure to walk between her and Ginny as they made their way to Platform 9 ¾. Tonks would be worried, but she could tell that they were calming down. "Hey there Ginny, Tonks," Ron smiled. "Hi! " Masquerade Chapter 23, a harry potter fanfic. The times are the masquerade of the eternities~Ralph Waldo Emerson Epilogue And so it came to be that the foolish became wise. Still the dark depths of your heart are a mystery but you have learned so much more about yourself.

The Past Echoing Through Our Bloodstreams - Woldy - Harry Potter - Rowling. The Promises Beyond The Thunderstorm Chapter 25: The Final End, a harry potter fanfic. All's well that ends wellproverb derived from the play by William Shakespeare 3 years later Hermione has passed her Charms, Potions, Herbology, Transfiguration and Defence against the Dark Arts N.E.W.T's with an Outstanding in all of them and had started her training as a Healer the summer after she graduated from Hogwarts. Her first two years she had been trained and placed at St Mungo's Hospital for Magical Maladies and Injuries but now that her third year of training had started she was placed at Hogwarts, under the watchful eye of Poppy Pomfrey.

The day she married Bellatrix Black had been the most beautiful day of her life. They wed in a small church in the middle of nowhere in the south of England, surrounded by hills behind which the sun set as they enjoyed an open air feast with their guests. "I did not expect you home until tomorrow," Bellatrix said when she saw Hermione appear in the fireplace. The Scandalous Tale of the Diagon Nursery Calendar - Woldy - Harry Potter - Rowling. Timeless Longing Chapter 11: Path Of Time, a harry potter fanfic. She arrived back at the Manor with tears still streaming down her face. Instead of running into the house, she ran into the gardens that lay behind it and sat down by the fountain. She caught sight of her reflection in the water and smashed her hand into the water. Her reflection rippled and for a second or two completely faded.

"Hermione, aren't you supposed to be at... " Bellatrix's voice trailed off when she realised Hermione was crying. Hermione swallowed hard. From the open patio doors Narcissa emerged and she too walked towards Hermione. "Harry accused me of being responsible for Ron's death because I married someone from the past" Hermione whispered and briskly brushed the tears from her cheek. Trial and Error Chapter 26: Epilogue 1, a harry potter fanfic. Disclaimer: anything you recognise from the books belongs to J. K.