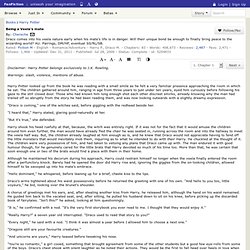 Rowling. Warnings: slash, violence, mentions of abuse. Harry Potter looked up from the book he was reading with a small smile as he felt a very familiar presence approaching the room in which he sat. The children gathered around him, ranging in age from three years to just under ten years, eyed him curiously before following his gaze to the still closed door. Those who had known him long enough shot each other discreet smirks, already knowing why the man had trailed off so abruptly from the story he had been reading them, and was now looking outwards with a slightly dreamy expression. "Draco is coming," one of the witches said, before giggling with the redhead beside her. "I heard that," Harry stated, glaring good-naturedly at her. "But it's true," she defended. Harry shook his head ruefully at that, because, the witch was entirely right. "Hello dominant," he whispered, before leaning up for a brief, chaste kiss to the lips. 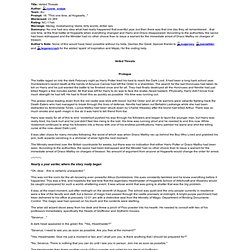 "This one time, at Hogwarts... " Wordcount: 22,369 Rating: NC-17ish Warnings: Mpreg, misbehaving Veela, dirty words, dirtier sex. Summary: No one had any idea what had really happened that eventful year, but then there was that one day they all remembered…that one time, at the final battle at Hogwarts when everything changed and Harry and Draco disappeared. According to the authorities, the savior had been kidnapped and the Minister had no other choice than to issue a warrant for the immediate arrest of Draco Malfoy on charges of treason. Author's Note: None of this would have been possible without my beta, Gavilan the Great. Veiled Threats Prologue The battle raged on into the dark February night as Harry Potter tried his best to reach the Dark Lord. Harry was ready for all of this to end. The Ministry searched over the British countryside for weeks, but there was no indication that either Harry Potter or Draco Malfoy had been seen. 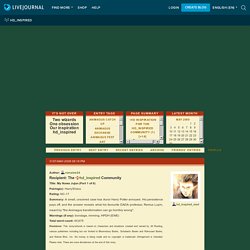 Inc. Author's notes (if any): I hope you, the hd_inspired community, enjoy this gift. Absynthedrinkeryour support, comments, and corrections were so appreciated. Alaana_fair, thanks for the sanity check. My Nawa Jujun Part 1 of 6 March 2003 The midnight air cracked at the same moment Harry peeked around the corner of the Three Broomsticks. "A raccoon? " "And? " "No. " Draco and Harry Fan Fiction Archive. EMMAGRANT01! Author: megyalRecipient: emmagrant01Title: I Await A ProtectorPairing(s): Harry/Draco Summary: A snarky Patronus and its even more snarky master insist on disturbing Harry's peace of mind.Rating: Mature/NC-17Disclaimer: All Harry Potter characters herein are the property of J.K. 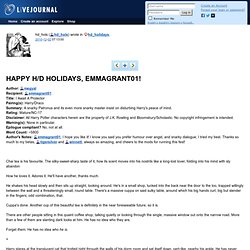 Rowling and Bloomsbury/Scholastic. No copyright infringement is intended.Warning(s): None in particular.Epilogue compliant? No, not at all.Word Count: ~5800Author's Notes: emmagrant01, I hope you like it! Tigersilver and winnett, always so amazing, and cheers to the mods for running this fest! Chai tea is his favourite. How he loves it. He shakes his head slowly and then sits up straight, looking around. Cuppa's done. There are other people sitting in this quaint coffee shop, talking quietly or looking through the single, massive window out onto the narrow road.

Forget them. Harry stares at the translucent cat that trotted right through the walls of his dorm room and sat itself down, pert-like, nearby his ankle.