Blindness Ch 1, Harry Potter. Author's Note: This story came about in the two week time period after my initial LASIK surgery went poorly and I could not focus enough to see details either near or far away, but mostly blurry colors and shapes. 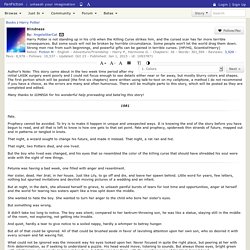 The first portion which will be posted (the first six chapters) were written using talk-to-text on my cellphone, a method I do not recommend if you have a choice, as the errors are many and often humorous. There will be multiple parts to this story, which will be posted as they are completed and edited. Many thanks to GJMEGA for his wonderful help prereading and beta'ing this story! Fate. Prophecy cannot be avoided. That night, a wizard sought to change his future, and made it instead. That night, two Potters died, and one lived. But the boy who lived was changed, and his eyes that so resembled the color of the killing curse that should have shredded his soul were wide with the sight of new things. Petunia was having a bad week, one filled with anger and resentment. Why? Fanfic: Brighter Morning Ch 1, Harry Potter. Chapter 1 - One Morning in Little Whinging Harry Potter awoke with a start, out of breath, and with his heart pounding furiously. 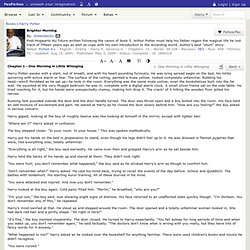 He was lying spread eagle on the bed, his limbs quivering with active alarm or fear. The surface of the ceiling, painted a mute yellow, looked completely unfamiliar. Rubbing his head—which throbbed as he sat up—he took in the room. Fade to Grey Ch 1, Harry Potter. Fade to Grey by marianne le fey A/N - Just a few notes about canon before we begin. 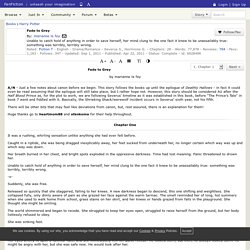 This story follows the books up until the epilogue of Deathly Hallows - in fact it could even be read assuming that the epilogue will still take place, but I rather hope not. However, this story should be considered AU after the Half Blood Prince as, for the plot to work, we are following Severus' timeline as it was established in this book, before "The Prince's Tale" in book 7 went and fiddled with it. Fanfic: Ghosts in the Attic Ch 1, Harry Potter. Disclaimer: I own nothing associated with Harry Potter. 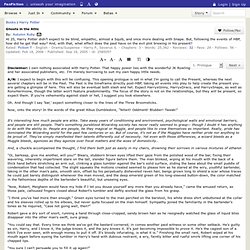 That happy power lies with the wonderful JK Rowling and her associated publishers, etc. I'm merely borrowing to suit my own happy little needs. A/N: I expect to begin with this will be confusing. This opening prologue is set in what I'm going to call the Present, whereas the next several chapters will be in the Past. The Past is the timeframe directly post-HBP, taking all events into play to help create the present you are getting a glimpse of here. Kidnapped Ch 1, Harry Potter. Harry Potter—Kidnapped Chapter One Taken By Surprise A/N-this takes place right after Harry Potter and the Order of the Phoenix, but in the summer that would take place in the 6th book. 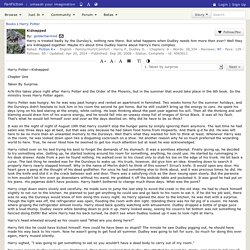 So the ministry loves Harry Potter again. Harry Potter was hungry. It was on the night of night of August 10th that Harry couldn't stop the hunger pains by simply ignoring them anymore. Harry rolled over on his bed trying his best to forget the demands of his stomach. Harry crept down stairs slowly and carefully. Harry's head wheeled around as his cousin said "What are you doing here? " Harry felt like he could have kicked himself. Harry sighed, "I was going to get something to eat so you wouldn't have a dead body to carry out of my room. " For some reason Dudley looked very frightened. "Wow 'Big D,' I had no idea your mind worked in the ways of gore," Harry said with a laugh. 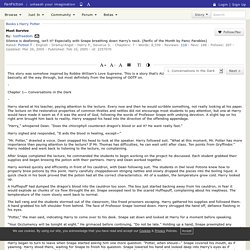 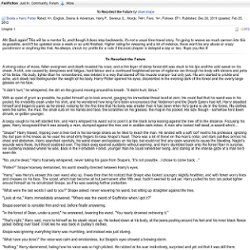 This will be a mentor fic, and though it does step backwards, it's not a usual time-travel story. I'm going to weave as much cannon into this as possible, and it'll be updated once a week or so until finished. Higher rating for swearing and a bit of violence, there won't be any abuse or crazy punishment or anything like that. As always, check my profile for a note if the next chapter is delayed a day or two. Hope you like it! To Recollect the Future A strong odour of moss, fallen evergreen and death invaded his nose; and a thin layer of damp forest dirt was stuck to his lips and the cold sweat on his cheek. "It didn't hurt," he whispered, the dirt on the ground moving around his breath.

With as quiet of grunt as possible, he pulled himself up to look around, gauging his immediate threat level at zero. A raspy cough to his left startled him, and Harry whipped his wand out to point it at the black lump leaning against the tree off in the distance. "Snape! " "Potter? " "What? Fanfic: Yet Another Snape meets the Dursleys story Ch 1, Harry Potter. Yet Another Snape Meets the Dursleys Story: by rabbit Disclaimer: Harry Potter and all his …er… acquaintances are the creation of JK Rowling, who is a genius and owns them all. 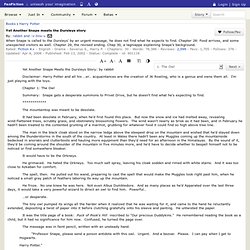 I'm just playing with the toys. Chapter 1: The Owl Summary: Snape gets a desperate summons to Privet Drive, but he doesn't find what he's expecting to find. The mountaintop was meant to be desolate. It had been desolate in February, when he'd first found this place.