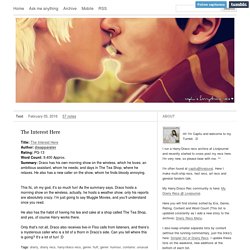 I love your blog by the way <3 Hello! :D So happy you enjoy the recs! I hope you’ve found stories to love. I might have gone a bit overboard. Harry Potter is a Dirty Exhibitionist by @eidheann (NC-17, 13,1K)Summary: The ten times they almost got caught and one time they did. You First, Loser by zeitgeistic. Up in the Air by dictacontrion (PG-13, 8.5K)Summary: When he’s out in the sun, eye to eye with the treeline, Harry can barely remember why this thing with Draco was ever a secret in the first place.Absolutely lovely. And I Know the Spark by @firethesound (NC-17, 15,6K)Summary: All Draco cares about is keeping Potter alive, and he’ll do whatever it takes to make sure that happens.Wartime! 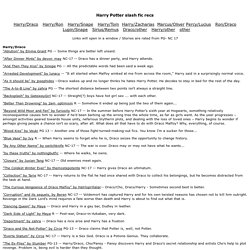 "After Dinner Mints" by devon_may NC-17 -- Draco has a dinner party, and Harry attends. "And Then They Kiss" by Sinope PG -- All the predictable words had been said a week ago. "Arrested Development" by lunacy -- "It all started when Malfoy winked at me from across the room," Harry said in a surprisingly normal voice. "As it should be" by josephides --Draco wakes up and no longer thinks he hates Harry Potter.

He decides to stay in bed for the rest of the day. Jan's list of Harry Potter Fanfiction - Little Ones Fics. Harry Potter belongs to J.K. 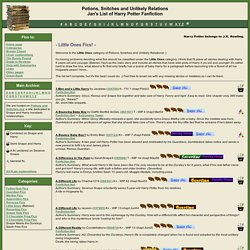 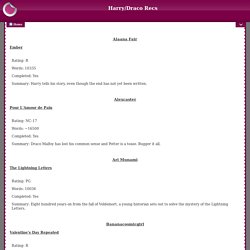 Draco wants only the best in magical snakes for his son, and that means turning to serpent-breeder Harry Potter. Harry, who thought he had settled his grudges with Malfoy long ago, is startled by the way he responds. COMPLETE. Endurance of Life. Harry Potter Fic Recs - swedishbitch. These are all Harry/Draco fic recs. 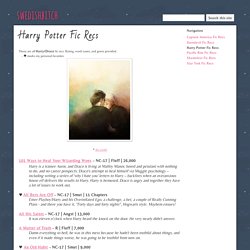 Rating, word count, and genre provided. - ♥ marks my personal favorites Harry is a trainee Auror, and Draco is living at Malfoy Manor, bored and petulant with nothing to do, and no career prospects. HPDM Fanfiction - Ahyan's Reading Nook. Purple Passage: H/D fanfiction recs. H/D fanfiction recommendations by Purplie Some of my favorite Harry/Draco fics. 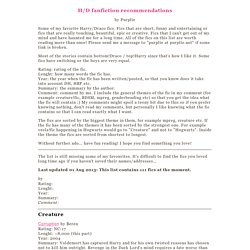 Fics that are short, funny and entertaining or fics that are really touching, beautiful, epic or creative. Fics that I can't get out of my mind and have haunted me for a long time. All of the fics on this list are worth reading more than once! Most of the stories contain bottom! Rating: rating of the fic. The fics are sorted by the biggest theme in them, for example mpreg, creature etc.

Without further ado... have fun reading! The list is still missing some of my favourites. Harry Potter / Draco Malfoy fic recs - shouting at windmills. I've been sitting on this post for a while now, but somehow the list was never complete. 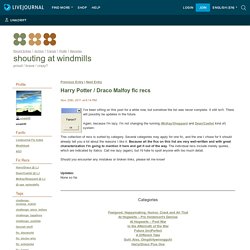 It still isn't. There will possibly be updates in the future. Again, because I'm lazy, I'm not changing the running (McKay/Sheppard and Dean/Castiel kind of) system: This collection of recs is sorted by category. Several categories may apply for one fic, and the one I chose for it should already tell you a lot about the reasons I like it. Should you encounter any mistakes or broken links, please let me know! Updates: None so far. Feelgood, Happymaking, Humor, Crack and All That(Just for the sake of it.) 101 Ways To Heal Your Wizarding Woes by who_la_hoopRated NC-17, 26.5k words.

Trust mother dearest to buy him such a useless piece of twaddle, but if it stopped her fussing it was worth it, he supposed. A Consummation Devoutly To Be Wished by mirabellaRated NC-17, 7.8k words. Draco Malfoy was having a very, very, very bad day. A Tale of Two Tents by who_la_hoopRated PG-13, 10.3k words. "Auntie Cissy! " H/D Oldies Recs List - Part 1 of 2 - gossymer. After over 4 years of reading H/D fics, I've finally compiled all my bookmarks into a rec list of more than 280 fics ^__^ They cover everything from classics to newbie fics, from drabbles to epic chapter fics. 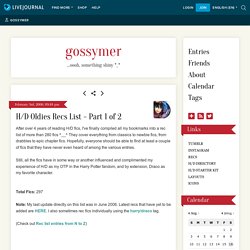 Hopefully, everyone should be able to find at least a couple of fics that they have never even heard of among the various entries. Still, all the fics have in some way or another influenced and complimented my experience of H/D as my OTP in the Harry Potter fandom, and by extension, Draco as my favorite character. Total Fics: 297 Note: My last update directly on this list was in June 2006. Latest recs that have yet to be added are HERE. 8th Year Harry/Draco Fanfiction: karala. This is list of fanfiction that starts up after Deathly Hallows and has Harry and Draco returning to Hogwarts to complete their schooling. 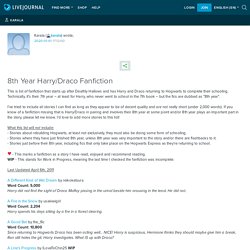 Technically, it's their 7th year – at least for Harry, who never went to school in the 7th book – but the fics are dubbed as "8th year". I've tried to include all stories I can find as long as they appear to be of decent quality and are not really short (under 2,000 words). If you know of a fanfiction missing that is Harry/Draco in pairing and involves their 8th year at some point and/or 8th year plays an important part in the story, please let me know. Recs. HP recs: Harry/Draco long fics. Posted on October 1, 2007Filed Under HP recs masterlist, HP recs | A fair warning: I’ve been out of HP fandom for quite a while by now. 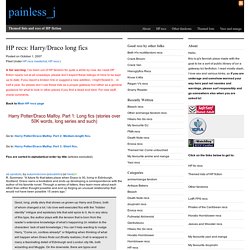 As I read HP fiction nearly not at all nowadays, please don’t expect these listings of mine to be kept up to date. If you report a broken link or suggest a new addition, I might fix/add it… in half a year. So please don’t use these lists as a proper gateway but rather as a general guidance for what to look in other places if you find a dead end here. For new stuff, check comments. Draco/Harry: Hogwarts AU and 8th Year Fic Recs - gracerene.

This is a post with all of my Draco/Harry recs where the boys are still in school. I have sorted it between: -Hogwarts AU: the fic goes AU sometime during their school years and is not DH compliant -Post-War: takes place immediately after the main part of DH ends and does not go past that summer -8th Year: mostly DH compliant and the boys went back for another year of school after the war In the Notes section of each entry I have different tags, so if you are looking for something specific (like "bonding! Fic" for example) just ctrl+f and enter your tag and it should highlight the relevant entries! ♥ = favorite updated February 1, 2016 Hogwarts. Whats not the matter with harry potter? Fic Recs: Harry/Draco, Part 1 - inkstained. Ain't No Friend of Mine by letteredHarry/Draco. Draco’s turned into a dog by a not-Dementor (you’ll see what I mean) and after much drama Harry adopts him.

A brilliant story ensues. One of the most insightful character studies of both Draco and Harry, and quite funny and sweet to boot! Welcome, let's go on an adventure together! — Drarry Masterlist. Fic recs from DracoTops-Harry 2015 - snowgall. The dracotops_harry fest has just ended, and this year I made an effort to read every fic posted! There were several standouts; here are my recs for the best fics of the fest: Make Me a Headline (I Want To Be That Bold) by dicta_contrion, NC-17, 31,000 wordsSummary: Draco never expected to see Harry doing that again. Especially with someone else, in a grainy photograph that's landed on his desk one Monday morning. Draco & Harry Recs. Um so this is not about Drarry but in 2 days I will have taken one of the most important tests in my life and if I ace this I will get into the school I so desperatly want (and not have to work for at a job i hate) and i miss reading drarry so much I can’t remember when was the last time tbh AH I just want this all to end (and to pass of course) Anonymous asked: I don't know if you're still running this blog, but I just wanted to give you a hug and my heartfelt thanks for recc-ing (is that even a word?)

So many great stories. Anyway, I've been sick and kind of bored. Do you know of any feel-good, plotty stories? First of all, thank you so much. Get better!!