The Power of an Angry Witch, a harry potter fanfic. Disclaimer: I do not own anything related to Harry Potter. 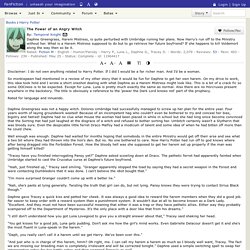 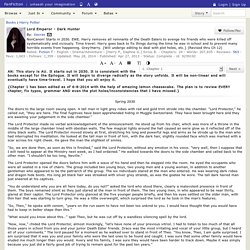 It starts out in 2030. It is consistent with the books except for the Epilogue. It will begin to diverge radically as the story unfolds. It will be non-linear and will eventually have time-travel. I hope that you all enjoy it. {Chapter 1 has been edited as of 6-8-2014 with the help of amazing lemon cheesecake. Spring 2030 The doors to the large room swung open. The Lord Protector made no verbal acknowledgement of the announcement. "So, we are done then, as soon as this is finished," said the Lord Protector, without any emotion in his voice. The Lord Protector opened the doors before him with a wave of his hand and then he stepped into the room. "You do understand why you are all here today, do you not? " "So, Theo," he spoke with venom, "years on the run seem to have not been too unkind to you. "What would you know about this…" spat Theo, but he was cut off by a wandless silencing spell by the lord.

The Lord Protector laughed. He waited as his words sunk in. The Soul Within Chapter 1, a harry potter fanfic. AN: There were a few major problems I had with the plot in canon. 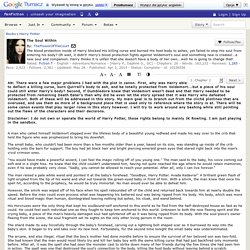 First, why was Harry able to deflect a killing curse, burn Quirrell's body to ash, and be totally protected from Voldemort...but a piece of his soul could still enter Harry's body? Second, if Dumbledore knew that Voldemort wasn't dead and that Harry needed to be protected from remaining Death Eater's then why did he even let the story spread that it was Harry who defeated Voldemort. Both of these will be addressed in this story. My main goal is to branch out from the cliché plotlines that are overused, and use them as more of a background piece that is used only to reference where the story is at. There will be some canon events that play larger roles in this story however. Disclaimer: I do not own or operate the world of Harry Potter, those rights belong to mainly JK Rowling. Harry Potter - Three to Backstep Chapter 1: Backstepped, a harry potter fanfic. Disclaimer: The Harry Potter universe belongs to the proverbial Duchess of Magic, JK Rowling, Scholastic, Bloomsbury, Warner Bros and some other high falutin' companies. 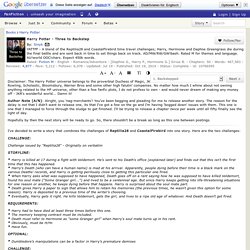 No matter how much I whine about not owning anything related to the HP universe, other than a few fanfic plots, I do not profess to own - and would never dream of making any money off - JKR's wonderful world... Damn it! Author Note (A/N): Alright, you 'nag-merchants'! You've been begging and pleading for me to release another story. The reason for the delay is not that I didn't want to release one, its that I've got a few on the go and I'm having 'bogged down' issues with them.

Hopefully by then the next story will be ready to go. Angry Harry and the Seven Chapter 1: The Incident, a harry potter fanfic. Disclaimer: The Harry Potter universe belongs to JK Rowling, Scholastic, Bloomsbury, Warner Bros and some other high falutin' companies. 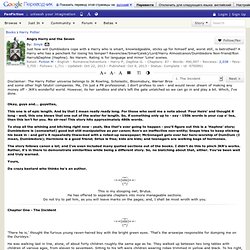 Me, I'm just a PR professional. I don't profess to own - and would never dream of making any money off - JKR's wonderful world. However, its her sandbox and she's left the gate unlatched so we can go in and play a bit. Which, I've done. Okay, guys and... guyettes, This one is of epic length. To stop all the whining and bitching right now - yeah, like that's ever going to happen - you'll figure out this is a 'Haphne' story; Dumbledore is (somewhat) good but still manipulative as per canon; Ron's an ineffective non-entity; Snape tries to keep sticking his beak in - and get's it repeatedly thwacked with a rolled-up newspaper; McGonagall gets over her hero-worship of DumDum (I mean, Dumbledore); Hermione is a good friend; Sirius is free; kids are kids; and teenagers are walking bags of hormones. Yours, A Life Changing Halloween Chapter 1, a harry potter fanfic.

A Memorable Halloween Disclaimer: Any character, physical place, or magic you recognize from Harry Potter books or movies belong to Joanne "Jo" Rowling and/or anyone she has granted a license too. 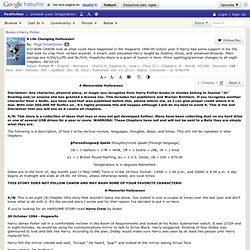 This includes her publishers and Warner Brothers. If you recognize another character from a fanfic, you have read that was published before this, please inform me, so I can give proper credit where it is due. With over 560,000 HP fanfics on , it's highly probable this will happen although I will do my best to avoid it. This is the last Disclaimer that you will see as it covers all chapters. Beltane Child Chapter 1: Magic of Beltane. Hi, this is my newest story. 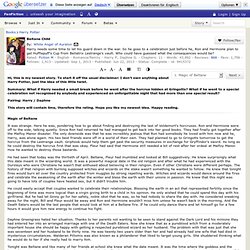 To start it off the usual disclaimer: I don't own anything about Harry Potter, just the idea of this little twist. Summary: What if Harry needed a small break before he went after the horcrux hidden at Gringotts? What if he went to a special celebration not recognised by anybody and experienced an unforgettable night that had more than one special result? Pairing: Harry / Daphne This story will contain lime, therefore the rating. Magic of Beltane It was strange. Harry Potter and the Siren's Song Chapter 9. Daphne blinked awake slowly, her brain struggling to comprehend the loud voices that were flooding her bedroom. 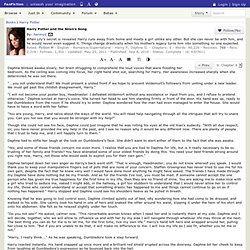 As the ceiling was coming into focus, her right hand shot out, searching for Harry. Her awareness increased sharply when she determined he was not there. The Pureblood Princess Chapter 1, a harry potter fanfic. Disclaimer: I own nothing and am making no profit. 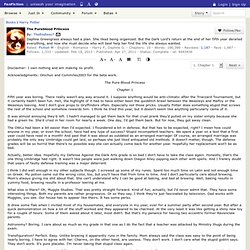 Acknowledgments: Onichun and Commiles2003 for the beta work. The Pure-Blood Princess Chapter 1 Fifth year was boring. Harry Potter Heir of PenDragon Chapter 1, a harry potter fanfic. Disclaimer: I do not own Harry Potter, I am just playing around in the world created by the talented J.K Rowling (Who in my opinion fucked up with the final pairings) A/N: This is an idea that has swum around in my head for a while. 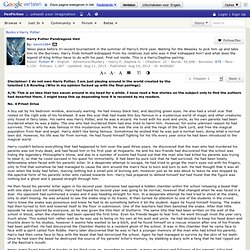 I have read a few stories on the subject only to find the authors had deserted them. I might keep this up depending how it is received by my readers. No. 4 Privet Drive A boy sat by his bedroom window, anxiously waiting. Harry couldn't believe everything that had happened to him over the past three years. He then faced his parents' killer again in his second year. Harry again found himself in trouble in his third year, as, according to reports, a mass murderer and follower of his parents' killer had escaped from the wizard prison Azkaban. Harry sat in his room, waiting. Harry picked up his trunk and began to drag it out of his room. "Who the bloody hell would knock at this time of night?