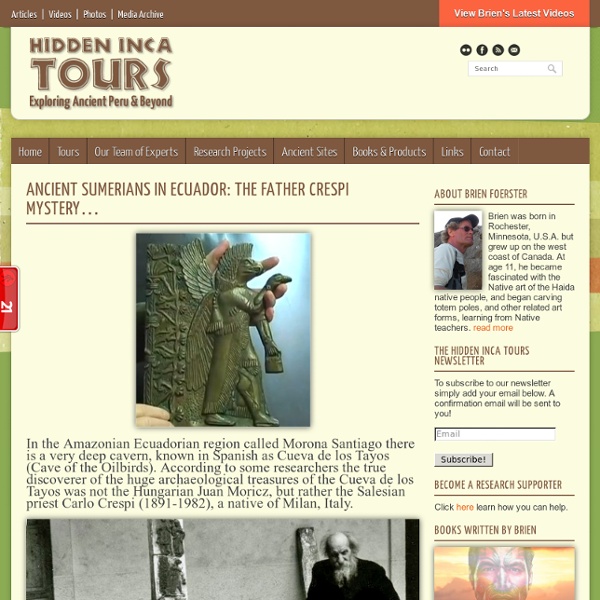 In the Amazonian Ecuadorian region called Morona Santiago there is a very deep cavern, known in Spanish as Cueva de los Tayos (Cave of the Oilbirds). According to some researchers the true discoverer of the huge archaeological treasures of the Cueva de los Tayos was not the Hungarian Juan Moricz, but rather the Salesian priest Carlo Crespi (1891-1982), a native of Milan, Italy. Carlo Crespi, who arrived to the Amazonian Ecuador area of Cuenca in 1927, was able to win the trust of the natives Jibaro, and so they did deliver to him, over decades, hundreds of fabulous archaeological pieces dating back to an unknown time, many of them made of gold or golden, often masterfully carved with archaic hieroglyphs that, to date, no one has been able to decipher. From 1960 Crespi obtained from the Vatican the permission to open a museum in the city of Cuenca, where was located his Salesian mission. In 1962 there was a fire, and some pieces were lost forever. Full details Here Full details Here

VrayWorld - Scripts & Plugins for 3d environment creation We categorized all those tools for easier research and study according to the usage they have in the creation of our environment. So we have four different categories. Terrain - Vegetation - Rocks & Pavements - Scattering. Maas Architects Bellinkhofartwork by: Nijland George Terrain creation. Populate Terrain: Optimized terrain generation from contour lines. The Wicker Man (1973 Edit Storyline Sgt. Howie travels to Summerisle to investigate the disappearance of a young girl. Gangotri - Explore Outing - An app Travel with You One of the four sites in Chota Char Dham, Gangotri, the origin of the River Ganges and seat of the goddess Ganga, is a town and a Nagar Panchayat (municipality) in Uttarkashi district in the state of Uttarakhand. Elevated at 3753 metres (12,313 ft) on the Greater Himalayan Range and situated on the Banks of the river Bhagirathi, it is 105 km from Uttarkashi. Devotees from all parts of India seeking redemption, and forgiveness of sins make this pilgrimage at least once in his lifetime. It obtains the name Ganga from Devprayag onwards, where it meets the Alaknanda River.

Doctoral degrees: The disposable academic ON THE evening before All Saints' Day in 1517, Martin Luther nailed 95 theses to the door of a church in Wittenberg. In those days a thesis was simply a position one wanted to argue. Luther, an Augustinian friar, asserted that Christians could not buy their way to heaven. HomeschoolScientist Upload TheHomeschoolScientist.com Subscription preferences

Haridwar Travel and Tourism Guide, Places to See and Nearby Attraction Tourism in Haridwar Amongst the many spiritual places in India, the one which revolves around the holy Ganges River is Haridwar. It is believed that one attains a state of unison with the almighty after visiting this pilgrimage and taking dip in Ganga. The entry point for other spiritual destinations namely Rishikesh, Kedarnath and Badrinath is the holy city of Haridwar or the gateway to God.

drawstuffrealeasy Upload ShooRaynerDrawing Channel Subscription preferences Loading... Kedarnath - Explore Outing - An app Travel with You One of the chota char dham, Kedarnath is dedicated to Lord Shiva. There are twelve main jyotirlings of Lord Shiva or Kedar in India, and one of their abodes is Kedarnath which is the most remote site of the chota char Dham Yatra. Situated at an altitude of 3,584 metres above sea level near Chorabari glacier, this centre of pilgrimage was established by Adi Guru Shankaracharya in 9th century. The present structure of Kedarnath temple is believed to be more than 1,000-year-old. Close to the Indo-China border, the temple is located in Rudraprayag district of Uttarakhand. River Mandakini originates from the Kedarnath Mountains.

The Dark Side of the Moon (Landing) Some dispute that the U.S. sent a man to the moon. Astronaut Buzz Aldrin is the second man to walk on the moon’s surface in 1969 By Judy Berman Over eight days during July 1969, all eyes were on Apollo 11, when it became the first manned mission to land on the moon. Old School Television Upload Subscription preferences Loading... Working... Old School Television Badrinath - Explore Outing - An app Travel with You The mystic land of Uttarakhand is not just known for its scintillatingviews, snowcapped mountains and majestic locations for some fun and frolic, but also known as the land of Gods, which attracts lakhs of devotees every year from India to take blessings from its countless holy sites, one of which is Badrinath. Situated between the mountains of Nar and Narayana mountain ranges 9 km east of Nilkantha peak, on the banks of the Alaknanda River, Badrinath is one of the most sacred town of the Hindus. Elevated at 3100 metres, Badrinath is one of the holy shrines of chota char dham. According to Hindu Mythology, it's important to visit this abode in Himalayas at least once in lifetime to attain salvation and getting rid of all the sins. That's the reason, even foreign tourists flock in large numbers now to feel blessed, peaceful and spiritually connected to the Universe. Badrinath which is located in Garhwal hills, was constructed approximately two centuries ago by Garhwal Kings.

solar 32k 3d 3ds This detailed 3d model comes equipped with two superposed textures, one by day and other one by night with his respective lights. Easy to use, only it needs to move the solar light towards where it is wished and automatic in the shaded part there were activated the lights of the night cities. · Ultra high definition textures.· Ready to render.· Scene lights add.· POLY COUNT can be edited.· Land day/night textures· Atmosphere materials.· Standard Lighting settings (Deflaut render, Cloud Shadow map.)· 32k Textures (32000 x 16000)· Dynamic day/night shader.· High quality fast render.· The number of polygons can be reduced with turbosmooth settings. The scene contains: -4 Spheres·Earth Layer (Day Surface Map, Night Surface texture.)

Physics Community Afire With Rumors of Higgs Boson Discovery | Wired Science One of the biggest debuts in the science world could happen in a matter of weeks: The Higgs boson may finally, really have been discovered. Ever since tantalizing hints of the Higgs turned up in December at the Large Hadron Collider, scientists there have been busily analyzing the results of their energetic particle collisions to further refine their search. “The bottom line though is now clear: There’s something there which looks like a Higgs is supposed to look,” wrote mathematician Peter Woit on his blog, Not Even Wrong. According to Woit, there are rumors of new data that would be the most compelling evidence yet for the long-sought Higgs. The possible news has a number of physics bloggers speculating that LHC scientists will announce the discovery of the Higgs during the International Conference on High Energy Physics, which takes place in Melbourne, Australia, July 4 to 11.