Labour Departments report on Grayston bridge due next week:Friday 16 October 2015. Two people died and over 20 were injured, three of them critically, after the bridge collapsed. 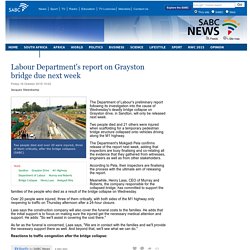 (SABC) The Department of Labour's preliminary report following its investigation into the cause of Wednesday's deadly bridge collapse on Grayston drive, in Sandton, will only be released next week. Two people died and 21 others were injured when scaffolding for a temporary pedestrian bridge structure collapsed onto vehicles driving along the M1 highway. The Department's Mokgadi Pela confirms release of the report next week, adding that inspectors are busy finalising and co-relating all the evidence that they gathered from witnesses, engineers as well as from other stakeholders.

Zuma sends condolences after Joburg bridge accident:Thursday 15 October 2015. (Twitter @CityofJoburgZA) President Jacob Zuma has extended condolences to the families of those who lost their lives on Wednesday following a pedestrian bridge collapse in Sandton on Grayston Drive. 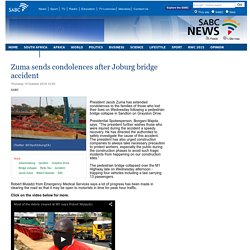 Presidential Spokesperson, Bongani Majola, says: “The president further wishes those who were injured during the accident a speedy recovery. He has directed the authorities to safely investigate the cause of this accident. The president has also urged construction companies to always take necessary precaution to protect workers, especially the public during the construction phases to avoid such tragic incidents from happening on our construction sites.” The pedestrian bridge collapsed over the M1 Highway late on Wednesday afternoon - trapping four vehicles including a taxi carrying 13 passengers. Robert Muladzi from Emergency Medical Services says a lot of progress has been made in clearing the road so that it may be open to motorists in time for peak hour traffic. Murray & Roberts to probe Joburg bridge collapse:Thursday 15 October 2015. At least two people are confirmed dead after the temporary scaffolding structure collapsed(SABC) Murray & Roberts CEO, Henry Laas, says they will investigate what went wrong in the collapse of the bridge on Grayston drive on Wednesday. 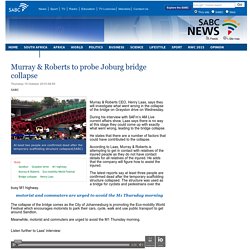 During his interview with SAFm’s AM Live current affairs show, Laas says there is no way at this stage they could come up with exactly what went wrong, leading to the bridge collapse. He states that there are a number of factors that could have contributed to the collapse. According to Laas, Murray & Roberts is attempting to get in contact with relatives of the injured people as they do not have contact details for all relatives of the injured. Joburg highway still closed following bridge collapse:Thursday 15 October 2015. Grayston Drive Bridge death toll increases to two:Wednesday 14 October 2015. Johannesburg Emergency Services says three patients are still trapped underneath the scaffolding. 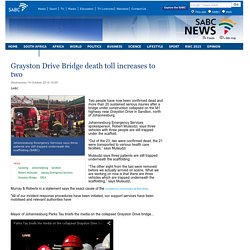 (SABC) Two people have now been confirmed dead and more than 20 sustained serious injuries after a bridge under construction collapsed on the M1 highway near Grayston Drive in Sandton, north of Johannesburg. Johannesburg Emergency Services spokesperson, Robert Mulaudzi, says three vehicles with three people are still trapped under the scaffold. “Out of the 23, two were confirmed dead, the 21 were transported to various health care facilities,” says Mulaudzi. Mulaudzi says three patients are still trapped underneath the scaffolding. “The other eight from the taxi were removed before we actually arrived on scene.

Murray & Roberts in a statement says the exact cause of the incident is not known at this time. "All of our incident response procedures have been initiated, our support services have been mobilised and relevant authorities have View The Map below For Alternative Routes: Taxi driver killed in Grayston Drive bridge collapse:Wednesday 14 October 2015. A number of people are also believed to be trapped under the collapsed bridge. 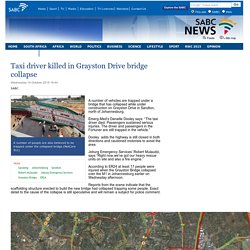 (NetCare 911) A number of vehicles are trapped under a bridge that has collapsed while under construction on Grayston Drive in Sandton, north of Johannesburg. Emerg-Med's Danielle Dooley says: “The taxi driver died. Passengers sustained serious injuries. The driver and passengers in the Fortuner are still trapped in the vehicle.” Dooley adds the highway is still closed in both directions and cautioned motorists to avoid the area. Joburg Emergency Services’ Robert Mulaudzi, says “Right now we've got our heavy rescue units on site and also a fire engine.” Investigations underway in Grayston bridge collapse tragedy:Wednesday 14 October 2015. It has now been confirmed that a third person has died from injuries sustained when the Grayston Bridge collapsed on Wednesday afternoon. 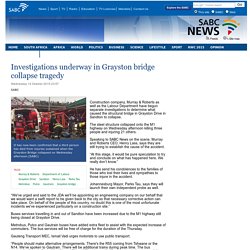 (SABC) Construction company, Murray & Roberts as well as the Labour Department have begun separate investigations to determine what caused the structural bridge in Grayston Drive in Sandton to collapse. The steel structure collapsed onto the M1 highway on Wednesday afternoon killing three people and injuring 21 others. Speaking to SABC News on the scene, Murray and Roberts CEO, Henry Lass, says they are still trying to establish the cause of the accident. “At this stage, it would be pure speculation to try and conclude on what has happened here. He has send his condolences to the families of those who lost their lives and sympathies to those injure in the accident. Johannesburg Mayor, Parks Tau, says they will launch their own independent probe as well.