Authorities against Vuwani merger decision:Monday 20 July 2015. The Vuwani protest has led to services being brought to a halt and schooling disrupted(REUTERS) 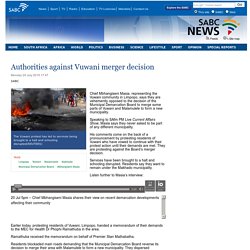 Vuwani villagers urged to object to new municipality:Sunday 26 July 2015. The Municipal Demarcation board has proposed that parts of Vuwani and Malamulele should form part of a new municipality in the Vhembe district. 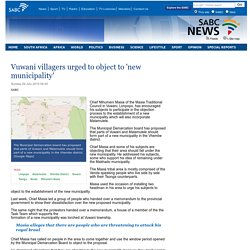 (Google Maps) Chief Nthumeni Masia of the Masia Traditional Council in Vuwani, Limpopo, has encouraged his subjects to participate in the objection process to the establishment of a new municipality which will also incorporate Malamulele. The Municipal Demarcation board has proposed that parts of Vuwani and Malamulele should form part of a new municipality in the Vhembe district. Chief Masia and some of his subjects are objecting that their area should fall under the new municipality. He addressed his subjects, some who support his idea of remaining under the Makhado municipality. The Masia tribal area is mostly comprised of the Venda speaking people who live side by side with their Tsonga counterparts. 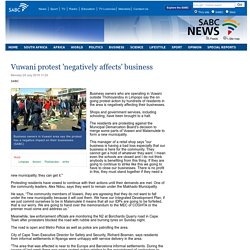 (SABC) Business owners who are operating in Vuwani outside Thohoyandou in Limpopo say the on going protest action by hundreds of residents in the area is negatively affecting their businesses. Shops and government services, including schooling, have been brought to a halt. The residents are protesting against the Municipal Demarcation Board's decision to merge some parts of Vuwani and Malamulele to form a new municipality. This manager of a retail shop says "our business is having a bad loss especially that our business is here for the community. Protesting residents have vowed to continue with their actions until their demands are met. He says, “The community members of Vuwani, they are agreeing that they do not want to fall under the new municipality because it will cost them. The road is open and Metro Police as well as police are patrolling the area. Government delegation to visit Vuwani after public protest violence:Monday 10 August 2015.

Residents have been protesting a proposal by the municipal demarcation board to merge some parts of Vuwani and Malamulele into a new municipality. 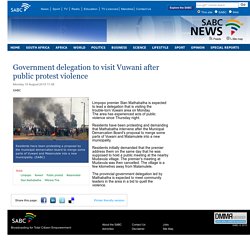 (SABC) Limpopo premier Stan Mathabatha is expected to lead a delegation that is visiting the trouble-torn Vuwani area on Monday. The area has experienced acts of public violence since Thursday night. Residents have been protesting and demanding that Mathabatha intervene after the Municipal Demarcation Board's proposal to merge some parts of Vuwani and Malamulele into a new municipality.

Residents initially demanded that the premier address them on the same day that he was supposed to hold a public meeting at the nearby Mudavula village. Limpopo Legislature slams Vuwani protests:Wednesday 2 September 2015. Some residents of Vuwani went on the rampage. 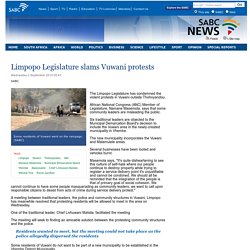 (SABC) The Limpopo Legislature has condemned the violent protests in Vuwani outside Thohoyandou. African National Congress (ANC) Member of Legislature, Namane Masemola, says that some community leaders are misleading the public. Six traditional leaders are objected to the Municipal Demarcation Board's decision to include the Vuwani area in the newly-created municipality in Vhembe. The new municipality incorporates the Vuwani and Malamulele areas. Several businesses have been looted and vehicles burnt. Masemola says, "It's quite disheartening to see this culture of self-hate where our people continue to destroy property while trying to register a service delivery point it's unjustifiable and cannot be condoned. 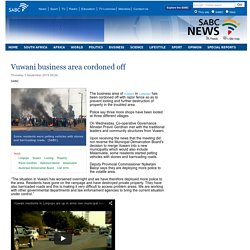 (SABC) The business area of Vuwani in Limpopo has been cordoned off with razor fence so as to prevent looting and further destruction of property in the troubled area. Police say three more shops have been looted at three different villages. On Wednesday, Co-operative Governance Minister Pravin Gordhan met with the traditional leaders and community structures from Vuwani. Upon receiving the news that the meeting did not reverse the Municipal Demarcation Board's decision to merge Vuwani into a new municipality which would also include Malamulele, some residents started pelting vehicles with stones and barricading roads. Deputy Provincial Commissioner Nyiketani Baloyi says they are deploying more police to the volatile area. Disruption of services set to continue in Vuwani :Monday 7 September 2015.

The Vuwani area has seen a violent protest action in the past week that has left public property destroyed and services disrupted. 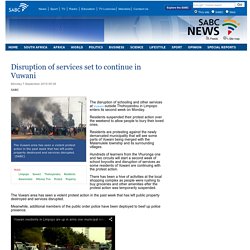 (SABC) The disruption of schooling and other services at Vuwani outside Thohoyandou in Limpopo enters its second week on Monday. Residents suspended their protest action over the weekend to allow people to bury their loved ones. Residents are protesting against the newly demarcated municipality that will see some parts of Vuwani being merged with the Malamulele township and its surrounding villages. Hundreds of learners from the Vhuronga one and two circuits will start a second week of school boycotts and disruption of services as some residents of Vuwani are continuing with the protest action. There has been a hive of activities at the local shopping complex as people were rushing to buy groceries and other amenities after the protest action was temporarily suspended. Related articles: Municipal boundaries, by sabcnewsonline. Vuwani residents in Limpopo are up in arms over municipal merger. Protesting Vuwani residents demand Zuma’s intervention. Town of Vuwani outside Louis Trichardt on shut down.