Krejcir trial enters third week:Monday 26 May 2014. Radovan Krejcir’s trial is scheduled to be concluded on Friday. 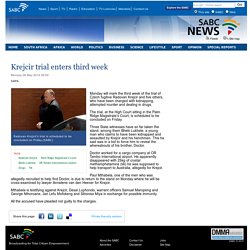 (SABC) Monday will mark the third week of the trial of Czech fugitive Radovan Krejcir and five others, who have been charged with kidnapping, attempted murder and dealing in drugs. The trial, at the High Court sitting in the Palm Ridge Magistrate's Court, is scheduled to be concluded on Friday. Three State witnesses have so far taken the stand, among them Bheki Lukhele, a young man who claims to have been kidnapped and assaulted by Krejcir and his henchmen. This he said was in a bid to force him to reveal the whereabouts of his brother, Doctor. Doctor worked for a cargo company at OR Tambo International airport. Paul Mthabela, one of the men who was allegedly recruited to help find Doctor, is due to return to the stand on Monday where he will be cross-examined by lawyer Annelene van den Heever for Krejcir. All the accused have pleaded not guilty to the charges. Krejcir case postponed:Friday 15 May 2015. Czech fugitive Radovan Krejcir made a brief appearance in the Johannesburg High Court on Friday morning.

(REUTERS) The trial of Czech fugitive Radovan Krejcir and his five co-accused has been postponed to Monday. The defence was expected to present cellphone records that they hope will disprove some of the testimony already heard in the drugs, attempted murder and kidnapping case, but one service provide had not yet submitted its records. The accused made a brief appearance in the Johannesburg High Court on Friday morning. On Wednesday last week, three mobile service providers were ordered to release cellular data to the court.

While Cell C and MTN have submitted theirs, Vodacom was only set to do so on Friday. Both the state and defence agreed that they would need more time to go through the information when they receive it, before it's presented in court. The data is going to be used to test the credibility of the evidence given by one of the witnesses, Peter Msimango. Krejcir killed Lolly Jackson: Louca :Tuesday 21 April 2015. George Louca detailed moments before Lolly Jackson's murder. 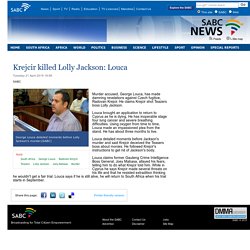 Krejcir to appear in court:Friday 24 April 2015. Radovan Krejcir and his seven co accused have made numerous court appearances in April. 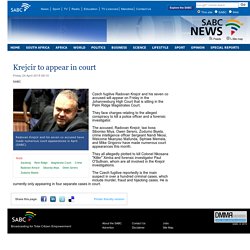 They all allegedly plotted to kill Colonel Nkosana "Killer" Ximba and forensic investigator Paul O'Sullivan, whom are all involved in the Krejcir investigations. The Czech fugitive reportedly is the main suspect in over a hundred criminal cases, which include murder, fraud and hijacking cases. Krejcir, co-accused back in court:Wednesday 29 April 2015. Krejcir back in court on Wednesday:Wednesday 8 April 2015. Radovan Krejcir and the other suspects were charged with the murder of Sam Issa at the Germiston Magistrate Court in February. 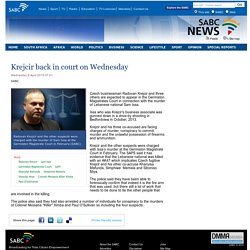 (SABC) Czech businessman Radovan Krejcir and three others are expected to appear in the Germiston Magistrates Court in connection with the murder of Lebanese national Sam Issa. Issa who was Krejcir's business associate was gunned down in a drive-by shooting in Bedfordview in October, 2013. Krejcir and his three co-accused are facing charges of murder, conspiracy to commit murder and the unlawful possession of firearms and ammunition. Krejcir and the other suspects were charged with Issa’s murder at the Germiston Magistrate Court in February. The police said they have been able to forensically confirm that indeed it is the fire arm that was used, but there still a lot of work that needs to be done to tie the other people that are involved in the killing.

Krejcir charged with drug lord Sam Issa’s murder:Friday 6 February 2015. Czech fugitive Radovan Krejcir is currently being held at the Kgosi Mampuru Prison in Pretoria while on trial for attempted murder, kidnapping and assault. 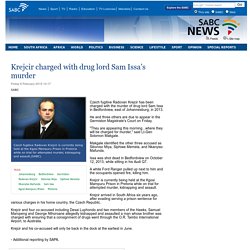 (SABC) Czech fugitive Radovan Krejcir has been charged with the murder of drug lord Sam Issa in Bedfordview, east of Johannesburg, in 2013. He and three others are due to appear in the Germiston Magistrate's Court on Friday. "They are appearing this morning...where they will be charged for murder," said Lt-Gen Solomon Makgale. Makgale identified the other three accused as Siboniso Miya, Siphiwe Memela, and Nkanyiso Mafunda. Issa was shot dead in Bedfordview on October 12, 2013, while sitting in his Audi Q7.

A white Ford Ranger pulled up next to him and the occupants opened fire, killing him. Radovan Krejcirs bail application turned down:Friday 10 January 2014. Czech fugitive Radovan Krejcir will return to the Palm Ridge Magistrate Court later this month. 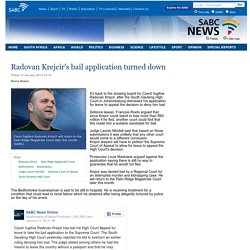 (SABC) It's back to the drawing board for Czech fugitive Radovan Krejcir, after the South Gauteng High Court in Johannesburg dismissed his application for leave to appeal the decision to deny him bail. Defence lawyer, Francois Roets argued that since Krejcir could stand to lose more than R60 million if he fled, another court could find that this made him a suitable candidate for bail. Judge Leonie Windell said that based on those submissions it was unlikely that any other court would come to a different conclusion. Krejcir lawyers will have to petition the Supreme Court of Appeal to allow for leave to appeal the High Court's decision. Prosecutor Louis Mashiane argued against the application saying there is still no way to guarantee that he would not flee. Krecjir kidnap, torture case continues :Tuesday 13 May 2014. Radovan Krejcir is accused of dealing in drugs, attempted murder and kidnapping.

(SABC) Czech businessman Radovan Krejcir and five others are expected in the High Court in Johannesburg sitting in Palm Ridge on Tuesday as their trial on charges of dealing in drugs, attempted murder, and kidnapping continues. Krejcir, Desai Luphondo, Warrant Officers Samuel Modise Maropeng and George Jeff Nthoroane, Jan Lefu Mofokeng and Siboniso Miya have pleaded not guilty to the charges.

On Monday, Prosecutor Louis Mashiane called the State's first witness, Peter Vusi Msimango to testify. Msimango, a businessman from Boksburg, was recruited to help find a man known as "Doctor", who worked at a cargo company at OR Tambo International Airport. The victim, Bheki Lukhele, is Doctor's brother. Manhunt underway after assassination attempt on Krejcir:Thursday 25 July 2013.

The attack on Krejcir is the latest in a string of underworld dealings that have led to the death of several men in Johannesburg and Cape Town. 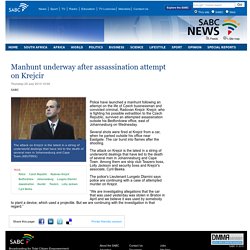 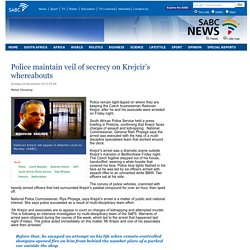 (SABC) Police remain tight-lipped on where they are keeping the Czech businessman Radovan Krejcir, after he and his associate were arrested on Friday night. South African Police Service held a press briefing in Pretoria, confirming that Krejcir faces charges of assault and kidnapping. National Commissioner, General Riah Phiyega says the arrest was executed with the help of a multi-discipline specialised team that worked around the clock. Krejcir's arrest was a dramatic scene outside Krejcir's mansion in Bedfordview Friday night. The convoy of police vehicles, crammed with heavily armed officers that had surrounded Krejcir's palatial compound for over an hour, then sped off. National Police Commissioner, Riya Phiyega, says Krejcir's arrest is a matter of public and national interest.