King Dalindyebo instructed to step down:Friday 25 July 2014. King Buyelekhaya Dalindyebo has 30 days to respond to a letter from government instructing him to step down. 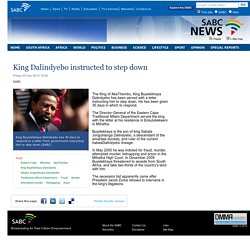 (SABC) The King of AbaThembu, King Buyelekhaya Dalindyebo has been served with a letter instructing him to step down. He has been given 30 days in which to respond. The Director-General of the Eastern Cape Traditional Affairs Department served the king with the letter at his residence in Enkulukekweni in Mthatha. Dalindyebo resolute over call for him to step down :Sunday 3 August 2014. AbaThembu king, Buyelekhaya Dalindyebo addressed thousands of people in a tent at Nkululekweni in the Eastern Cape. 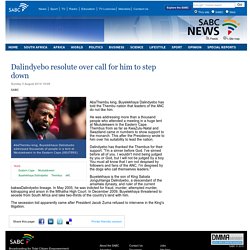 (REUTERS) AbaThembu king, Buyelekhaya Dalindyebo has told the Thembu nation that leaders of the ANC do not like him. He was addressing more than a thousand people who attended a meeting in a huge tent at Nkululekweni in the Eastern Cape. Thembus from as far as KwaZulu-Natal and Swaziland came in numbers to show support to the monarch. This after the Presidency wrote to him over his suitability to lead the nation. Dalindyebo has thanked the Thembus for their support. Arrive Alive unaware of Kings dagga habit:Sunday 12 January 2014. Arrive Alive says King Buyelekhaya Dalindyebo's dagga-smoking habit didn't have an impact on the campaign. 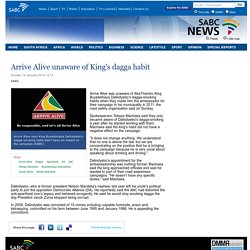 (SABC) Arrive Alive was unaware of AbaThembu King Buyelekhaya Dalindyebo's dagga-smoking habits when they made him the ambassador for their campaign in his municipality in 2011, the road safety organisation said on Sunday. Spokesperson Tshepo Machaea said they only became aware of Dalindyebo's dagga-smoking a year after he started working with them. AbaThembu king on his way out: Brother :Sunday 7 July 2013. 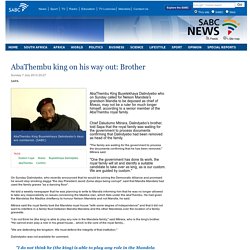 (SABC) AbaThembu King Buyelekhaya Dalindyebo who on Sunday called for Nelson Mandela's grandson Mandla to be deposed as chief of Mvezo, may not be a ruler for much longer himself, according to a senior member of the AbaThembu royal family. Chief Daludumo Mtirara, Dalindyebo's brother, told Sapa that the royal family was waiting for the government to process documents confirming that Dalindyebo had been removed as head of the family. "The family are waiting for the government to process the documents confirming that he has been removed," Mtirara said. "One the government has done its work, the royal family will sit and identify a suitable candidate to take over as king, as is our custom.

He told a weekly newspaper that he was planning to write to Mandla informing him that he was no longer allowed to take any responsibility on issues concerning the Madiba clan, which falls under the abaThembu. "We are defending the kingdom. ANCYL warns Dalindyebo over anti-Zuma outbursts:Friday 12 July 2013. Warned: AbaThembu King Buyel'ekhaya Dalindyebo has been warned against his controversial statements pertaining to President Jacob Zuma(SABC) The ANC Youth League (ANCYL) has sent a strong warning to the Abathembu King Buyelekhaya Dalindyebo saying he should refrain from insulting President Jacob Zuma or face serious consequences. 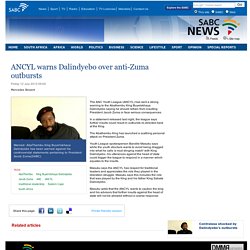 In a statement released last night, the league says further insults could result in outbursts re-directed back at the King. The Abathembu King has launched a scathing personal attack on President Zuma. Youth League spokesperson Bandile Masuku says while the youth structure wants to avoid being dragged into what he calls 'a mud slinging match' with King Dalindyebo, his utterances against the head of state could trigger the league to respond in a manner which equates to the insults.

Masuku says the ANCYL has respect for traditional leaders and appreciates the role they played in the liberation struggle. EC Traditional Affairs dept. confirms petition against Dalindyebo :Thursday 11 July 2013. This follows an unsavoury public spat that recently ensued between King Buyelekhaya Dalindyebo and Chief Mandla Mandela. 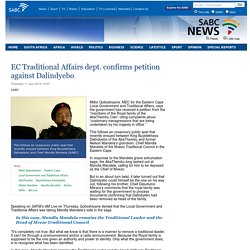 (SABC) Mlibo Qoboshiyane, MEC for the Eastern Cape Local Government and Traditional Affairs, says the government has received a petition from the “members of the Royal family of the AbaThembu Clan” citing complaints about “customary transgressions that are being undertaken by his majesty in office.” This follows an unsavoury public spat that recently ensued between King Buyelekhaya Dalindyebo of the AbaThembu and former Nelson Mandela’s grandson, Chief Mandla Mandela of the Mvezo Traditional Council in the Eastern Cape.

In response to the Mandela grave exhumation saga, the AbaThembu king lashed out at Mandla Mandela, calling for him to be deposed as the Chief of Mvezo. Speaking on SAFM’s AM Live on Thursday, Qoboshiyane denied that the Local Government and Traditional Affairs was taking Mandla Mandela’s side in the saga. “It’s completely not true. Dalindyebo should be called to order: Sisulu:Friday 12 July 2013. Public Service and Administration Minister, Lindiwe Sisulu. 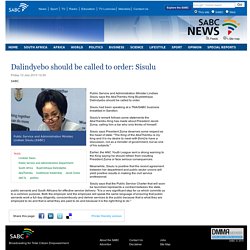 (SABC) Public Service and Administration Minister Lindiwe Sisulu says the AbaThembu King Buyelekhaya Dalindyebo should be called to order. Sisulu had been speaking at a TNA/SABC business breakfast in Sandton. Sisulu's remark follows some statements the AbaThembu King has made about President Jacob Zuma, calling him a liar who only thinks of himself. Sisulu says President Zuma deserves some respect as the head of state: "The King of the AbaThembu is my king and it is my desire to meet with [him] to have a discussion, not as a minister of government, but as one of his subjects. " Earlier, the ANC Youth League sent a strong warning to the King saying he should refrain from insulting President Zuma or face serious consequences.