UCT braces for student protest over fees:Monday 19 October 2015. UCT says it's committed to ensuring that its fees are never an obstacle to poorer students. 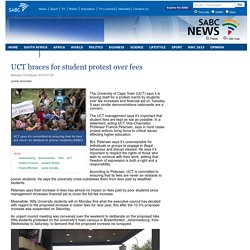 (SABC) The University of Cape Town (UCT) says it is bracing itself for a protest march by students over fee increases and financial aid on Tuesday. It says similar demonstrations nationwide are a concern. The UCT management says it's important that student fees are kept as low as possible. In a statement, acting UCT Vice-Chancellor, Professor Francis Petersen, says in most cases protest actions bring focus to critical issues affecting higher education. But, Petersen says it’s unacceptable for individuals or groups to engage in illegal behaviour and disrupt classes. According to Petersen, UCT is committed to ensuring that its fees are never an obstacle to poorer students.

Petersen says their increase in fees has almost no impact on fees paid by poor students since management increases financial aid to cover the full fee increase. Academic shutdown at Rhodes following fee hike protest :Monday 19 October 2015. Students at Rhodes University have been protesting since midnight against a proposed fee hike. 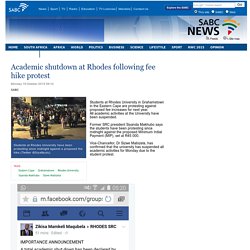 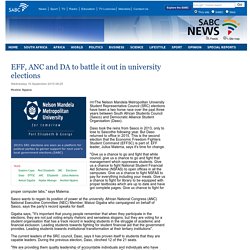 (SABC) rrrrThe Nelson Mandela Metropolitan University Student Representative Council (SRC) elections have been a two horse race over the past three years between South African Students Council (Sasco) and Democratic Alliance Student Organisation (Daso). Daso took the reins from Sasco in 2013, only to lose to Sascothe following year. But Daso returned to office in 2015. This is the second election that the Economic Freedom Fighters Student Command (EFFSC) is part of. "Give us a chance to go and fight that white council, give us a chance to go and fight that management which oppresses students. EFF command nails North West university SRC elections:Wednesday 2 September 2015. DA SRC feeds needy students in Fort Hare university:Monday 25 May 2015. About 2 000 Fort Hare students will benefit from the SRC’s funding. 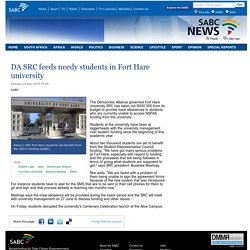 (SABC) The Democratic Alliance governed Fort Hare University SRC has taken out R450 000 from its budget to provide meal allowances to students who are currently unable to access NSFAS funding from the university. Students at the university have been at loggerheads with the university management over student funding since the beginning of this academic year. About two thousand students are set to benefit from the Student Representative Council funding. "We have got many serious problems at Fort Hare, especially with regard to funding and the processes that are being followed in terms of giving what students are supposed to get," says SRC president, Busisiwe Mashiqa. She adds, "We are faced with a problem of them being unable to sign the agreement forms because of the new system that was introduced. DASO wins SRC elections at University of Fort Hare:Friday 1 May 2015. EFF TUT students stabbed in campus residence:Sunday 30 August 2015.

Two members of the EFF at the Tshwane University of Technology (TUT) were hospitalised on Saturday. 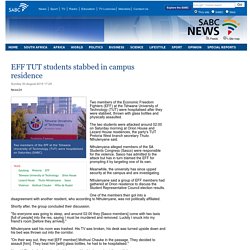 (SABC) Two members of the Economic Freedom Fighters (EFF) at the Tshwane University of Technology (TUT) were hospitalised after they were stabbed, thrown with glass bottles and physically assaulted. The two students were attacked around 02:00 on Saturday morning at Orion House and Lezard House residences, the party's TUT Pretoria West branch secretary Thuto Nthulenyane said. TUT suspends SRC:Monday 15 September 2014. TUT had decided that the academic programme would have to resume on Wednesday. 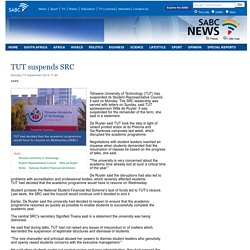 (SABC) Tshwane University of Technology (TUT) has suspended its Student Representative Council, it said on Monday. The SRC leadership was served with letters on Sunday, said TUT spokesperson Willa de Ruyter. It was suspended for the remainder of the term, she said in a statement. De Ruyter said TUT took the step in light of violent protest action at its Pretoria and Ga-Rankuwa campuses last week, which disrupted the academic programme. Negotiations with student leaders reached an impasse when students demanded that the resumption of classes be based on the progress of talks, she said. "The university is very concerned about the academic time already lost at such a critical time of the year. " De Ruyter said the disruptions had also led to problems with accreditation and professional bodies, which severely affected students.

Wits SRC meets fund raising target to help needy students:Friday 20 February 2015. Wits SRC has thanked donors who helped them reach R1m to help students turned down by NSFAS(SABC) Wits University management and the Students' Representative Council have thanked everyone that donated money to assist the over 2000 students whose National Students' Financial Aid Scheme funds were not granted. 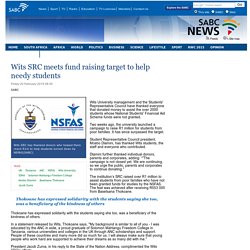 Two weeks ago, the university launched a campaign to raise R1 million for students from poor families. It has since surpassed the target. Student Representative Council president, Mcebo Dlamini, has thanked Wits students, the staff and everyone who contributed. Dlamini further thanked individual donors, parents and corporates, adding: “"The campaign is not closed yet.

Wits EFF disqualified from upcoming SRC polls:Tuesday 25 August 2015. The University of Witwatersrand has agreed to recognise the Wits EFF as a student society, but management says members who disrupted a recent election debate at the institution, will remain disqualified from participating in the upcoming SRC elections. 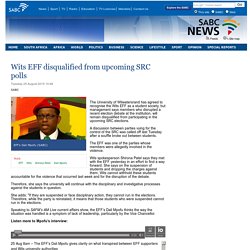 A discussion between parties vying for the control of the SRC was called off last Tuesday after a scuffle broke out between students. The EFF was one of the parties whose members were allegedly involved in the violence. Wits spokesperson Shirona Patel says they met with the EFF yesterday in an effort to find a way forward. EFF claims victory in Turfloop SRC elections:Sunday 15 March 2015. Julius Malema says the party laid good foundation at the University of Limpopo's Turfloop campus and other institutions of higher learning. 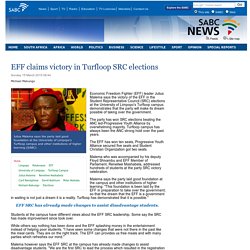