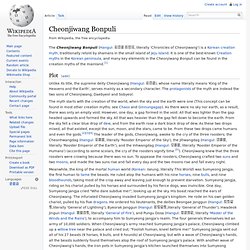 Enûma Eliš. This epic is one of the most important sources for understanding the Babylonian worldview, centered on the supremacy of Marduk and the creation of humankind for the service of the gods. 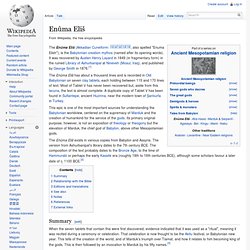 Its primary original purpose, however, is not an exposition of theology or theogony but the elevation of Marduk, the chief god of Babylon, above other Mesopotamian gods. The Enûma Eliš exists in various copies from Babylon and Assyria. The version from Ashurbanipal's library dates to the 7th century BCE. The composition of the text probably dates to the Bronze Age, to the time of Hammurabi or perhaps the early Kassite era (roughly 18th to 16th centuries BCE), although some scholars favour a later date of c. 1100 BCE.[2] Summary[edit] When the seven tablets that contain this were first discovered, evidence indicated that it was used as a "ritual", meaning it was recited during a ceremony or celebration. Jamshid. Jamshid [ǰæmšīd] (Persian: جمشید‎, Jamshīd) (Middle- and New Persian: جم, Jam) (Avestan: Yima) is a mythological figure of Greater Iranian culture and tradition. 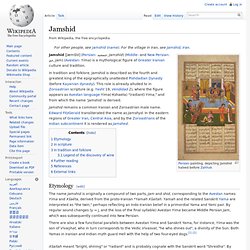 In tradition and folklore, Jamshid is described as the fourth and greatest king of the epigraphically unattested Pishdadian Dynasty (before Kayanian dynasty). This role is already alluded to in Zoroastrian scripture (e.g. Yasht 19, Vendidad 2), where the figure appears as Avestan language Yima(-Kshaeta) "(radiant) Yima," and from which the name 'Jamshid' is derived. Kumulipo. In ancient Hawaiian mythology, the Kumulipo is a chant in the Hawaiian language telling a creation story.[1] It also includes a genealogy of the members of Hawaiian royalty. 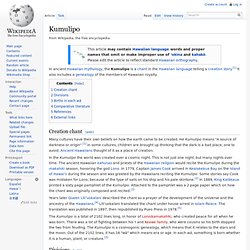 Creation chant[edit] Many cultures have their own beliefs on how the earth came to be created. He Kumulipo means "A source of darkness or origin".[1] In some cultures, children are brought up thinking that the dark is a bad place, one to avoid. Mandé creation myth. Faro created all the world that mankind has come to know from the descendants of Mangala's original egg seeds. 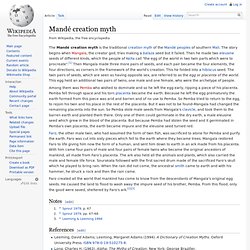 He caused the land to flood to wash away the impure seed of his brother, Pemba. From this flood, only the good were saved, sheltered by Faro's ark.[2][3] Notes[edit] References[edit] Leeming, David Adams; Leeming, Margaret Adams (1994). Pangu. Pangu (simplified Chinese: 盘古; traditional Chinese: 盤古; pinyin: Pángǔ; Wade–Giles: P'an ku; literally "Plate Ancient") was the first living being and the creator of all in some versions of Chinese mythology. 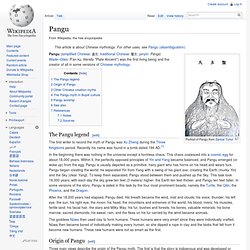 The Pangu legend[edit] In the beginning there was nothing in the universe except a formless chaos. This chaos coalesced into a cosmic egg for about 18,000 years. Within it, the perfectly opposed principles of Yin and Yang became balanced, and Pangu emerged (or woke up) from the egg. Pangu is usually depicted as a primitive, hairy giant who has horns on his head and wears furs. After the 18,000 years had elapsed, Pangu died. The goddess Nüwa then used clay to form humans. Serer creation myth. Raven in Creation. Bill Reid's sculpture Raven and The First Men, showing part of a Haida creation myth. 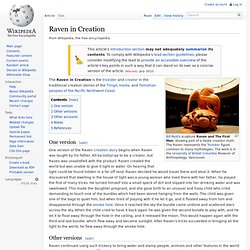 The Raven represents the Trickster figure common to many mythologies. The work is in the University of British Columbia Museum of Anthropology, Vancouver. The Raven in Creation is the trickster and creator in the traditional creation stories of the Tlingit, Haida, and Tsimshian peoples of the Pacific Northwest Coast. One version[edit] One version of the Raven creation story begins when Raven was taught by his father, Kit-ka'ositiyi-qa to be a creator, but Raven was unsatisfied with the product. Other versions[edit] Raven continued using such trickery to bring water and stamp people, animals and other features in the world with certain characteristics.[1] Many versions of Raven's theft of water are told but all center on Raven's trickery against the owner of water.

Other accounts[edit] Various myths are told of how people were created and Raven is often thought more as their reconstructor than a creator. Sumerian creation myth. Tungusic creation myth. Buninka agreed to the challenge and commanded a fir tree to rise from the sea. 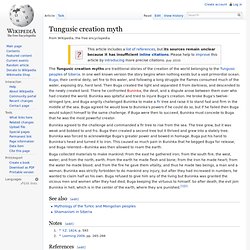 The tree grew, but it was weak and bobbed to and fro. Buga then created a second tree but it thrived and grew into a stately tree. Buninka was forced to acknowledge Buga's greater power and bowed in homage. Buga put his hand to Buninka's head and turned it to iron. This caused so much pain in Buninka that he begged Buga for release, and Buga relented—Buninka was then allowed to roam the earth. Buga collected materials to make mankind. Unkulunkulu. Unkulunkulu is the creator god in the language of the Zulu people. 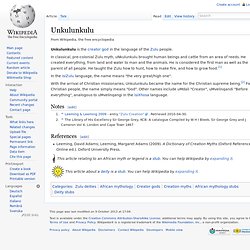 In classical, pre-colonial Zulu myth, uNkulunkulu brought human beings and cattle from an area of reeds. He created everything, from land and water to man and the animals. He is considered the first man as well as the parent of all people. He taught the Zulu how to hunt, how to make fire, and how to grow food.[1] Väinämöinen. Väinämöinen (Finnish pronunciation: [ˈʋæinæˌmøinen]) is the central character in the Finnish folklore and the main character in the national epic Kalevala. 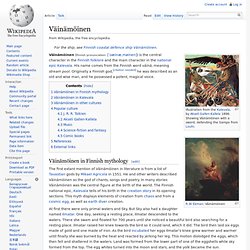 His name comes from the Finnish word väinä, meaning stream pool. Originally a Finnish god,[citation needed] he was described as an old and wise man, and he possessed a potent, magical voice. Viracocha.