Drought to cause poor harvesting in SA :Thursday 12 March 2015. Farmers are doubtful if there will be harvest due to recent dry conditions . 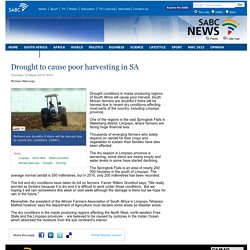 (SABC) Drought conditions in maize producing regions of South Africa will cause poor harvest. South African farmers are doubtful if there will be harvest due to recent dry conditions affecting most parts of the country, including Limpopo province. One of the regions is the vast Springbok Flats in Waterberg district, Limpopo, where farmers are facing huge financial loss.

Thousands of emerging farmers who solely depend on rainfall for their crops and vegetables to sustain their families have also been affected. Agricultural organisations call for drought relief programme:Friday 27 March 2015. Farmers in the North West are seeking assistance from government because of drought. 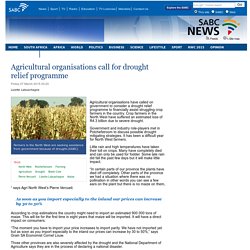 (SABC) Agricultural organisations have called on government to consider a drought relief programme to financially assist struggling crop farmers in the country. Crop farmers in the North West have suffered an estimated loss of R4.3 billion due to severe drought. Government and industry role-players met in Potchefstroom to discuss possible drought mitigating strategies. It has been a difficult year for North West farmers. Little rain and high temperatures have taken their toll on crops. “In certain parts of our province the plants have died off completely. As soon as you import especially to the inland our prices can increase by 30 to 50% According to crop estimations the country might need to import an estimated 900 000 tons of maize. Nene laments effects of drought on farm production:Friday 28 August 2015.

Minister Nhlanhla Nene says a revitalisation of the agricultural sector is needed. 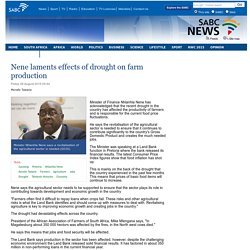 (GCIS) Minister of Finance Nhlanhla Nene has acknowledged that the recent drought in the country has affected the productivity of farmers and is responsible for the current food price fluctuations. He says the revitalisation of the agricultural sector is needed to ensure that it continues to contribute significantly to the country's Gross Domestic Product and creates the much needed jobs. The Minister was speaking at a Land Bank function in Pretoria where the bank released its financial results. The latest Consumer Price Index figures show that food inflation has shot up. Agri-SA decries drought in four provinces:Thursday 12 September 2013. Farms in the Eastern Cape, Limpopo, Free State and the North West are affected by the dry weather conditions. 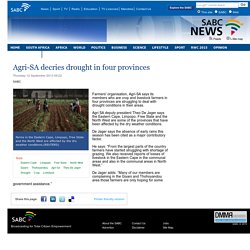 (REUTERS) Farmers' organisation, Agri-SA says its members who are crop and livestock farmers in four provinces are struggling to deal with drought conditions in their areas. Agri SA deputy president Theo De Jager says the Eastern Cape, Limpopo, Free State and the North West are some of the provinces that have been affected by the dry weather conditions. De Jager says the absence of early rains this season has been cited as a major contributory factor. KZN remains in the grips of a worsening drought. North West province declared a drought area. Northern Cape farmers, plagued by a prolonged drought. Heatwave alert issued for Gauteng, North West:Tuesday 10 February 2015. Water is the best liquid for hydration during a heat wave. 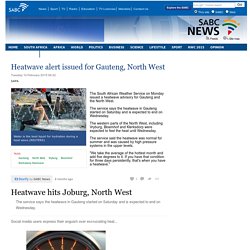 Heatwave to persist until the weekend: SA Weather Services:Tuesday 6 October 2015. People are encouraged to drink alot of water during this time. 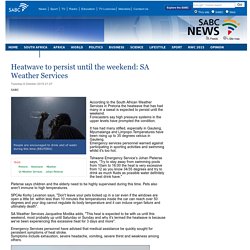 (REUTERS) According to the South African Weather Services in Pretoria the heatwave that has had many in a sweat is expected to persist until the weekend. Forecasters say high pressure systems in the upper levels have prompted the condition. It has had many stifled, especially in Gauteng, Mpumalanga and Limpopo.Temperatures have been rising up to 35 degrees celcius in Gauteng. Emergency services personnel warned against participating in sporting activities and swimming whilst it's too hot.

Tshwane Emergency Service’s Johan Pieterse says, “Try to stay away from swimming pools from 10am to 16:00 the heat is very excessive from 12 as you know 34/35 degrees and try to drink as much fluids as possible water definitely the best drink have. " Heat wave not affecting power supply: Eskom:Thursday 8 October 2015. Eskom has reiterated that it has enough coal stockpiles at its power stations. 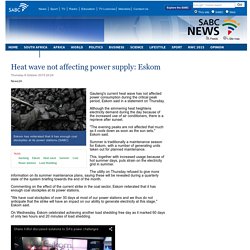 (SABC) Gauteng's current heat wave has not affected power consumption during the critical peak period, Eskom said in a statement on Thursday. Although the simmering heat heightens electricity demand during the day because of the increased use of air conditioners, there is a reprieve after sunset. "The evening peaks are not affected that much as it cools down as soon as the sun sets," Eskom said. Summer is traditionally a maintenance season for Eskom, with a number of generating units taken out for planned maintenance. This, together with increased usage because of hot summer days, puts strain on the electricity grid in summer. Scorching temperatures to persist until Tuesday:Saturday 10 October 2015. The heatwave with persistently high temperatures has affected Gauteng, parts of Limpopo and Mpumalanga. 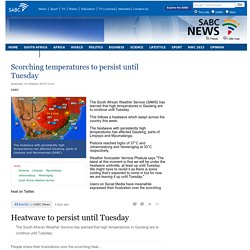 (SABC) The South African Weather Service (SAWS) has warned that high temperatures in Gauteng are to continue until Tuesday. This follows a heatwave which swept across the country this week. Water restrictions in PTA as heat wave causes water shortage:Sunday 11 October 2015. The City stressed that if the restrictions were not adhered to, the water shortage could worsen. 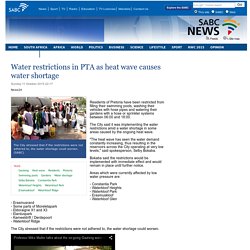 (SABC) Residents of Pretoria have been restricted from filling their swimming pools, washing their vehicles with hose pipes and watering their gardens with a hose or sprinkler systems between 06:00 and 18:00. The City said it was implementing the water restrictions amid a water shortage in some areas caused by the ongoing heat wave. "The heat wave has seen the water demand constantly increasing, thus resulting in the reservoirs across the City operating at very low levels," said spokesperson, Selby Bokaba. Bokaba said the restrictions would be implemented with immediate effect and would remain in place until further notice.