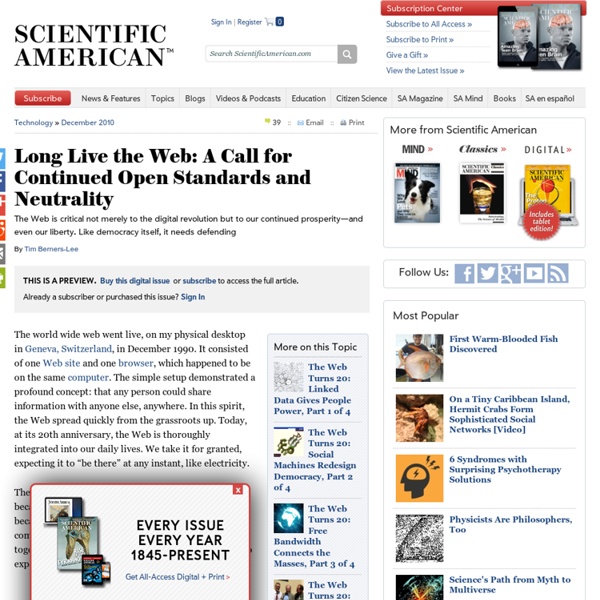 The world wide web went live, on my physical desktop in Geneva, Switzerland, in December 1990. It consisted of one Web site and one browser, which happened to be on the same computer. The simple setup demonstrated a profound concept: that any person could share information with anyone else, anywhere. In this spirit, the Web spread quickly from the grassroots up. Today, at its 20th anniversary, the Web is thoroughly integrated into our daily lives. We take it for granted, expecting it to “be there” at any instant, like electricity. The Web evolved into a powerful, ubiquitous tool because it was built on egalitarian principles and because thousands of individuals, universities and companies have worked, both independently and together as part of the World Wide Web Consortium, to expand its capabilities based on those principles. Select an option below: Customer Sign In *You must have purchased this issue or have a qualifying subscription to access this content

Android phones keep location cache, too, but it's harder to access After this week's disturbing revelation that iPhones and 3G iPads keep a log of location data based on cell tower and WiFi base station triangulation, developer Magnus Eriksson set out to demonstrate that Android smartphones store the exact same type of data for its location services. While the data is harder to access for the average user, it's as trivial to access for a knowledgeable hacker or forensics expert. On Wednesday, security researchers Alasdair Allan and Pete Warden revealed their findings that 3G-capable iOS devices keep a database of location data based on cell tower triangulation and WiFi basestation proximity in a file called "consolidated.db." The iPhone, as well as 3G-equipped iPads, generate this cache even if you don't explicitly use location-based services. This data is also backed up to your computer every time it is synced with iTunes.

MediaBerkman » Blog Archive » Cameran Ashraf on #iranelection: The digital media response to the 2009 Iranian election Cameran Ashraf presents how social and digital media play a crucial role in helping mass social movements coordinate and communicate effectively. With Iran as a case study, this presentation explores the role new communication technologies are playing in the post-election unrest, how people outside of Iran are helping through digital media, and the Iranian government’s efforts at maintaining its information border. Click Above for Video…or download the OGG video format! Share! Who is Neustar? Brad Stone at the New York Times reports on an industry group working on a new platform for portable digital movie downloads: The [Digital Entertainment Content Ecosystem or DECE] is setting out to create a common digital standard that would let consumers buy or rent a digital video once and then play it on any device... Under the proposed system, proof of digital purchases would be stored online in a so-called rights locker, and consumers would be permitted to play the movies they bought or rented on any DECE-compatible device.

Mobile Surveillance - A Primer Share This Mobiles can be useful tools for collecting, planning, coordinating and recording activities of NGO staff and activists. But did you know that whenever your phone is on, your location is known to the network operator? Or that each phone and SIM card transmits a unique identifying code, which, unless you are very careful about how you acquire the phone and SIM, can be traced uniquely to you? With cameras, GPS, mobile Internet come ever more dangerous surveillance possibilities, allowing an observer, once they have succeeded in gaining control of the phone, to turn it into a sophisticated recording device. Getting the Message? Police Track Phones with Silent SMS In June 2011, Colette Giudicelli, a senator representing the Maritime Alps region of France, wrote to Claude Gueant, the French Interior Minister: Many foreign police and intelligence services use clandestine “Silent” SMS to locate suspects or missing persons. This method involves sending an SMS text message to the mobile phone of a suspect, an SMS that goes unnoticed and sends back a signal to the sender of the message. Colette Giudicelli would like to know whether this procedure has been used in France. Seven months later, and there has still been no response from the French government.

This Internet provider pledges to put your privacy first. Always. Nicholas Merrill is planning to revolutionize online privacy with a concept as simple as it is ingenious: a telecommunications provider designed from its inception to shield its customers from surveillance. Merrill, 39, who previously ran a New York-based Internet provider, told CNET that he's raising funds to launch a national "non-profit telecommunications provider dedicated to privacy, using ubiquitous encryption" that will sell mobile phone service and, for as little as $20 a month, Internet connectivity. The ISP would not merely employ every technological means at its disposal, including encryption and limited logging, to protect its customers. It would also -- and in practice this is likely more important -- challenge government surveillance demands of dubious legality or constitutionality. A decade of revelations has underlined the intimate relationship between many telecommunications companies and Washington officialdom. Like the eavesdropping system that President George W.

Cell Phone Location Tracking Public Records Request Of all of the recent technological developments that have expanded the surveillance capabilities of law enforcement agencies at the expense of individual privacy, perhaps the most powerful is cell phone location tracking. And now, after an unprecedented records request by ACLU affiliates around the country, we know that this method is widespread and often used without adequate regard for constitutional protections, judicial oversight, or accountability. All cell phones register their location with cell phone networks several times a minute, and this function cannot be turned off while the phone is getting a wireless signal. The threat to personal privacy presented by this technology is breathtaking. To know a person's location over time is to know a great deal about who a person is and what he or she values.

Mobile Carriers Lobby Against Cell Phone Location Privacy Bill Tracking a Sprint Nextel cellphone. Image: U.S. District Court -- Southern District of Ohio. Cellphone companies are objecting to proposed California legislation that would force them to publicly report the number of times they turn over cellphone location information to police and federal agents, arguing that it’s too burdensome, and would take time away from the important work of sharing customer data with cops “day and night.” At issue is California’s SB 1434, a bill that would prohibit carriers from turning over locational data to police without a warrant. That data can include when and where a phone was when it made or received calls; a phone’s whereabouts as it pings cellphone towers or, in the extreme case, a phone’s GPS history.

Senators strip reporting requirement from location privacy bill Senator Mark Leno’s bill banning warrantless government searches of cell phone location information survived its first test at the California State Legislature, but it didn’t emerge unscathed. The ACLU of Northern California, a co-sponsor of the measure, told The Chronicle that the California Location Privacy Bill passed through the Public Safety Committee late Tuesday, meaning it’s headed for a full vote later this year. But Senators Curren Price Jr. (D-Inglewood) and Joel Anderson (R-El Cajon) refused to vote in favor of SB 1434, unless a provision was removed that would force mobile companies to disclose how often they turned over information and for what purposes.

Spy tech secretly embeds itself in phones, monitors and operates them from afar In 2008, a Reston, VA based corporation called Oceans' Edge, Inc. applied for a patent. On March, 2012 the company's application for an advanced mobile snooping technology suite was approved. The patent describes a Trojan-like program that can be secretly installed on mobile phones, allowing the attacker to monitor and record all communications incoming and outgoing, as well as manipulate the phone itself. Oceans' Edge says that the tool is particularly useful because it allows law enforcement and corporations to work around mobile phone providers when they want to surveil someone's phone and data activity. Instead of asking AT&T for a tap, in other words, the tool embeds itself inside your phone, turning your device against you. A former employee of Oceans' Edge notes on his LinkedIn page that the company's clients included the FBI, Drug Enforcement Agency, and other law enforcement.

Indeed ! Pearltrees is closer to a video game than a simple web page. This is the case of much rich web applications, flash or not. by nicolas Dec 6

Might be flash... or just the complexity flash is handling. Streaming a video, creating a rich interface layout or managing a real time game are all actions that require more ressources than displaying a text page with a few images. Those actions are typically performed in Flash, but they would require significant computer resources in any language. by Patrice Dec 6

I did check by monitoring activity before mentioning. I did notice a big difference before and after using Flash. Have you monitored yourself? I was told Flash would slow down, I hadn't notice that but the laptop battery and increased noise, yes. by clarinette02 Dec 6

Some people tend to credit Flash for just wathever issue they have on the Web... and this is often unfair. by Patrice Dec 6

ok, gr8 good news to hear. one more request: I often get my browser - Firefox - frozen and battery usage due to Flash I have been told. Am I the only one and could anything be done to remedy? by clarinette02 Dec 6

Perlenkette. They are based upon them. Check out this blog post by our CEO, Patrice Lamothe: by ostarr Dec 6

Don't worry clarinette, you wont lose anything when will drop the "beta" logo. Besides you can export your data by clicking the "export" tab in the settings :-) by Patrice Dec 5

I love pearltrees but it's only Beta mode. I am hoping not to loose all these compilations. Also, I wish there could be lexique of all links. would make it easier to find them. by clarinette02 Dec 5

I think so. That is why I love this project and its potential. by nukem777 Dec 5

The values Tim Berners-Lee is advocating aren't they very much identical to the ones pearltrees is supporting? by perlenkette Dec 5

The Web is critical not merely to the digital revolution but to our continued prosperityand even our liberty. Like democracy itself, it needs defending By Tim Berners-Lee by drone Nov 30