Know Your Rights: What To Do If You're Stopped By Police, Immigration Agents or the FBI 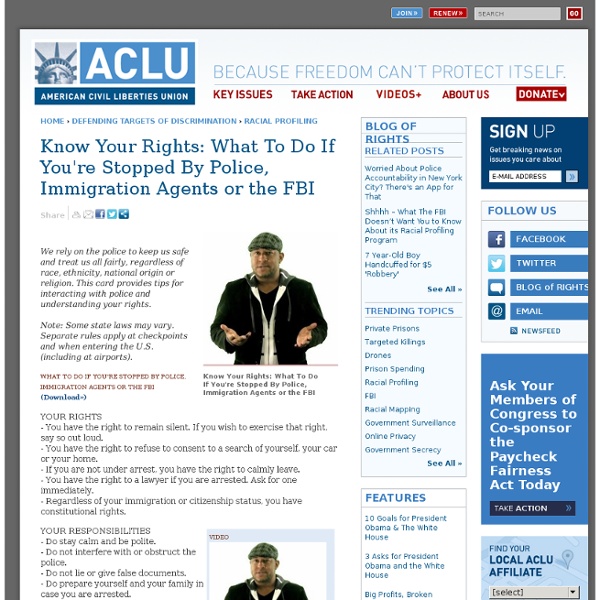 Political Hell A powerful senator dies after a prolonged illness. His soul arrives in heaven and is met by St. Peter at the entrance. "Welcome to Heaven," says St. Peter. "No problem, just let me in," says the guy. "Well, I'd like to but I have orders from higher up. "Really, I've made up my mind. "I'm sorry but we have our rules." And with that, St. "Now it's time to visit Heaven." So 24 hours pass with the head of state joining a group of contented souls moving from cloud to cloud, playing the harp and singing. "Well then, you've spent a day in Hell and another in Heaven. He reflects for a minute, then the senator answers, "Well, I would never have said it, I mean Heaven has been delightful, but I think I would be better off in Hell." So St. The Devil looks at him, smiles and says, "Yesterday we were campaigning!

US freezes Chicago Palestinian leader's bank accounts The US government has frozen the bank accounts belonging to Hatem Abudayyeh, a Palestinian community organizer and director of a social service organization serving the Arab community in Chicago, and his wife, Naima. Meanwhile, several members of Congress have written to the Obama administration to express their concerns about violations in civil liberties as a result of earlier government actions toward Abudayyeh and other activists. The freezing of the Abudayyeh family’s bank accounts on Friday, 6 May is the latest development in a secret grand jury investigation that has been launched by US District Attorney Patrick Fitzgerald’s office in Chicago. The freezing of the accounts has raised concerns that criminal indictments in the case may be imminent. “I was downtown [in Chicago] on Friday, I had parked my car in a garage and when I tried to use my debit card to get out, it was declined,” Hatem Abudayyeh, director of the Arab American Action Network, told The Electronic Intifada.

GOP budget cuts would kill 700,000 jobs: report By Sahil KapurMonday, February 28, 2011 12:30 EDT WASHINGTON – The Republican budget proposal to sharply cut federal spending would cost 700,000 jobs through 2012, according to the independent analyst Moody’s. In a new report obtained Monday by the Washington Post, Moody’s Analytics chief economist Mark Zandi analyzes the House Republican budget proposal cutting spending by $61 billion this year and projects that it will curtail job growth. “The House Republicans’ proposal would reduce 2011 real GDP growth by 0.5% and 2012 growth by 0.2%. This would mean some 400,000 fewer jobs created by the end of 2011 and 700,000 fewer jobs by the end of 2012,” Zandi concluded. The numbers challenge the GOP’s philosophy that government spending cuts help create jobs and grow the economy, a view that puts the party at odds with Democrats. House Republicans passed their budget just over a week ago by a 235-189 margin, setting up a stand off with President Barack Obama and Democrats.

Hombres T: Archivo The Universal Declaration of Human Rights Whereas recognition of the inherent dignity and of the equal and inalienable rights of all members of the human family is the foundation of freedom, justice and peace in the world, Whereas disregard and contempt for human rights have resulted in barbarous acts which have outraged the conscience of mankind, and the advent of a world in which human beings shall enjoy freedom of speech and belief and freedom from fear and want has been proclaimed as the highest aspiration of the common people, Whereas it is essential, if man is not to be compelled to have recourse, as a last resort, to rebellion against tyranny and oppression, that human rights should be protected by the rule of law, Whereas it is essential to promote the development of friendly relations between nations, Whereas Member States have pledged themselves to achieve, in co-operation with the United Nations, the promotion of universal respect for and observance of human rights and fundamental freedoms, Article 1. Article 2. Article 3.

Colorado Transgender Girl Banned From First-Grade School Bathroom <br/><a href=" US News</a> | <a href=" Business News</a> Copy Coy Mathis, born a male triplet, has behaved like a girl since she was 18 months old. Since being enrolled at Eagle Elementary School in Fountain, Colo., the 6-year-old has presented as female and wearing girls' clothing. But since December, school officials have told her parents she can no longer use the female facilities and ordered her to use the boys' or nurse's bathroom. "We want Coy to have the same educational opportunities as every other Colorado student," said Kathryn Mathis, Coy's mother. Now Jeremy and Kathryn Mathis, with the help of the Transgender Legal and Defense Education Fund (TLDEF), have filed a complaint with the Colorado Civil Rights Division on behalf of Coy, alleging that the school has violated her rights. "Our eye is focused on getting Coy back into school," said TLDEF's executive director Michael Silverman.