Yashar Ali: A Message to Women From a Man: You Are Not "Crazy" 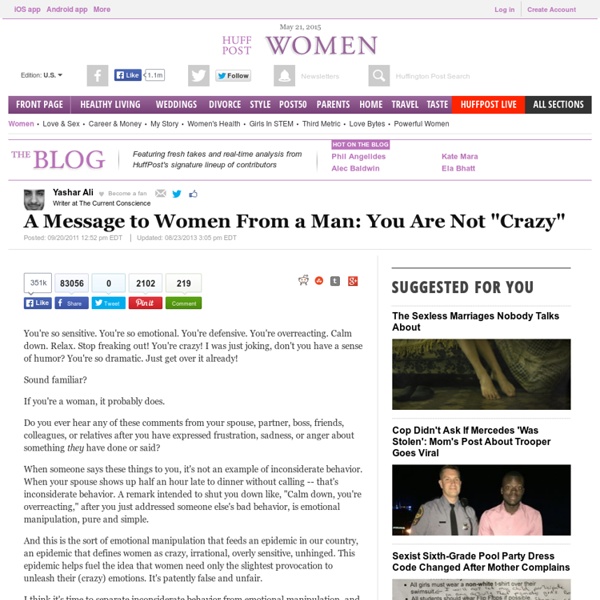 You're so sensitive. You're so emotional. You're defensive. You're overreacting. Calm down. Relax. Sound familiar? If you're a woman, it probably does. Do you ever hear any of these comments from your spouse, partner, boss, friends, colleagues, or relatives after you have expressed frustration, sadness, or anger about something they have done or said? When someone says these things to you, it's not an example of inconsiderate behavior. And this is the sort of emotional manipulation that feeds an epidemic in our country, an epidemic that defines women as crazy, irrational, overly sensitive, unhinged. I think it's time to separate inconsiderate behavior from emotional manipulation, and we need to use a word not found in our normal vocabulary. I want to introduce a helpful term to identify these reactions: gaslighting. The term comes from the 1944 MGM film, Gaslight, starring Ingrid Bergman. And the act of gaslighting does not simply affect women who are not quite sure of themselves. Why?

groupthink.jezebel Female programmer who has worked in the game industry here... I get "fake geek girl" BS in job interviews. I have skipped applying for programming jobs because the ads promote the "bro-centric company culture," where it is common to drink beer and no one complains about your naughty sense of humor. I have applied at companies that won't interview me for the position that I'm qualified for because the type of programming that I do is more typical for guys and this other type over here that I don't do is more typical for girls; in order to show how inclusive of women they are, they strongly encourage me to apply for [girl job] despite me being grossly overqualified for [boy job that I can't be interviewed for]. So let me tell you why there are so few games with strong female protagonists and so few games with characters that women can identify with as idealized heroes: games are made by men for themselves. I don't want games for women by women.

"Through a rapist's eyes"~~This might save your life It seems that alot of attackers use some tactic to get away with violence. Not many people know how to take care of themselves when faced with such a situation. Everyone should read this especially each and every girl in this world. THOUGHT THIS WAS GOOD INFO TO PASS ALONG… FYI - Through a rapist’s eyes! A group of rapists and date rapists in prison were interviewed on what they look for in a potential victim and here are some interesting facts: 1] The first thing men look for in a potential victim is hairstyle. ——————————————————————————- POINTS THAT WE SHOULD REMEMBER: 1] If someone is following behind you on a street or in a garage or with you in an elevator or stairwell, look them in the face and ask them a question, like what time is it, or make general small talk: can’t believe it is so cold out here, we’re in for a bad winter. Send this to any woman you know that may need to be reminded that the world we live in has a lot of crazies in it and it’s better safe than sorry.

#497: On “keeping the peace” with an unlikeable mansplainer Hello Captain Awkward & Team! A couple of years ago my mother met a new partner, A. He has many fine qualities such as being handy with building things, generous with his time and always willing to lend a hand. He makes my mother very happy and I am happy for her. He is also the biggest mansplainer ever. If we talk about something and I make an assertion he disagrees with he questions me, he always demands sources (as in right now at the dinner table I should cite article, author and page number). If we have a discussion about something and he does not believe me and my boyfriend steps in and says The. He is insecure and must always have what other people have when it comes to food, candy & similar. I am an assertive person and I do not as a general rule let people trample all over me. How can I deal with all of this in a mature, assertive manner? Sincerely, Hysterical Historian Dear Historian: Let’s talk about what “keeping the peace” means in a family situation like this. That’s okay.

Raising Confident Girls - How to Raise Confident Daughters It’s not entirely up to you to raise a confident young girl. When girls have a close relationship with their father, it can help promote successful relationships as adults, says Mramor. Fathers naturally pay a different kind of attention to their daughters, she adds, such as engaging in more physical activities together. Ask your child’s father (or, if there’s no father in the picture, another trusted man in your daughter’s life, such as your father, brother or a good friend) to take her along on an errand, or do chores with her, like raking leaves or fixing the car. “Men are more likely to talk with children while doing other activities, rather than have face-to-face chats,” says Mramor.

Seeing a Woman: A conversation between a father and son | From One Degree to Another | Nate Pyle Someday I am going to have to have the conversation with my son. No, not the conversation all parents dread giving and all kids are mortified having. I enjoy making people uncomfortable so that conversation should be fun. No, I’m talking about another conversation. Hey, come here. A lot of people will try and tell you that a woman should watch how she dresses so she doesn’t tempt you to look at her wrongly. Look right at me. You are more than that. There are two views regarding a woman’s dress code that you will be pressured to buy into. Unfortunately, much of how the sexes interact with each is rooted in fear. A woman’s body is beautiful and wonderful and mysterious. I’m not telling you to not look at women. My hope is that changing how you see women will change how you are around them. Because in the end, they want to be with you. Ultimately, it’s what you want.

Why Hillary Clinton Won't Pay for Disparaging Her Husband's Accusers Yes, she behaved badly. But under the circumstances, how many people would've managed better? And how is it relevant to the job she may seek? Reuters When I wrote about attacks on Bill Clinton earlier this week, I focused on how they might help Republicans confronting the charge that they're waging a "war on women." A retrospective on Monica Lewinsky, Paula Jones, and Gennifer Flowers won't help the GOP when it comes to the politics of abortion or contraception. In passing, I added that the GOP would nevertheless be foolish to attack Hillary Clinton over her husband's sexual indiscretions, though doing so will be a temptation. Any attack on Hillary Clinton would have to clear a high hurdle: The public wisely presumes that it's unfair to attack a woman for her husband's misbehavior. Try the following thought experiment: Chris Christie, or Sarah Palin, or Andrew Cuomo is asked by a friend about sexual harassment allegations against a powerful Senator. That doesn't make it right.

"Okay, so here's why girls don't get flattered when guys comment on their bodies." Recline! I had an epiphany the other day. I was in the middle of marking up a memo on U.S. drone policy while simultaneously ordering a custom-decorated cake for my daughter's sixth grade musical cast party and planning my remarks for a roundtable on women in national security. Suddenly, it hit me: I hate Sheryl Sandberg. It's not what you're thinking. I don't hate Sheryl Sandberg because she's so rich, or because she's the COO of Facebook, or because she has gleaming, meticulously coiffed hair. True, Facebook is the Internet equivalent of Shiva*, Destroyer of Worlds, and my own hair will never approach the glossy perfection of Sheryl Sandberg's -- but I can find it in my heart to overlook these things. My hatred of Sheryl Sandberg is also nothing personal. "Did we know Sheryl Sandberg?" She gave me a funny look. "I can't remember," I explained. "If you knew her, you would remember," said Suzanne. That explained it. This, of course, is also why I hate her. I resolved to do better. Why?

Motherhood isn’t the “world’s toughest job” When Boston agency Mullen posted a listing for what sounded like the world’s worst job, 24 intrepid job seekers stepped up and applied. The full-time, “24/7 on call and pro bono/unpaid” director of operations job included truly hideous requirements like: “Able to work 135+ hours a week,” “Willing to forgo any breaks,” “Able to lift up to 75 lbs. on a regular basis” and “Able to manage a minimum of 10-15 projects at one time.” For all its grueling demands, though, the listing did promise “infinite opportunities for personal growth and rewards” and “a lifetime of purpose and meaningful connection.” Shockingly, the job wasn’t in publishing. The spot, for American Greetings’ CardStore, features the intrepid applicants interviewing via webcam for the position. Yeah, thanks for the props, but I have to say, I haven’t rolled my eyes this hard since Dove’s latest “Ladies are so gullible they think a patch can give them self-esteem!”

17 Lies We Need to Stop Teaching Girls About Sex Whether it's the constant fretting over Miley Cyrus' influence on school girls or the growing (and troubling) tradition of Purity Balls, it's clear that society has a fascination with young women's sexuality — especially when it comes to controlling it. But what are we actually teaching today's girls about sex? Fueled by outdated ideals of gender roles and the sense that female sexuality is somehow shameful, there seem to be certain pernicious myths about girls and sex that just won't die. That sex education in America has gaping holes in its curriculum hasn't helped much, either; in a recent Centers for Disease Control (CDC) report just 6 out of 10 girls said that their schools' sex ed program included information on how to say no to sex. This lack of personal agency was reflected in a forthcoming study by sociologist Heather Hlavka at Marquette University as well, which found that many young girls think of sex simply as something that is "done to them." Image Credit: Flickr

X-Men Days of Future Past Women I don’t like time travel. Excusing the excuse that it’s a big ball of wibbly-wobbly timey-wimey stuff, most Hollywood time travel consists of altering linear timelines to forestall mistakes, death, and apocalyptic disaster. At its best, it comes across as the screenwriting equivalent of a neat parlor trick, at its worst it’s sloppy, plot-hole-filled writing that has to use sci-fi mumbo-jumbo to cover its own tracks. Though we’ll get into the details below, a canon shift of this magnitude in book-to-film adaptation would normally inspire internet outrage, essays about the changes, and hot debate between fans. To solve this mystery to our satisfaction, let’s do a touch of time traveling ourselves; to 1981, when the original Days of Future Past was published cross-title in the X-Men and Uncanny X-Men books. Before spinning off into conspiracy theory, we should address some of the more reasonable explanations for this change. Sounds about right.