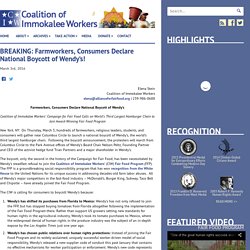 Following the boycott announcement, the protesters will march from Columbus Circle to the Park Avenue offices of Wendy’s Board Chair Nelson Peltz, Founding Partner and CEO of the activist hedge fund Trian Partners and a major shareholder in Wendy’s. Univision Launches Campaign To Register 3 Million New Latino Voters. “In the past, we were described as the sleeping giant, but the giant has awakened. 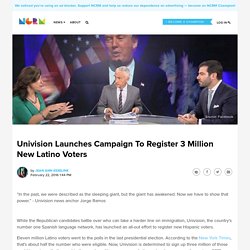 Now we have to show that power.” - Univision news anchor Jorge Ramos While the Republican candidates battle over who can take a harder line on immigration, Univision, the country's number one Spanish language network, has launched an all-out effort to register new Hispanic voters. Eleven million Latino voters went to the polls in the last presidential election. According to the New York Times, that's about half the number who were eligible. Now, Univision is determined to sign up three million of those could-be voters - that's equal to the number of how many new Latino voters have come of age since 2012. The Univision campaign will include: "The rule is no one can make it to the White House without the Hispanic vote,” said Jorge Ramos, the network’s superstar news host. 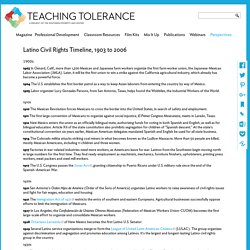 Later, it will be the first union to win a strike against the California agricultural industry, which already has become a powerful force. 1904 The U.S. establishes the first border patrol as a way to keep Asian laborers from entering the country by way of Mexico. 1905 Labor organizer Lucy Gonzales Parsons, from San Antonio, Texas, helps found the Wobblies, the Industrial Workers of the World. 1910s 1910 The Mexican Revolution forces Mexicans to cross the border into the United States, in search of safety and employment. 1911 The first large convention of Mexicans to organize against social injustice, El Primer Congreso Mexicanista, meets in Laredo, Texas. 1912 New Mexico enters the union as an officially bilingual state, authorizing funds for voting in both Spanish and English, as well as for bilingual education. 1917 The U.S.

After Marriage Equality, What? Supreme Court rules states must allow same-sex marriage. In the 5-4 ruling, Justice Anthony Kennedy wrote for the majority with the four liberal justices. 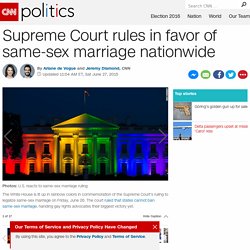 Each of the four conservative justices wrote their own dissent. Nearly 46 years to the day after a riot at New York's Stonewall Inn ushered in the modern gay rights movement, the decision could settle one of the major civil rights fights of this era. The language of Kennedy's opinion spoke eloquently of the most fundamental values of family, love and liberty. "No union is more profound than marriage, for it embodies the highest ideals of love, fidelity, devotion, sacrifice and family," Kennedy wrote. "In forming a marital union, two people become something greater than they once were.

" 'Equal dignity in the eyes of the law' "Their hope," Kennedy wrote, "is not to be condemned to live in loneliness, excluded from one of civilization's oldest institutions. In a dissent, Justice Antonin Scalia blasted the Court's "threat to American democracy. " Obama: 'Congratulations' 14 couples Sgt.