The history of the Aboriginal Tent Embassy 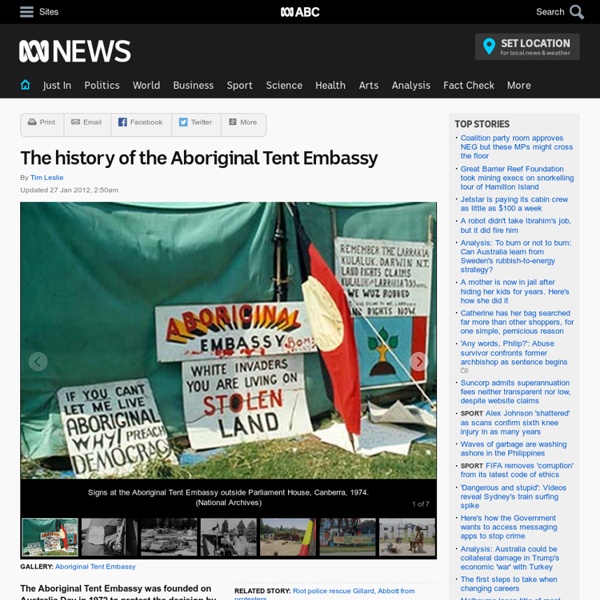 Updated 27 Jan 2012, 2:50amFri 27 Jan 2012, 2:50am Gallery: Aboriginal Tent Embassy The Aboriginal Tent Embassy was founded on Australia Day in 1972 to protest the decision by the McMahon Liberal government to reject a proposal for Aboriginal Land rights. The government instead planned to implement a lease system, conditional on the ability of Indigenous people to make economic and social use of the land, and excluding rights to mineral and forestry resources. Four Indigenous activists - Michael Anderson, Billy Craigie, Bertie Williams and Tony Coorey - set up the protest at 1.00am under a beach umbrella on the lawns of Parliament House (Old Parliament House). The movement quickly gained traction, with more and more tents being erected and numbers at one point swelling to 2,000. On July 20, after the Government modified a law relating to trespass on Commonwealth lands, Police moved in and forcibly dismantled the embassy. Related:  Year 10 History : Rights & Freedoms • Land Rights • Indigenous Rights

Aboriginal Tent Embassy Aboriginal Tent Embassy 1972: Aboriginal Tent Embassy established in front of Parliament House, Canberra John Newfong, Identity, 1972: With its flags fluttering proudly in the breeze, the Aboriginal Embassy on the lawns opposite Federal Parliament has been one of the most successful press and parliamentary lobbies in Australian political History. Land rights struggle Since European settlement, Indigenous Australians have been fighting to retain the rights to their traditional lands. In 1966, 200 Gurindji stockmen, domestic workers and their families walked off Wave Hill Station, beginning a strike that would last seven years. The 1967 referendum, in which Aboriginal Australians were finally recognised as citizens, also provided more momentum to the land rights struggle by raising the profile of Indigenous issues with the wider Australian public. The 1971 Milirrpum v Nabalco Northern Territory Supreme Court case also highlighted the issue of land rights. Beginning Growing support After 1972

Timeline: Aboriginal Tent Embassy The theme of this year's NAIDOC Week is the 'Spirit of the Tent Embassy: 40 years on'. Our timeline has the history of the protest, which has come to symbolise the campaign for equal rights for Indigenous Australians… January 1972 - Four Aboriginal men - Michael Anderson, Billy Craigie, Bertie Williams and Tony Coorey - set up the Aboriginal Tent Embassy opposite the then Parliament House in Canberra overnight on Australia Day, 26th January 1972. They put a beach umbrella in the ground as a symbolic first stake proclaiming Australia as Aboriginal land, in protest at the refusal of the Liberal William McMahon government to recognise Aboriginal land rights. It had ruled that land could only be leased, and without any rights to mineral or forestry resources. The four camped under the umbrella and the protest quickly grew to at least a dozen tents with up to 2,000 supporters at one point. July 1972 - Police moved in after the government banned squatting on parliamentary lawns.

Collaborating for Indigenous Rights 1957-1973 Aboriginal Embassy, 1972 We want land rights, not handouts Alan Sharpley with placard, Bob Perry in a Ningla-a-Na T-shirt and John Newfong with hands on hips at the Aboriginal Tent Embassy in Canberra. The Pitjantjatjara expression Ningla-a-Na is translated as 'we are hungry for our land'. Source: Ken Middleton collection, National Library of Australia Late on Australia Day 1972, four young Aboriginal men erected a beach umbrella on the lawns outside Parliament House in Canberra and put up a sign which read 'Aboriginal Embassy'. Over the following months, supporters of the embassy swelled to 2000. This political action was initiated and implemented by Aboriginal activists.

The Land Indigenous people have occupied Australia for at least 60 000 years and have evolved with the land. NSW Bark canoe E045964 Photographer: Stuart Humphreys © Australian Museum Changing it and changing with it. "I feel with my body. For Indigenous Australians the land is the core of all spirituality and this relationship has been deeply misunderstood over the past 200 years or so. When European colonisers first arrived in Australia they encountered an unfamiliar land occupied by people they didn't understand. Land Rights "It is my father's land, my grandfather's land, my grandmother's land. The history of the struggle for land rights goes back to the earliest days of the European occupation of Australia. The struggle for land rights continues today through the legal and political systems. Native Title What is Native Title? "It is imperative in today's world that the common law should neither be nor be seen to be frozen in an age of racial discrimination." Eddie Mabo The fight for Land Rights

Mabo - a timeline Posted It has been 20 years today since High Court handed down its decision on Mabo v Queensland (No 2), the landmark case known as Mabo, which paved the way for recognition of native title in Australia. News Online takes a look at the lead-up to the decision and how it changed the face of Australian society: Torres Strait Islander Eddie Koiki Mabo, who is at the time working as a gardener at James Cook University in Townsville, finds out he does not own the land back on Murray Island where he grew up. A land rights conference is held at James Cook University where Mr Mabo makes a speech outlining the land ownership and inheritance system on Murray Island. A lawyer at the conference suggests there should be a test case on claiming land rights through the court system. Central to the case is challenging the concept of terra nullius - that land claimed by Europeans on white settlement was uninhabited. Sadly Mr Mabo is not present to celebrate the victory.

Aboriginal Tent Embassy, Canberra [The Aboriginal Tent Embassy is] by far the most successful Aboriginal action of the 20th century. — Gary Foley, Aboriginal activist What led to the creation of the Aboriginal Tent Embassy? In the 1970s, inspired by the Black Power movement in the US, Aboriginal people were politically very active. Land rights were considered the key to economic independence, and land the base to generate resources and employment. To many it came as a shock when in April 1971 the Northern Territory Supreme Court decided against Aboriginal people and in favour of a mining company to have access to Aboriginal land. Aboriginal people travelled to Canberra to ask the Prime Minister of the time, William McMahon, to give them title to their land, royalties from the mining operations, a right to consent to or reject further development on their land, and the land to be returned once mining operations finished. If people think this is an eyesore, well it is the way it is on government settlements. Fact

Collaborating for Indigenous Rights 1957-1973 Land rights march in Melbourne, 1968 Students, Aboriginal activists and others respond to Cabinet's refusal to make tribal lands available to the Gurindji of Wave Hill.Source: Courtesy Melbourne Sun, 13 July 1968 Land rights for Aborigines caught the public imagination, especially within the counter-culture, among students and among city-based Aboriginal activists beginning to flex their political muscles. More unusually, religious leaders critical of church hierarchies which had turned a blind eye to the injustices experienced by Aboriginal Australians, public intellectuals and politicians spoke out for land for Aboriginal people. A National Missionary Council pamphlet published in 1963 states unequivocally: It must never be forgotten that, for the most part, Australia was taken from the Aborigines by force without payment or compensation or recognition of their inherent title to the land. [1]

ABC Online Indigenous - Special Topics - Reconciliation Tamworth's NAIDOC celebrations will, for the first time, feature a childrens' community dance. A mixture of elders, community organisations and members of the general community has turned out to discuss the constitutional recognition of indigenous Australians. National Sorry Day has been commemorated in ceremonies and get-togethers across Western Australia. Tenterfield Shire Council has rejected a motion to permanently raise the Aboriginal and New South Wales State Flag outside the Council Chambers. An Aboriginal leader has accused the Port Augusta council of stalling reconciliation in the city by not recognising traditional owners at the start of council meetings. A new report from the Aboriginal and Social Justice Commissioner commends the Aboriginal-led turnaround in Fitzroy Crossing. The Prime Minister says she is committed to closing the gap between the living conditions of Indigenous people and those of other Australians. all Indigenous news

The Wave Hill walk-off: more than a wage dispute - History (6,10) 00:00:10:13REPORTER:Blackfella's country - until recently, few people realised that there might be such a thing. The idea that the Aborigine might own some of the land he discovered 100,000 years ago is one of the rude awakenings for Australians in the 1960s.00:00:24:24MAN:(Plays didgeridoo)00:00:30:23REPORTER:And these are the people who brought about the awakening, the Gurindjis, the remnants of a once-magnificent tribe now dressed like Hollywood extras and set against a background of squalor. The Gurindjis are almost without exception stockmen. They first pricked the national conscience in 1966 when they went on strike at Wave Hill Station, 500 miles south of Darwin. With more than 6,000 square miles of prime cattle country, Wave Hill is one of the largest stations in the world, and it's only one of a dozen or so stations in the Northern Territory owned by the British beef barons Vesteys.

Paul Keating's response to talkback caller over Mabo a reminder of leadership past | Australia news As politicians seek to understand a post-Brexit, post-Trump world, the release of the 1992-93 Australian cabinet documents reminds us that there was a time when a different conversation going on between leaders and voters. The year was 1993 and the Labor government led by Paul Keating had just snatched victory from the jaws of defeat, courtesy of Liberal leader John Hewson’s Fightback! package which proposed a goods and services tax. (And showing we voters are nothing if not contrary, John Howard won the 1998 election calling for a GST.) Keating was trying to resolve a workable framework for native title during the Mabo debate, after the high court repudiated the idea of terra nullius – that Australia was a land that belonged to no one. This came hot on the heels of the 1992 report into 99 Aboriginal deaths in custody in the 1980s. Keating: “We don’t. Caller: “Well you might say that, but all the indications are that you don’t.” Caller: “Not whatsoever. Caller: “Yeah. Keating: “Like what?”