Theconversation. A growing proportion of Australian households depend on the private rental sector for accommodation. 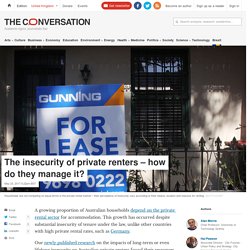 This growth has occurred despite substantial insecurity of tenure under the law, unlike other countries with high private rental rates, such as Germany. Tenants fear eviction for challenging rent, reporting repairs. "Hideous," is how Andrew Gibson describes the half-metre of mould that has been growing on the carpet in his living room for the past year. 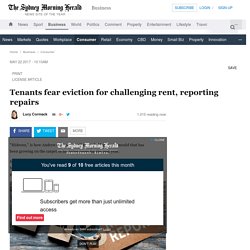 In his kitchen the walls were "coming alive," until the owner installed a quick fix by sanding the mould back and covering it with gyprock walls, leaving a "30mm petri dish for mould to grow. " This is a modal window. This modal can be closed by pressing the Escape key or activating the close button. Caption Settings Dialog Beginning of dialog window. Moonee Ponds auction Rental prices on the rise Supply is tight and rents have continued to rise for the March quarter. Check out excerpts from Domain's live auction coverage. Chapel Hill auction. Warnings Over Impact of Rental Reforms on Family Violence. Controversial rent-bidding app to launch in Australia - Your Mortgage Australia.

Rentberry, a controversial Silicon Valley start-up that allows tenants to bid against each other for rental properties, will launch in Australia this year, amid fears it would jack up rates in Sydney and Melbourne’s already pricey rental markets. 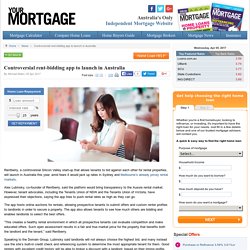 Alex Lubinsky, co-founder of Rentberry, said the platform would bring transparency to the Aussie rental market. However, tenant advocates, including the Tenants Union of NSW and the Tenants Union of Victoria, have expressed their objections, saying the app tries to push rental rates as high as they can go. The app hosts online auctions for rentals, allowing prospective tenants to submit offers and custom renter profiles to landlords in order to secure a property. The app also allows tenants to see how much others are bidding and enables landlords to select the best offers. ‘Startling’ study shows long-term tenants going to extremes to make ends meet. Long-term Sydney and Melbourne renters are twice as likely as anyone else to go to extreme measures to make ends meet, such as pawning items, a paper provided exclusively to Domain reveals. 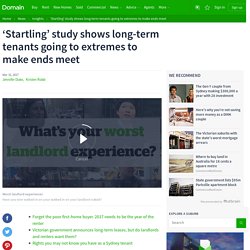 In the past 20 years, the number of tenants renting for 10 or more years has almost doubled in Australia. The rapid growth of this sector led three researchers to undertake a two-year study into an often overlooked part of the housing market. There are fears the launch of a “rent bidding” app will push Aussie rents up even higher. Realestate.com. Tenant Scott has a list of renting horror stories, including living without an oven for a year, despite repeated pleas that it be fixed. 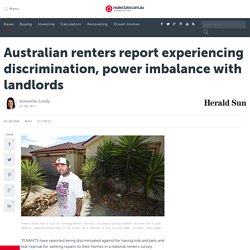 He’s content in his current home. Picture: Tony Gough. The answer to renters’ woes could be as simple as looking at commercial leases, experts say – Domain. The biggest bugbear of renters in Australia is the lack of security, but experts say there’s a simple overlooked answer to the problem – making residential contracts more like commercial leases. 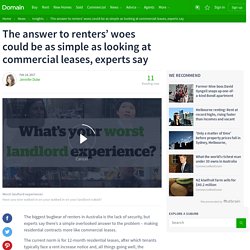 The current norm is for 12-month residential leases, after which tenants typically face a rent increase notice and, all things going well, the opportunity to sign up for another 12 months. But a better arrangement for residential landlords and tenants is commercial-style five-year lease agreements, and the terms that come with those longer rental periods, LJ Hooker head of research Mathew Tiller said. “Long-term leases allow tenants in the commercial space to put their roots down and go about their business. Residential tenants should have the same option,” Mr Tiller said. There could also be “options” in residential contracts that could allow tenants to increase the length of the tenancy after two years of tenancy – something that’s already a feature of commercial leases, he said. Tasmanian rental market tough on single parents, ex-prisoners, pet owners, tenant group says.

Updated Single parents, people with criminal records and pet owners are facing discrimination when it comes to renting in Tasmania, a tenant's advocacy group has said. 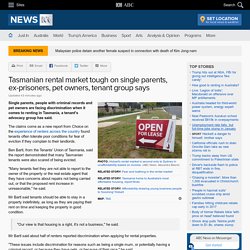 The claims come as a new report from Choice on the experience of renters across the country found tenants often tolerate poor conditions for fear of eviction if they complain to their landlords. Ben Bartl, from the Tenants' Union of Tasmania, said the report demonstrated that many Tasmanian tenants were also scared of being evicted. "Many tenants feel they are not able to report to the owner of the property or the real estate agent that they have concerns about repairs not being carried out, or that the proposed rent increase in unreasonable," he said.

Rental nightmares as tenants, landlords deal with changing real estate landscape – Domain. It wasn’t until Erin Farrar had signed the 12-month rental lease for a house in Epping and moved in that she first noticed raw sewage gushing from a pipe in the yard, quite independent of any drainage system. 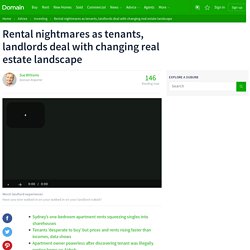 Then she saw the 240-volt wires stapled to the walls inside the house, above the sink. And then the rickety back staircase that looked like it might collapse or splinter at any moment. And then the toilet that didn’t flush… A relaxing bath to soothe her taut nerves wasn’t an option, either. Renters too scared to ask for repairs. Georgie Moore - AAP Fears about potential eviction, blacklisting, and rent hikes are stopping one-in-seven Australian tenants from making complaints about or requesting repairs on rental properties. 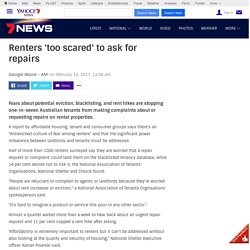 A report by affordable housing, tenant and consumer groups says there's an "entrenched culture of fear among renters" and that the significant power imbalance between landlords and tenants must be addressed. Half of more than 1000 renters surveyed say they are worried that a repair request or complaint could land them on the blacklisted tenancy database, while 14 per cent decide not to risk it, the National Association of Tenants' Organisations, National Shelter and Choice found. "People are reluctant to complain to agents or landlords because they're worried about rent increases or eviction," a National Association of Tenants Orgnisations' spokesperson said. Renters too scared to ask for repairs. Renters have little security, put up with a lot and fear eviction: survey. New survey uncovers widespread fear and anxiety in Australia's private rental market.

At first it was just a bit of mould in the bathroom. 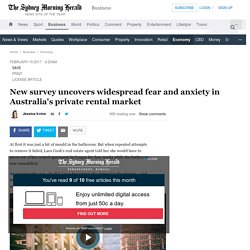 But when repeated attempts to remove it failed, Lara Cook's real estate agent told her she would have to move out of her rented apartment in Coogee for four weeks while the bathroom was remodelled. At considerable cost, she did. Upon her return she stepped in the shower – and the water pipe burst. MOTIONS : Housing Affordability. Senator RHIANNON (New South Wales) (12:32): I, and also on behalf of Senator Cameron, move: That the Senate— (a) notes that: (i) the proportion of Australians leasing in the private rental housing market is the highest in over 50 years,

Is a Lack of Regulation Creating Rental Housing Slums? Indeed, as it turned out, the Port Albert house which Vicky Shields rented out in the Gippsland region of Victoria turned out to be a shocker. Three rooms had holes in either the ceilings or the floor, the floor was constantly damp due to regular flooding, mould was everywhere and the place was infested with rats, had substandard wiring, damaged doors and windows and several appliances which were not in working order.

Yet Shields, who had previously been homeless and has a mental illness, had found nothing else which she could afford. In 2014, the Victorian Civil and Administrative Appeals Tribunal (VCAT) dismissed a case she bought on and ruled that the landlord was under no obligation to bring it up to scratch because the house’s poor condition had been disclosed prior to the commencement of the lease.

Regrettably, Shields is not alone in her experience. Available evidence suggests this story is in fact repeated elsewhere. Why are tenancy rights so poor in Australia? Finder.com.au is one of Australia's leading comparison websites. We compare from a wide set of major banks, insurers and product issuers. finder.com.au has access to track details from the product issuers listed on our sites.

Although we provide information on the products offered by a wide range of issuers, we don't cover every available product. You should consider whether the products featured on our site are appropriate for your needs and seek independent advice if you have any questions. Renters to have more rights under possible changes. Renters could have long-term leases and greater protection under a state government review of Victoria's renting laws.

Possible changes to the Residential Tenancies Act include leases of more than five years, banning rental bids, restricting rent rises to once a year and banning no-pet clauses. Family violence victims may be able to challenge notices to vacate stemming from the perpetrator's behaviour, while eviction notices may need supporting evidence. Tenants could need landlord consent before listing a property on Airbnb or similar sites. Rent or buy? The evidence is in. Renters to have more rights under possible changes. Rising house prices call for an urge to preserve security for renters. Despite predictions earlier last year that house prices would drop making the rental market more tenant friendly, renters continue to face uncertainty surrounding their leases. Rent or buy in Australia? Why you should rent right now.

When should landlords be allowed to evict tenants? “Permanent renters” on the rise—economist - Your Mortgage Australia. By Eleanore D. 3.6 million Australians stuck renting forever. New research reveals many Aussies fear they will never be able to afford to buy a home. Home ownership dream dead for millions: survey. Surging house prices are killing the dream of home ownership for millions of renters, according to a new survey commissioned by comparison website finder.com.au. Daily Telegraph. This Saturday's Letter to the Public from a health inspector struggling to hold bad landlords to account #ukhousing.

Backpackers 'manipulated into staying in expensive substandard housing' to have farm work signed off. Emerging fractional property investment platforms pledge to improve lives of renters. Renters' rights: The forgotten part of the housing debate. Single mother: Our crumbling safety net. Mice, motels and misery: what it's like when a home is out of reach. 'We have to be treated like humans': Court's landmark ruling on rental rights.

Rents are dropping with predictions that they won’t go up for some time. The answer to renters’ woes: A mandatory test for landlords. One in five Victorian tenants offer to pay extra rent, survey reveals. Renting In Australia: One Country, Eight Different Rules. Renting families get the raw end of the stick - here's why. Victorian rental laws under review with landlord repairs under scrutiny. Apartment rents continue to climb in Sydney: Domain Group.