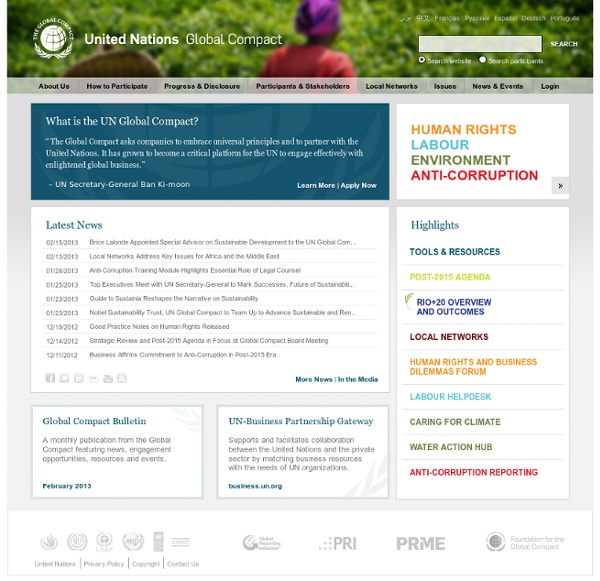 ISO Social Responsibility MAY 2011: ECOLOGIA's Handbook for Implementers of ISO 26000 ECOLOGIA has prepared this 33-page Handbook to meet the needs of small and medium sized businesses, who want to improve their impacts on their communities through developing their corporate social responsibility activities. In Summer 2011, ECOLOGIA will be working with a limited number of businesses in Vermont and in China, using the Handbook. The Handbook includes: overview of the standard and its goals, and what it can offer users workbook, featuring questions, tables to fill out, graphics, charts, real-life examples, and sections such as "Engaging Your Stakeholders: How to Begin the Process" definitions,principles and action suggestions for each of the seven core subjects: Organizational governance Human rights Labor practices Environment Fair operating practices Consumer issues Community involvement and development

Corporate social responsibility The term "corporate social responsibility" became popular in the 1960s and has remained a term used indiscriminately by many to cover legal and moral responsibility more narrowly construed. Proponents argue that corporations increase long term profits by operating with a CSR perspective, while critics argue that CSR distracts from business' economic role. A 2000 study compared existing econometric studies of the relationship between social and financial performance, concluding that the contradictory results of previous studies reporting positive, negative, and neutral financial impact, were due to flawed empirical analysis and claimed when the study is properly specified, CSR has a neutral impact on financial outcomes.[5] Critics[6][7] questioned the "lofty" and sometimes "unrealistic expectations" in CSR.[8] or that CSR is merely window-dressing, or an attempt to pre-empt the role of governments as a watchdog over powerful multinational corporations. Definition[edit] Approaches[edit]

Corporate Social Responsibility (CSR) - Sustainable and responsible business - Enterprise and Industry Corporate social responsibility (CSR) refers to companies taking responsibility for their impact on society. As evidence suggests, CSR is increasingly important to the competitiveness of enterprises. It can bring benefits in terms of risk management, cost savings, access to capital, customer relationships, human resource management, and innovation capacity. European Commission Strategy CSR is defined by the European Commission as "the responsibility of enterprises for their impacts on society" (COM (2011) 681 ).

rporate Social Responsibility does more harm than good The current period of financial turmoil has – as on previous occasions – led to considerable speculation and projection by nervous enterprise leaders, confused politicians and interested advocates as to the correct conduct and purpose of business. The last time this occurred was in response to the economic downturn of the early 1990s. This led, at the time, to the articulation of a presumed need for greater corporate social responsibility – or CSR – as articulated in the 1995 RSA Inquiry, ‘Tomorrow’s Company: the role of business in a changing world’. Notably though, many of the original sponsors and supporters of that endeavour – many of whom appeared to endorse what was to become the New Labour agenda of demanding more targets and procedural audits, as well as greater dialogue and inclusion – are no longer around. But maybe that is because being a good, responsible company that cares about people and the planet, as well a profits, was not what CSR was really about in the first place.

Climate Change Adaptation and Corporate Strategy Corporate Strategy On the boardroom agenda, most organisations will now be discussing issues around environmental impact, climate change adaptation and sustainability. Your business may have strategies and policies in place. There might be posters on the walls charting performance or advertising the next initiative. Corporate social responsibility (CSR) Corporate social responsibility (CSR) promotes a vision of business accountability to a wide range of stakeholders, besides shareholders and investors. Key areas of concern are environmental protection and the wellbeing of employees, the community and civil society in general, both now and in the future. The concept of CSR is underpinned by the idea that corporations can no longer act as isolated economic entities operating in detachment from broader society. Traditional views about competitiveness, survival and profitability are being swept away. Some of the drivers pushing business towards CSR include: 1.

IBM study highlights the commercial benefits of CSR : greentelecomlive A new study by IBM Institute for Business Value finds that corporations can gain a competitive advantage over rivals as well as develop new revenue streams by adopting corporate social responsibility practices. “A growing body of evidence asserts that corporations can do well by doing good,” the authors of the report, George Pohle and Jeff Hittner wrote. “Well-known companies have already proven that they can differentiate their brands and reputations as well as their products and services if they take responsibility for the well-being of the societies and environments in which they operate. These companies are practicing Corporate Social Responsibility (CSR) in a manner that generates significant returns to their businesses.”

What BP could teach you about social media smarts Home » Editor's Comment, Training An interesting new ranking arrived in my in-box Thursday morning grading the most social-savvy FTSE 100 companies. In the top 10 were plenty of brands you’d expect – Marks and Spencer, Burberry, Unilever and Intercontinental Hotels. Also making the cut was Big Oil. Improbably, both BP and Royal Dutch Shell had cracked the top 6 of the FTSE 100 Social Media Index. If you had told me a year ago that BP had cracked anybody’s list of socially committed brands, I’d have asked you how much petrol you’d been sniffing.

4 examples of corporate social responsibility done right Here at Socialbrite, we’re always looking for sterling examples of how the corporate sector is contributing in genuine ways to the social good. Those bridges between the for-profit and nonprofit/social good sectors are becoming increasingly vital. So I was jazzed to see the presentation by Beth Kanter and Kami Huyse of Zoetica yesterday at NewComm Forum in San Mateo, Calif., on what they’re calling “lethal generosity” (a term from Shel Israel’s “Twitterville”). The discussion provided some clarity around the difference between corporate social responsibility, cause marketing and what the Zoetica folks call lethal generosity: “when a corporation applies its core competencies to advance social change in a way that contributes to business results and gives it a competitive advantage.” Molson Coors & responsible drinking 1.Over the years, Molson Coors Canada has used CSR to advance its brand — and is one of the few major corporations to take advantage of social media in doing so.