Martin Hanczyc: The line between life and not-life 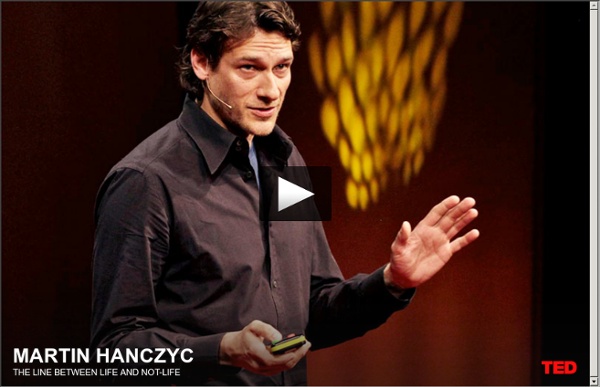 5 Mind-Blowing Projects by College Kids College graduates may still have a tough time finding a decent job in this economy, but some students are trying to make the best use of their time in the classroom. We've rounded up five mind-blowing projects by college kids for your viewing enjoyment. Continue reading to see more. 5. Arcade Game Washing Machine File this under: top 10 student inventions. Principle of double effect The principle of double effect — also known as the rule of double effect; the doctrine of double effect, often abbreviated as DDE or PDE, double-effect reasoning; or simply double effect — is a set of ethical criteria which Christian philosophers, and some others, have advocated for evaluating the permissibility of acting when one's otherwise legitimate act (for example, relieving a terminally ill patient's pain) may also cause an effect one would normally be obliged to avoid (sedation and a slightly shortened life). Double-effect originates in Thomas Aquinas's treatment of homicidal self-defense, in his work Summa Theologiae.[1] This set of criteria states that an action having foreseen harmful effects practically inseparable from the good effect is justifiable if the following are true: Intentional harm versus side effects[edit]

Andrew Hessel at FutureMed Navigation Watch a Brief Day Three Recap More Videos from 2014 Participant Testimonials More Testimonials from 2014 29+ Evidences for Macroevolution: Part 1 Prediction 1.1: The fundamental unity of life According to the theory of common descent, modern living organisms, with all their incredible differences, are the progeny of one single species in the distant past. In spite of the extensive variation of form and function among organisms, several fundamental criteria characterize all life. Some of the macroscopic properties that characterize all of life are (1) replication, (2) heritability (characteristics of descendents are correlated with those of ancestors), (3) catalysis, and (4) energy utilization (metabolism). At a very minimum, these four functions are required to generate a physical historical process that can be described by a phylogenetic tree. If every living species descended from an original species that had these four obligate functions, then all living species today should necessarily have these functions (a somewhat trivial conclusion).

Top 10 Student Inventions You don't have to be a famous researcher or engineer to come up with the next big invention. These ten student projects prove just that. They range from a homemade nuclear reactor to a 300mph electric vehicle. Continue reading to see them all. 10. Spokesless Bicycle Bioethics Forum - The Blog of the Hastings Center Report Journal editor defends retraction of GMO-rats study while authors reveal some of paper's history Retraction Watch "...claiming COPE guidelines somehow supports the decision [to retract] doesn't seem valid." Big Data + Big Pharma = Big Money Charles Ornstein, ProPublica "Need another reminder of how much drugmakers spend to discover what doctors are prescribing? Synthetic Biology Synthetic biology is perhaps the most accelerating science. In fact, since biology became an information technology, for the past several years synthetic biology has been developing even faster than Moore's Law. And just one example - paralel to the pioneering days of computer science, is the explosion in DIY biology garage-based hacker labs.

01.12.2009 - Mice without key enzyme eat without becoming obese, new study finds By Sarah Yang, Media Relations | 12 January 2009 BERKELEY — Researchers at the University of California, Berkeley, have identified a new enzyme that plays a far more important role than expected in controlling the breakdown of fat. In a new study to be published Jan. 11 in the journal Nature Medicine, researchers report that mice that have had this enzyme disabled remained lean despite eating a high-fat diet and losing a hormone that suppresses appetite. "We have discovered a new enzyme within fat cells that is a key regulator of fat metabolism and body weight, making it a promising target in the search for a treatment for human obesity," said Hei Sook Sul, UC Berkeley professor of nutritional sciences and toxicology and principal investigator of the research.

Rare Color Footage of Depression-Era New York In the same year that The Wizard of Oz hurtled Dorothy from a black-and-white Kansas into a Technicolor Oz, Jean Vivier, a French tourist, was filming the streets of New York in all of their own glorious color. A rare 16-mm Kodachrome film from the summer of 1939 that was recently released by the Italian Romano Archives shows swinging signs advertising 5¢ piña coladas, elevated trains whizzing overhead, and boys playing in the fountain of a public park. Archivist Vincente Romano says the clips of Rockefeller Center, Chinatown, and other areas are only a portion of the film Vivier took over the course of his trip from Marseilles to the Big Apple at the close of the Great Depression. Due to its excellent longevity in dark storage, Kodachrome is a favorite of archivists, and much of even the old stuff survives today in everything from home movies to award-winning National Geographic photos. A lot has changed in New York since Jean Vivier first stepped off the S.S. Via the Huffington Post .