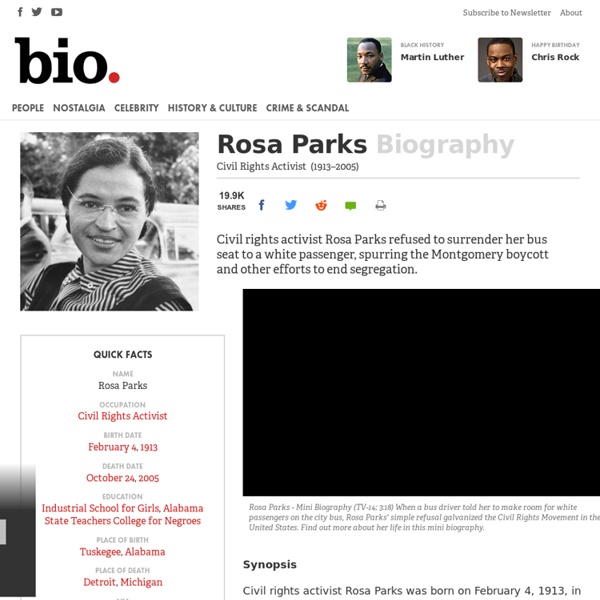 Civil rights activist Rosa Parks refused to surrender her bus seat to a white passenger, spurring the Montgomery boycott and other efforts to end segregation. Synopsis Civil rights activist Rosa Parks was born on February 4, 1913, in Tuskegee, Alabama. Her refusal to surrender her seat to a white passenger on a Montgomery, Alabama bus spurred a city-wide boycott. Civil Rights Pioneer Famed civil rights activist Rosa Parks was born Rosa Louise McCauley on February 4, 1913, in Tuskegee, Alabama. Early Life and Education Rosa Parks's childhood brought her early experiences with racial discrimination and activism for racial equality. Taught to read by her mother at a young age, Rosa went on to attend a segregated, one-room school in Pine Level, Alabama, that often lacked adequate school supplies such as desks. Through the rest of Rosa's education, she attended segregated schools in Montgomery, including the city's Industrial School for Girls (beginning at age 11). Montgomery Bus Boycott Videos

Rosa Parks - Black History On Thursday, December 1, 1955, the 42-year-old Rosa Parks was commuting home from a long day of work at the Montgomery Fair department store by bus. Black residents of Montgomery often avoided municipal buses if possible because they found the Negroes-in-back policy so demeaning. Nonetheless, 70 percent or more riders on a typical day were black, and on this day Rosa Parks was one of them. Segregation was written into law; the front of a Montgomery bus was reserved for white citizens, and the seats behind them for black citizens. Nonetheless, at one point on the route, a white man had no seat because all the seats in the designated “white” section were taken. “People always say that I didn’t give up my seat because I was tired,” wrote Parks in her autobiography, “but that isn’t true. Eventually, two police officers approached the stopped bus, assessed the situation and placed Parks in custody.

Princess Diana Biography “They say it is better to be poor and happy than rich and miserable, but how about a compromise like moderately rich and just moody?” “Helping people in need is a good and essential part of my life, a kind of destiny.” “Everyone needs to be valued. Everyone has the potential to give something back.” “I'd like people to think of me as someone who cares about them.” “[A] voice said to me inside: 'You won't be Queen but you'll have a tough role.'” “No one who knew Diana will ever forget her. “[Th]e higher the media put you, place you, is the bigger the drop.” “[H]ere was a fairy story that everybody wanted to work.” “[W]hen people are dying they're much more open and more vulnerable, and much more real than other people.” “I'd like to be a queen of people's hearts, in people's hearts, but I don't see myself being Queen of this country. “Well, there were three of us in this marriage, so it was a bit crowded.” “[I]f you find someone you love in life you must hang on to it and look after it.”

Muhammad Ali - Boxer, Philanthropist Arguably boxing's most celebrated athlete, Muhammad Ali is also known for his public stance against the Vietnam War and his longtime battle with Parkinson's disease. Synopsis Born Cassius Clay in Louisville, Kentucky, in 1942, Muhammad Ali became an Olympic gold medalist in 1960 and the world heavyweight boxing champion in 1964. Early Life Boxer, philanthropist and social activist Muhammad Ali was born Cassius Marcellus Clay Jr. on January 17, 1942, in Louisville, Kentucky. At the age of 12, Ali discovered his talent for boxing through an odd twist of fate. Ali started working with Martin to learn how to box, and soon began his boxing career. Olympic Gold In 1960, Ali won a spot on the U.S. After his Olympic victory, Ali was heralded as an American hero. Often referring to himself as "the greatest," Ali was not afraid to sing his own praises. Conversion to Islam and Suspension This bold public persona belied what was happening in Ali's personal life, however. The U.S. Boxing Comeback Videos

William Wallace Biography William Wallace, a Scottish knight, became a central early figure in the wars to secure Scottish freedom from the English, becoming one of his country's greatest national heroes. Synopsis Born circa 1270, near Paisley, Renfrew, Scotland, William Wallace was the son of a Scottish landowner. The Rebellion Begins Born around 1270 to a Scottish landowner, William Wallace’s efforts to free Scotland from England’s grasp came just a year after his country initially lost its freedom, when he was 27 years old. In 1296, England’s King Edward I forced Scottish king John de Balliol, already known as a weak king, to abdicate the throne, jailed him, and declared himself ruler of Scotland. The Rebellion Ramps Up On September 11, 1297, an English army confronted Wallace and his men at the Forth River near Stirling. He went on to capture Stirling Castle, and Scotland was briefly nearly free of occupying English forces. Capture and Execution

Isaac Newton - Philosopher, Astronomer, Physicist, Scientist, Mathematician English physicist and mathematician Sir Isaac Newton, most famous for his law of gravitation, was instrumental in the scientific revolution of the 17th century. Synopsis Born on January 4, 1643, in Woolsthorpe, England, Isaac Newton was an established physicist and mathematician, and is credited as one of the great minds of the 17th century Scientific Revolution. With discoveries in optics, motion and mathematics, Newton developed the principles of modern physics. In 1687, he published his most acclaimed work, Philosophiae Naturalis Principia Mathematica (Mathematical Principles of Natural Philosophy), which has been called the single most influential book on physics. Early Life On January 4, 1643, Isaac Newton was born in the hamlet of Woolsthorpe, Lincolnshire, England (using the "old" Julien calendar, Newton's birth date is sometimes displayed as December 25, 1642). At age 12, Newton was reunited with his mother after her second husband died. Professional Life Publishing 'Principia'

Abraham Lincoln | biography - president of United States Life log cabin: Abraham Lincoln’s boyhood homeWettach/Shostal AssociatesLincoln was born in a backwoods cabin 3 miles (5 km) south of Hodgenville, Kentucky, and was taken to a farm in the neighbouring valley of Knob Creek when he was two years old. His earliest memories were of this home and, in particular, of a flash flood that once washed away the corn and pumpkin seeds he had helped his father plant. His father, Thomas Lincoln, was the descendant of a weaver’s apprentice who had migrated from England to Massachusetts in 1637. Though much less prosperous than some of his Lincoln forebears, Thomas was a sturdy pioneer. Childhood and youth Lincoln, Abraham: ChildhoodEncyclopædia Britannica, Inc.In December 1816, faced with a lawsuit challenging the title to his Kentucky farm, Thomas Lincoln moved with his family to southwestern Indiana. His stepmother doubtless encouraged Lincoln’s taste for reading, yet the original source of his desire to learn remains something of a mystery.

Abraham Lincoln Biography Abraham Lincoln was the 16th president of the United States. He preserved the Union during the U.S. Civil War and brought about the emancipation of slaves. Synopsis Abraham Lincoln is regarded as one of America's greatest heroes due to both his incredible impact on the nation and his unique appeal. Childhood Abraham Lincoln was born in a log cabin in Hardin County, Kentucky to Thomas Lincoln and Nancy Hanks Lincoln. When young Abraham was 9 years old, his mother died of tremetol (milk sickness) at age 34. Law Career In March, 1830, the family again migrated, this time to Macon County, Illinois. After the Black Hawk War, Abraham Lincoln began his political career and was elected to the Illinois state legislature, in 1834, as a member of the Whig Party. It was soon after this that he purportedly met and became romantically involved with Anne Rutledge. In 1844, Abraham Lincoln partnered with William Herndon in the practice of law. Advertisement — Continue reading below Entering Politics Videos