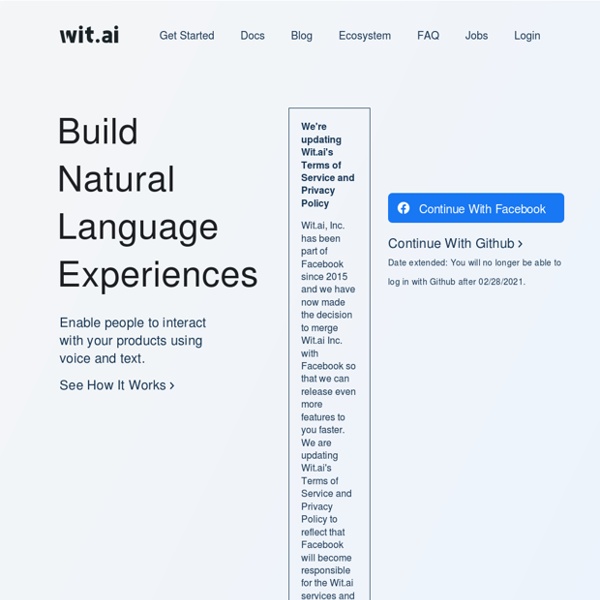 Blender Guru I’m Andrew Price and I run Blender Guru. I’m 27 years old and live in Brisbane, Australia. I started using Blender in 2004, as a hobby but now use it everyday, creating explosions, space ships and other cool stuff as my day job :) The goal of this site is to help you understand Blender, and create amazing results you can be proud of. My Story One night in 2004 I was playing Need For Speed II, and admiring the beauty of the 3d cars. Introducing the Bots Landscape: 170+ companies, $4 billion in funding, thousands of bots I Google search, therefore I bot. Since Facebook announced a bot developer framework and distribution platform in April, the media has been hyperventilating over its impact. I know we’re a big part of this, and I don’t apologize. Bots, as a new (or revisited) paradigm for human-computer interaction, are here, and we’re observing hundreds of companies, billions in funding, and thousands of bots flying in your browsers and messaging apps. Bots are big. You can download the full landscape here, and more rich data is coming soon.

BowPad BowPad BowPad is a small and fast text editor with a ribbon user interface and syntax highlighting. A few notable features of BowPad: syntax highlighting for over 100 file types and languageshandling of many different encodings, including UTF-8, UTF-16 and even UTF-32easy ribbon user interfacenavigation hints in the vertical scrollbarcoloring of open tabs according to their pathextendable with plugins written in JScript or VBScript Converting ICalendar to XML I've started working on a CalDAV implementation, which also requires analysis of ICalendar (rfc 2554) objects. ICalendar objects have properties, components (such as VEVENT, VTODO) and attributes. This is awfully familiar to XML. So instead of trying to come up with a complicated parser and object structure, I decided to just convert it to XML and use PHP's simplexml.

3 Steps to Better UI Wireframes Creating sketches of a user interface, called wireframes, is often the first step in the design phase of a software or web project. Wireframing your software or website project may seem simple at first because of how easy they are to create, but it’s actually a more nuanced (and important) step than it appears. If you’re new to wireframing, or are looking to level up your wireframe game, these steps should help you get the most out of the wireframing stage. An example of a wireframe created with Balsamiq Mockups. Wireframing is to User Interface design as sketching is to drawing.

Design Framework for Chatbots – Chatbots Magazine When I started designing chatbots for BEEVA almost a year ago, I applied some of my UX knowledge and did some unsuccessful research looking for tools that could fit my needs. Actually, I was quite amazed that I couldn’t find practical literature about the topic. There are tons of chatbots out there, but there’s little about how companies really get hands on. I already shared some of my findings here, and here, with tools I found, general knowledge about designing chatbots and UX design applied on chatbots, but I think it would be great to make a deeper explanation about how I exactly face the situation on a regular basis. My Framework

Relaunch64 There's more to the picture than meets the eye - hey hey, my my! Relaunch64 is an IDE (text-editor) for C64 assembler-coding on Windows, Linux and Mac OS X. Relaunch64 has a clean and intuitive user interface, yet it offers many features that make coding faster and easier. Java 7 or higher is required to run Relaunch64. The program is licensed under the GNU GPL 3 (or higher) and free for private and professional use. Intel’s Sharp-Eyed Social Scientist Behind the gray, noise-absorbing cubicle walls at the Intel Corporation in Hillsboro, Ore., researchers who forecast the future of computing can sense her arrival. Reverberating down the hall comes an emphatic Australian voice and the rhythmic thwack-thwack of pointy-heeled boots on carpet. And then, Genevieve Bell, an anthropologist who is Intel’s resident tech intellectual, materializes — auburn-haired, big-ringed, trailing clouds of Chloé perfume. She may still see herself as “just a feral kid from Australia.”