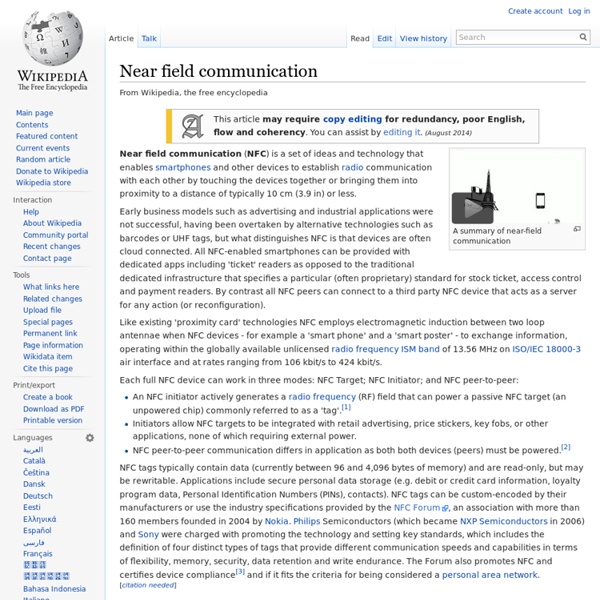 A summary of near-field communication Near field communication (NFC) is a set of ideas and technology that enables smartphones and other devices to establish radio communication with each other by touching the devices together or bringing them into proximity to a distance of typically 10 cm (3.9 in) or less. Early business models such as advertising and industrial applications were not successful, having been overtaken by alternative technologies such as barcodes or UHF tags, but what distinguishes NFC is that devices are often cloud connected. All NFC-enabled smartphones can be provided with dedicated apps including 'ticket' readers as opposed to the traditional dedicated infrastructure that specifies a particular (often proprietary) standard for stock ticket, access control and payment readers. Each full NFC device can work in three modes: NFC Target; NFC Initiator; and NFC peer-to-peer: History[edit] NFC traces its roots back to radio-frequency identification, or RFID. Design[edit]

SMSC - NFC - Forum des services mobiles sans contact - site officiel du SMSC et NFC Latest Launch Brings China Closer to ‘GPS’ Of Its Own | Danger Room At 5:30 on Sunday morning, the Chinese government fired a Long March 3A rocket into orbit. It carried a navigation satellite — the fifth in a planned constellation of 30 or more Beidou orbiters that Beijing hopes will soon rival America’s Global Positioning System. For years, the U.S. Air Force has owned and operated the system that the rest of the world uses to find its way home, synch its financial transactions (thanks to the GPS timing service), and bring its ships to port. Enter Beidou (“Compass”), China’s GPS alternative. Sunday’s satellite makes the fifth orbiter in the Beidou constellation, and the third launched this year. Which means China can get its own satellite-guided weapons — ones that hit within feet of their target, and stay on track in any weather. “GPS has become so embedded in much of the world’s day-to-day commerce and activities, it is very unlikely that the U.S. would ever turn off the precision signal. In 2008, Moscow opened up GLONASS access to civilians.

the free encyclopedia Association Française du Sans Contact Mobile RFID Experimenters Kit RFID is an exciting new technology that is finding its way into a variety of different industries; pet identification, keyless entry, hospitals, inventory management and tracking, tollway collections, security, data collection, wildlife tracking, and much more. Now you can experiment on your own with this great starter kit. This kit includes everything needed to get started: The RedBee RFID Reader is a ground breaking first in many areas. Capable of being used as a tethered device to a PC or microcontrollers OR as a preprogrammed stand alone device it is the only hobby reader with both. The RedBee comes default with USB and TTL serial with the ability to add Xbee for wireless communitcation. RFID LoginA computer is the heart of any true tech geek lair. RFID DeadboltKeys are so 1800s man! RFID SafeNeed to hide your secret files or retrieve your pocket spy camera in a hurry? RFID RacersA great weekend project for parent and child or party entertainment for any age.

Careers and Jobs UK – UK Jobs Search and Recruitment List of NFC phones This is an exhaustive, comprehensive and accurate list of all the handsets that are available around the world. NFC World’s NFC phones list is mirrored all over the web but since it is a living document you should check this page for the latest information. NFC phones available today… Phones available to purchase today: Acer Cloud Mobile The Acer Cloud Mobile is a sleek, black Android touchscreen handset with a business-like design and a 4.3-inch screen, 1.5GHz dual-core processor and NFC. Acer E320 Liquid Express The Acer E320 Liquid Express is an entry-level Android smartphone and is the Taiwanese manufacturer’s first NFC handset. Acer Liquid Glow The Acer Liquid Glow is an Android 4 smartphone with a 3.7-inch screen and a 5-megapixel camera, and became available from Q2 2012. Adlink IMX-2000 The Adlink IMX-2000 is an “industrial mobile handheld device” aimed at automatic identification and data capture applications that includes NFC and a 1D laser or 2D camera-based barcode scanner.

Hands On When I open my front door, I don't reach for a key. When I log into my computer, I don't touch my keyboard. When I start my motorcycle, again, no key needed. I was one of the first do-it-yourselfers to have a radio-frequency identification (RFID) tag implanted under my skin. So what's a nice guy like me doing with a microchip in each of my hands? That bulky key ring got me thinking. I considered biometric authorization, in which access is granted only if a scanned physiological trait, such as a fingerprint or the pattern of an iris, matches a pattern stored in a database. Two weeks later, I was sitting in a doctor's office. In an RFID ”lock ” system, each RFID tag, which is essentially a minitransmitter, sends out a sequence of radio-frequency pulses representing a unique number, usually 10 to 16 digits in length. Now, if the tag is implanted in your body, I reasoned, so much the better: it's impossible not to have it when you need it.