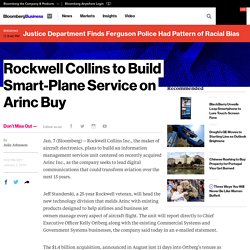 Jeff Standerski, a 25-year Rockwell veteran, will head the new technology division that melds Arinc with existing products designed to help airlines and business jet owners manage every aspect of aircraft flight. The unit will report directly to Chief Executive Officer Kelly Ortberg along with the existing Commercial Systems and Government Systems businesses, the company said today in an e-mailed statement. 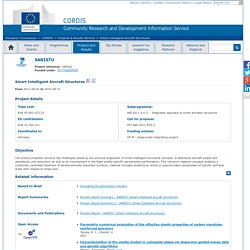 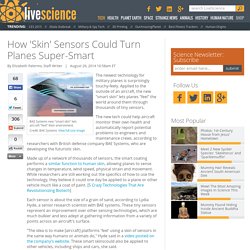 Applied to the outside of an aircraft, the new "smart skin" lets planes "feel" the world around them through thousands of tiny sensors. The new tech could help aircraft monitor their own health and automatically report potential problems to engineers and maintenance crews, according to researchers with British defense company BAE Systems, who are developing the futuristic skin. Made up of a network of thousands of sensors, the smart coating performs a similar function to human skin, allowing planes to sense changes in temperature, wind speed, physical strain and movement. While researchers are still working out the specifics of how to use the technology, they believe it could one day be applied to a plane or other vehicle much like a coat of paint. [5 Crazy Technologies That Are Revolutionizing Biotech] This sensor technology could one day be incorporated into a broad range of commercial products, according to Hyde.

Smart Intelligent Aircraft Structures. The term “smart structures” is commonly used for structures which have the ability to adapt to environmental conditions according to the design requirements. 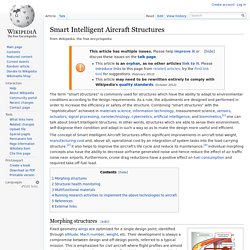 As a rule, the adjustments are designed and performed in order to increase the efficiency or safety of the structure. Combining “smart structures” with the “sophistication” achieved in materials science, information technology, measurement science, sensors, actuators, signal processing, nanotechnology, cybernetics, artificial intelligence, and biomimetics,[1] one can talk about Smart Intelligent Structures. In other words, structures which are able to sense their environment, self-diagnose their condition and adapt in such a way so as to make the design more useful and efficient. Morphing structures[edit] Fixed geometry wings are optimized for a single design point, identified through altitude, Mach number, weight, etc.

Structural health monitoring[edit] Multifunctional materials[edit] References[edit] External links[edit] Aircraft set to become more human as engineers develop smart skins which can detect injury. Work is underway at BAE Systems to give aircraft human-like ‘skin’, enabling the detection of injury or damage and the ability to ‘feel’ the world around them. 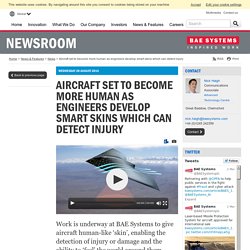 Engineers at our Advanced Technology Centre are investigating a ‘smart skin’ concept which could be embedded with tens of thousands of micro-sensors. When applied to an aircraft, this will enable it to sense wind speed, temperature, physical strain and movement, far more accurately than current sensor technology allows. The revolutionary ‘smart skin’ concept will enable aircraft to continually monitor their health, reporting back on potential problems before they become significant. This would reduce the need for regular check-ups on the ground and parts could be replaced in a timely manner, increasing the efficiency of aircraft maintenance, the availability of the plane and improving safety.

These tiny sensors or ‘motes’ can be as small as grains of rice and even as small as dust particles at less than 1mm squared.