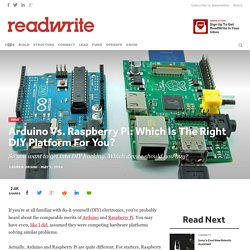 You may have even, like I did, assumed they were competing hardware platforms solving similar problems. Actually, Arduino and Raspberry Pi are quite different. For starters, Raspberry Pi is a fully functional computer, while Arduino is a microcontroller, which is just a single component of a computer. Here’s a primer to differentiating Arduino and Raspberry Pi, and to determining which of the two DIY hacking devices best fits your needs as a maker. Overview Raspberry Pi and Arduino were both originally designed to be teaching tools, which is why they’ve become so popular—both devices are very easy to learn to use. See also: 12 Cool Projects For Your Raspberry Pi Raspberry Pi hails from the United Kingdom. Arduino, on the other hand, was born in Italy.

Raspberry Pi Interfacing made easy. Introducing RasPiO<sup>®</sup> The day has finally arrived for me to launch my first three products in the RasPiO® range. 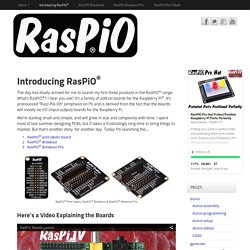 What’s RasPiO®? I hear you ask? It’s a family of add-on boards for the Raspberry Pi®. It’s pronounced “Razz-Pie-Oh” (emphasis on Pi) and is derived from the fact that the boards will mostly be I/O (input-output) boards for the Raspberry Pi. We’re starting small and simple, and will grow in size and complexity with time. RasPiO® Port labels, RasPiO® Breakout & RasPiO® Breakout Pro Here’s a Video Explaining the Boards What are they? RasPiO® port labels board A simple port labels board with large, clear labels, with GPIO numbers on one side and Alt functions on the other. RasPiO® Breakout A Breakout board with large, clear labels, that breaks out each port twice, giving you the opportunity to connect either male or female wires to any port.

Arduino and Raspberry Pi Serial Communication. Today’s the last day of my summer holiday, and I had some free time on my hands. 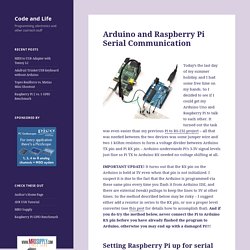 So I decided to see if I could get my Arduino Uno and Raspberry Pi to talk to each other. It turned out the task was even easier than my previous Pi to RS-232 project – all that was needed between the two devices was some jumper wire and two 1 kOhm resistors to form a voltage divider between Arduino TX pin and Pi RX pin – Arduino understands Pi’s 3.3V signal levels just fine so Pi TX to Arduino RX needed no voltage shifting at all. IMPORTANT UPDATE! It turns out that the RX pin on the Arduino is held at 5V even when that pin is not initialized. I suspect it is due to the fact that the Arduino is programmed via these same pins every time you flash it from Arduino IDE, and there are external (weak) pullups to keep the lines to 5V at other times. Liam Jackson: Arduino and Raspberry Pi - Talking over UART Serial. What are the raspberry Pi and arduino? 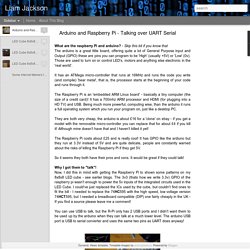 - Skip this bit if you know that The arduino is a great little board, offering quite a lot of General Purpose input and Output (GPIO) these are pins you can program to be 'High' (usually +5V) or 'Low' (0v). Those are used to turn on or control LED's, motors and anything else electronic in the 'real world'.

It has an ATMega micro-controller that runs at 16MHz and runs the code you write (and compile) 'bear metal', that is, the processor starts at the beginning of your code and runs through it. The Raspberry Pi is an 'embedded ARM Linux board' - basically a tiny computer (the size of a credit card)! They are both very cheap, the arduino is about £16 for a 'clone' on ebay - if you get a model with the removable micro-controller you can replace that for about £4 if you kill it! Raspberry Pi master controls Arduino UNO slaves via I2C. #// Arduino I2C Wire master version 0.2 #// Turns the Raspberry Pi into a I2C master device using I2C-tools. #// send commands to the I2C Arduino slave for configuring pins, #// read and write to pins via a simple instruction set. #// the i2c-tools are required use "sudo apt-get install i2c-tools" #// the I2C slave software must be installed on the Arduino #// Supported instructions #// pinMode = setPin(device, pinnumber, INPUT/OUTPUT/INPUT_PULLUP) #// digitalWrite = writePin(device,pinnumber,HIGH/LOW) #// analogWrite (=PWM) = analogWritePin(device,pinnumber,0-255) #// digital/analog read = getStatus(device) reads all the digital/analog pins #// digital/analog read = pinValue gets the value for a single pin. 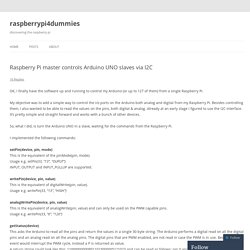 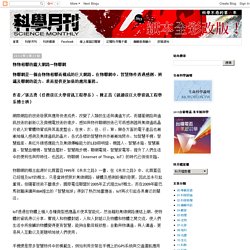