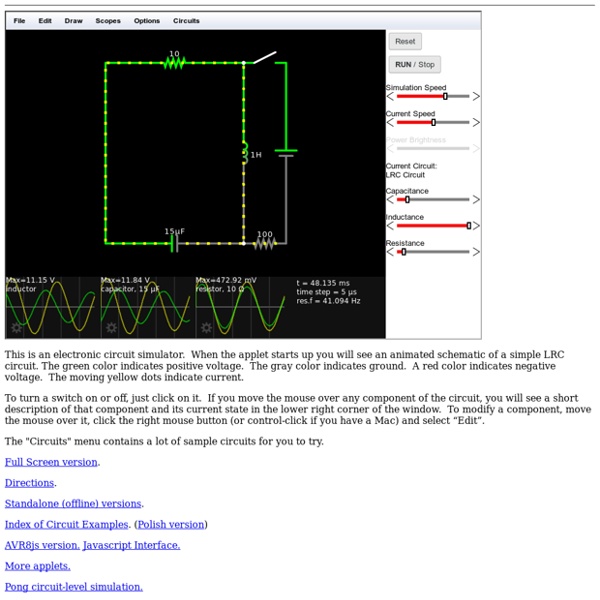 This is an electronic circuit simulator. When the applet starts up you will see an animated schematic of a simple LRC circuit. The green color indicates positive voltage. The gray color indicates ground. A red color indicates negative voltage. The moving yellow dots indicate current. To turn a switch on or off, just click on it. The "Circuits" menu contains a lot of sample circuits for you to try. Full Screen version. Directions. Standalone (offline) versions. Index of Circuit Examples. More applets. Javascript version. Report a problem/feature request Huge thanks to Iain Sharp for the Javascript port. java@falstad.com

Converting HP ProLiant Power Supplies for Amateur Radio Use Converting HP ProLiant Power Supplies for Amateur Radio Use Robert Kilian, K6RBK k6rbk@ostechnologies.net SPICE Simulation Community - YouSpice Welcome to the SPICE Simulation Community Welcome to the SPICE community for electronics design and simulation. Register and start now to download free SPICE projects, sale or share your simulated projects. READ MORE or click on the slide image to watch a 5 minute video tour. Harvard cracks DNA storage, crams 700 terabytes of data into a single gram A bioengineer and geneticist at Harvard’s Wyss Institute have successfully stored 5.5 petabits of data — around 700 terabytes — in a single gram of DNA, smashing the previous DNA data density record by a thousand times. The work, carried out by George Church and Sri Kosuri, basically treats DNA as just another digital storage device. Instead of binary data being encoded as magnetic regions on a hard drive platter, strands of DNA that store 96 bits are synthesized, with each of the bases (TGAC) representing a binary value (T and G = 1, A and C = 0). To read the data stored in DNA, you simply sequence it — just as if you were sequencing the human genome — and convert each of the TGAC bases back into binary. To aid with sequencing, each strand of DNA has a 19-bit address block at the start (the red bits in the image below) — so a whole vat of DNA can be sequenced out of order, and then sorted into usable data using the addresses.

OpenBuildings Designer for DEC On the Architectural tab, select Object, then Select Curtain wallSet the parameters: Sense Distance: 300, Dimensions/CWWidth: 4500, Server Power Supply Interface Board - for standalone miners and GPU rigs First "complete" prototype finished and undergoing testing; as soon as a reliable source of parts can be found I'll start on actual production. If anyone's got an "in" with Molex or FCI I wouldn't mind a bit of assistance tracking down both parts and information. This board is designed to mate with a Dell Z750P power supply from a PowerEdge 2950; said supplies can be found fairly readily on eBay in various conditions for as low as $12. They are rated to provide 62A at 12V at 90% efficiency. This interface board provides - Screw terminals for +12V and GND so you only hook up what cables you need. - Additional output capacitance for voltage ripple and burst current buffering - Manual fan speed control (the stock full speed is quite loud) - Auto-powerup which can be triggered by an external signal as low as 3V, disablable by a toggle switch - Manual powerup from a toggle switch.

Arduino Simulation with Proteus - YouSpice, SPICE simulation community We 'll show how to simulate the celebrated open-source electronics prototyping platform Arduino with Proteus .You can find other informations, project files and arduino software at its homepage. Let 's run ISIS Schematic: To simulate the core of Arduino platform we need only a few components: the atmega328P Microcontroller, a Crystal and two Capacitors.Let' s look for these devices in the library: Click on "P" button and write atmega as keyword: V Motion Project – Part I: The Instrument Overview The Motion Project was a collaboration between a lot of clever creative people working together to create a machine that turns motion into music. The client for the project, Frucor (makers of V energy drink), together with their agency Colenso BBDO, kitted-out a warehouse space for this project to grow in and gathered together a group of talented people from a number of creative fields. Producer Joel Little (Kids of 88, Goodnight Nurse) created the music, musician/tech wiz James Hayday broke the track down and wrestled it into Ableton, and Paul Sanderson of Fugitive built the tech to control the music with the help of Mike Delucchi. I also helped with the music side of the tech and built the visuals software with motion graphics warlocks Matt von Trott and Jonny Kofoed of Assembly. Assembly also produced and directed the music video.

Ranked: The 100 Most Spoken Languages Worldwide Even though you’re reading this article in English, there’s a good chance it might not be your mother tongue. Of the billion-strong English speakers in the world, only 33% consider it their native language. The popularity of a language depends greatly on utility and geographic location. Additionally, how we measure the spread of world languages can vary greatly depending on whether you look at total speakers or native speakers. Today’s detailed visualization from WordTips illustrates the 100 most spoken languages in the world, the number of native speakers for each language, and the origin tree that each language has branched out from. How Do You Define A Language?