Tracking the Internet of Things 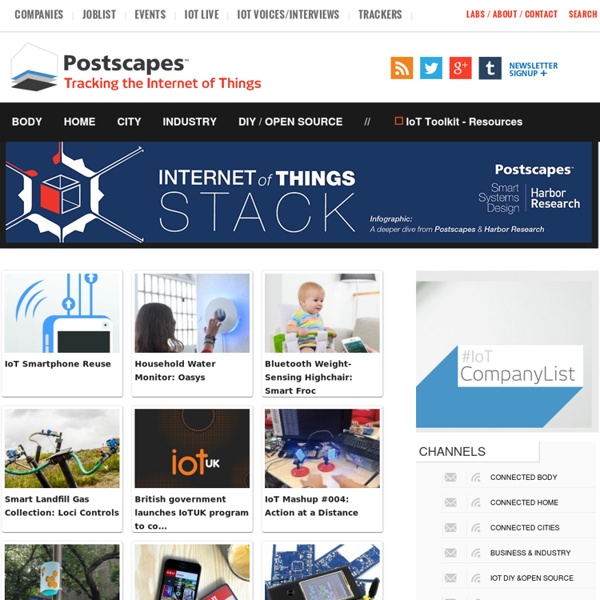 Stop Puppy Whining, Crying, Whinging or Screaming Fast! How To Stop Dog Whining So you've got a whinging, whiny little puppy or older dog - it's got to be one of the most annoying and frustrating sounds of all doesn't it? Firstly I should say that this whining is a perfectly natural behavior for a young puppy - it is how they get attention from their mother from a very early age. It's when the whining or crying drags on and on and becomes a long term persistent habit that it becomes a problem for us dog lovers. Open Smart Cities I: Open Source Internet of Things - Open Smart Cities I: Open Source Internet of Th... "Open Smart Cities I" is the first post of a series of three that address, from the point of view of open source software, several technological areas related to Smart Cities, as the Internet of Things, Cloud, Big Data, or Smart Cities platform of services and applications. In this post, we make a brief review of the concept of Smart City, and introduce the topic of Internet of Things, wherein we explore the potential of open source technologies (software, hardware and standar). Read this post in Spanish

RasPi IoT Development Kit: ThingBox- Postscapes ThingBox, from the folks at FunDaTrix (itself the consumer-oriented arm of French software company Digital Airways), is a free and open-source project designed to let casual coders easily create programs for the Internet of Things. All you need is a Raspberry Pi and a little bit of technical know-how (but much, much less than a professional developer). “The Thingbox provides a ready-to-use, ‘all in one’ IoT software package that can be used by non-developers,” explained Digital Airways co-founder Nicolas Silberzahn in an email to Postscapes. The software includes the MQTT protocol for letting devices talk to one another and an HTTP server platform built on Node.js -- though the target user shouldn’t need to know much, if anything, about that.

Mapping Stereotypes Get your copy on: Amazon US / Amazon UK / Amazon DE / Amazon FR / Amazon IT / Amazon ES / Amazon Canada / Amazon Japan / Amazon India / Amazon Brazil Atlas of Prejudice: The Complete Stereotype Map Collection Reducing Reactivity in Dogs - The Pawfectionist Dogs react to many different things for many different reasons. The most common one I am faced with is dogs that are fearfully reactive to other dogs. Owners have tried socialising the dog with other dogs, keeping away from other dogs at all costs, telling the dog off, rewarding the dog and everything in between to help fix this problem without success.

Twine : Listen to your world, talk to the Internet by Supermechanical The Kickstarter is over, but if you missed out on backing us, not to worry. You can still join the thousands of other awesome Twine owners by pre-ordering on Supermechanical. It's the next best thing to being an original backer! Follow us on Facebook or Twitter. Want to hook up things to the Web? Maybe you want to get a tweet when your laundry's done, or get an email when the basement floods while you're on vacation.

System Overview — SiteWhere 0.9.6 documentation This guide is intended to provide a high-level understanding of what SiteWhere does and how it is implemented. What is SiteWhere? SiteWhere is an open source M2M integration platform – a system that choreographs data coming from and going to a web of connected devices. It provides the following functionality: Supplies a server based on proven technologies that acts as a controller for the processing of device data.

all about visual art Desktop Calendar – January 2014 2014 begins and we are starting the fourth round of our desktop calendar series. We are looking forward to a successful New Year and wish you all the best. If you want this wallpaper at your desktop feel free to download in different resolutions or tell us if you need something else. [...] Dezember 31, 2013Toni PolkowskiDesign, Photography, Wallpaper

How To Crack A Wi-Fi Network's WPA Password With Reaver Your Wi-Fi network is your convenient wireless gateway to the internet, and since you’re not keen on sharing your connection with any old hooligan who happens to be walking past your home, you secure your network with a password, right? Knowing, as you might, how easy it is to crack a WEP password, you probably secure your network using the more bulletproof WPA security protocol. Here’s the bad news: A new, free, open-source tool called Reaver exploits a security hole in wireless routers and can crack most routers’ current passwords with relative ease. Here’s how to crack a WPA or WPA2 password, step by step, with Reaver — and how to protect your network against Reaver attacks. In the first section of this post, I’ll walk through the steps required to crack a WPA password using Reaver.

With iBeacon, Apple is going to dump on NFC and embrace the internet of things At WWDC in June, Apple quietly announced iBeacon, one of the more prominent features of iOS 7. Craig Federighi, Apple’s senior vice president of Software Engineering, mentioned nothing about about it in the keynote, and Apple hasn’t provided any details about it; it was only seen on one slide in the WWDC keynote. Nor did Apple say anything about it during the iPhone event Tuesday. But I’m sure this is going to be a big deal, and startup companies like Estimote agree, announcing its support for Apple’s technology Tuesday and releasing this demonstration video.