Are you ready for the Internet of Things? 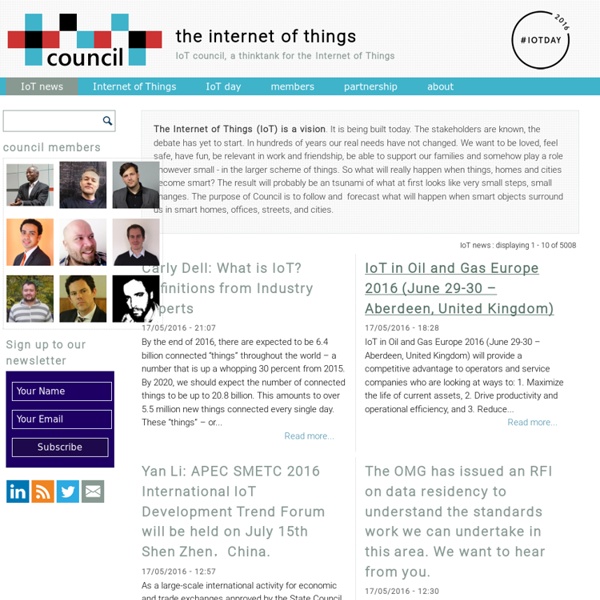 The Internet of Things (IoT) is a vision. It is being built today. The stakeholders are known, the debate has yet to start. In hundreds of years our real needs have not changed. We want to be loved, feel safe, have fun, be relevant in work and friendship, be able to support our families and somehow play a role - however small - in the larger scheme of things. So what will really happen when things, homes and cities become smart?

Art and the Internet of Things Wireless is increasingly pulling in all kinds of applications, platforms, services and things (rfid) into networks. Many people communicate through mobiles, blackberries, digital organizers, palmtops. Cars become information spaces with navigational systems and consoles like Nintendo DS have wireless capacities and get linux kernels installed.We are witnessing a move towards pervasive computing and disappearing technologies in intelligent clothing (wearables), smart environments (knowing where and who we are), pervasive games, and we will see doors opening for some and closing to others. Mimickry and camouflage will become part of application design.

Internet of Things The Internet of Things (IoT) is the network of physical objects or "things" embedded with electronics, software, sensors and connectivity to enable it to achieve greater value and service by exchanging data with the manufacturer, operator and/or other connected devices. Each thing is uniquely identifiable through its embedded computing system but is able to interoperate within the existing Internet infrastructure. The term “Internet of Things” was first documented by a British visionary, Kevin Ashton, in 1999.[1] Typically, IoT is expected to offer advanced connectivity of devices, systems, and services that goes beyond machine-to-machine communications (M2M) and covers a variety of protocols, domains, and applications.[2] The interconnection of these embedded devices (including smart objects), is expected to usher in automation in nearly all fields, while also enabling advanced applications like a Smart Grid.[3]

The Internet of Things and Education With the Internet connecting us to many things (media, photos, information, etc.) can it also connect us to physical objects? Can we launch applications on our computer by just touching a physical object? Can one physical object talk to another physical object through an Internet connect and command it to do a physical act or feed it data? The answer is yes and this phenomena is called “The Internet of Things”. What is exactly the Internet of Things? What is the internet of things? Among its many other cultural and economic assets, Google is accumulating a rather comprehensive record of what is troubling us, from asking the search engine to diagnose our disease symptoms to whether we will ever find true love. It seems only natural, then, to turn to Google to decrypt the latest piece of technical jargon, “the internet of things”. It is a term that internet users have been peppering the search engine with questions about. But what does it mean for real life? We’ve taken the most commonly asked questions about the internet of things, and answered them using a real human being.

Radio-frequency identification Radio-frequency identification (RFID) is the wireless use of electromagnetic fields to transfer data, for the purposes of automatically identifying and tracking tags attached to objects. The tags contain electronically stored information. Some tags are powered by electromagnetic induction from magnetic fields produced near the reader. Some types collect energy from the interrogating radio waves and act as a passive transponder. Other types have a local power source such as a battery and may operate at hundreds of meters from the reader. Internet of Things - Privacy and Security in a Connected World The Federal Trade Commission held a public workshop to explore consumer privacy and security issues posed by the growing connectivity of devices. The ability of everyday devices to communicate with each other and with people is becoming more prevalent and often is referred to as “The Internet of Things.” Connected devices can communicate with consumers, transmit data back to companies, and compile data for third parties such as researchers, health care providers, or even other consumers, who can measure how their product usage compares with that of their neighbors. The workshop brought together academics, business and industry representatives, and consumer advocacy groups to explore the security and privacy issues in this changing world. The workshop served to inform the Commission about the developments in this area.

Four ways to get the IoT moving Barely a week goes by before another report declares the incredible impact of the Internet of Things (IoT), whether it’s in terms of billions of connected devices, the savings governments will make or the money that companies could make - at some point in the future.The ability to interconnect things that have some semblance of intelligence could lead to more efficient production, healthcare and transport. Levent Gürgen, an R&D project manager at French engineering research institute CEA, describes how cameras in cars or smartphones could report a defective manhole in the street, setting systems into action that organise not only repairs but automated signs to create a detour around the problem. And not just a single fixed detour, but one that adapts to congestion based on the movement data of the vehicles themselves, diverting them along different roads. The key is getting data to where it needs to be to make the system work. There are serious technical issues involved. 1.