Data integration at scale: Creating webs of data with RDF. Develop and deploy your nextapp on the IBM Bluemixcloud platform. 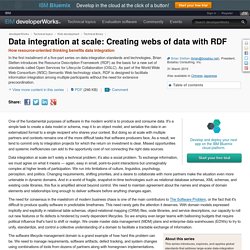 Start your free trial One of the fundamental purposes of software in the modern world is to produce and consume data. It's a simple task to create a data model or schema, map it to an object model, and serialize the data in an externalized format to a single recipient who shares your context. But doing so at scale with multiple partners and contexts remains one of the more difficult tasks that software producers face.

As a result, we tend to commit only to integration projects for which the return on investment is clear. Data integration at scale isn't solely a technical problem; it's also a social problem. Turn a Raspberry Pi Into an XBMC Media Centre in Under 30 Minutes. The best home cinema PCs are small, quiet, and inexpensive—so the bite-size, £25 Raspberry Pi is the perfect choice. 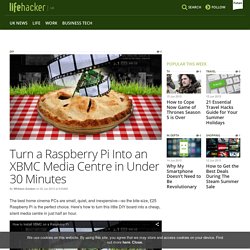 Here's how to turn this little DIY board into a cheap, silent media centre in just half an hour. Check out the video above for a quick demo of what the project entails, and what you'll get at the end. Music in the video by Revolution Void. It's Raspberry Pi week at Lifehacker, and all week we'll be showing you some cool DIY projects you can put together with this little miracle of a device. If you haven't bought one yet, check out our introduction to the Pi to learn more about what it is, what you'll need, and the cool stuff you can do with one. Judd Treat Machine - NYC CNC Machining, Fabrication & Prototype Instructional Videos. Scott Made This. Description The BeetBox is a simple instrument that allows users to play drum beats by touching actual beets. 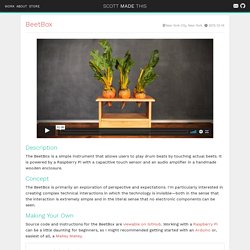 It is powered by a Raspberry Pi with a capacitive touch sensor and an audio amplifier in a handmade wooden enclosure. Concept The BeetBox is primarily an exploration of perspective and expectations. I’m particularly interested in creating complex technical interactions in which the technology is invisible—both in the sense that the interaction is extremely simple and in the literal sense that no electronic components can be seen. Enclosure The enclosure was created from .5″x8″ poplar boards, which I cut to size and finished using various hand and power tools. Internals Touch sensing is handled by an MPR121 Capacitive Touch Sensor from SparkFun, for which I ported existing Arduino code to Python. Making Your Own Source code and instructions for the BeetBox are viewable on GitHub. Images Thanks Related Projects. Raspberry Pi Synthesizer. Raspberry Pi PirateBox. A PirateBox is a Linux based system built using free software for the Raspberry Pi that provides private sharing of digital content. 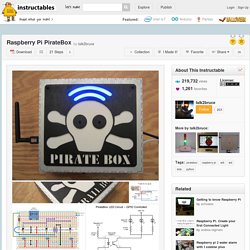 The PirateBox creates a local WiFi network, independent from the Internet, with anonymous file sharing and chatting capabilities. I wanted to make a PirateBox and create a cool looking case for it. Introducing the Dramble - Raspberry Pi 2 cluster running Drupal 8. Version 0.9.3 of the Dramble—running Drupal 8 on 6 Raspberry Pis I've been tinkering with computers since I was a kid, but in the past ten or so years, mainstream computing has become more and more locked down, enclosed, lightweight, and, well, polished. 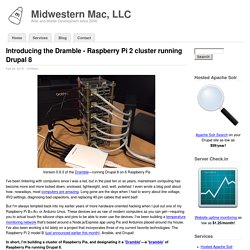 I even wrote a blog post about how, nowadays, most computers are amazing. Long gone are the days when I had to worry about line voltage, IRQ settings, diagnosing bad capacitors, and replacing 40-pin cables that went bad! But I'm always tempted back into my earlier years of more hardware-oriented hacking when I pull out one of my Raspberry Pi B+/A+ or Arduino Unos.

These devices are as raw of modern computers as you can get—requiring you to actual touch the silicone chips and pins to be able to even use the devices. Welcome to the Pi In The Sky Project - Pi In The Sky Project. Raspberry Pi Temperature & Humidity Network Monitor. Please note that there's a Git repo for code at: If you'd like the latest fixes or would like to contribute. 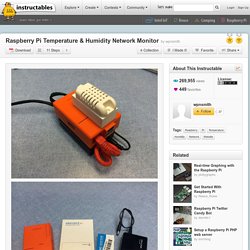 Thanks Jonny Ervine! I had some issues with Kingston SD Cards, but the SanDisk cards I'm using now have run for weeks without issues, so I'm changing the parts list to reflect that. Also, after some 49 days, 16 hours, the display flatlines, as the reading routines start returning the same number over and over again. A reboot clears it, so just reboot once a month until I figure out what's up. Raspberry Pi Web Server. Introducing the Dramble – Raspberry Pi 2 cluster running Drupal 8 #piday #raspberrypi @Raspberry_Pi. 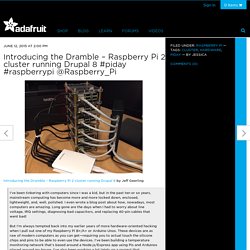 I even wrote a blog post about how, nowadays, most computers are amazing. Long gone are the days when I had to worry about line voltage, IRQ settings, diagnosing bad capacitors, and replacing 40-pin cables that went bad! Read more. Each Friday is PiDay here at Adafruit! No comments yet. Adafruit has a "be excellent to each other" comment policy. Wireless Temperature Sensor Project - PrivateEyePi Project. Software Now that you have your electronics built we can work on the software. 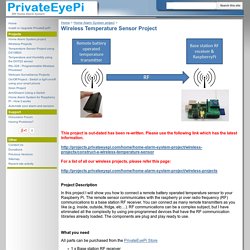 Boot up your Raspberry Pi and navigate to the home directory from the command prompt. Download the rftherm.zip software by typing the following commends: At the command prompt type: Code: cd /home sudo wget -N www.privateeyepi.com/downloads/rftherm.zip The unzip command will look something like figure 3 where the three source code files are uncompressed and copied into the /home directory. Temperature and Humidity using the DHT22 sensor - PrivateEyePi Project.

This tutorial you will build one or more digital temperature gauges linked to your Raspberry Pi that can be viewed on the WWW or your smart phone. 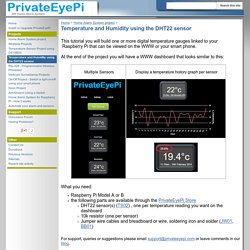