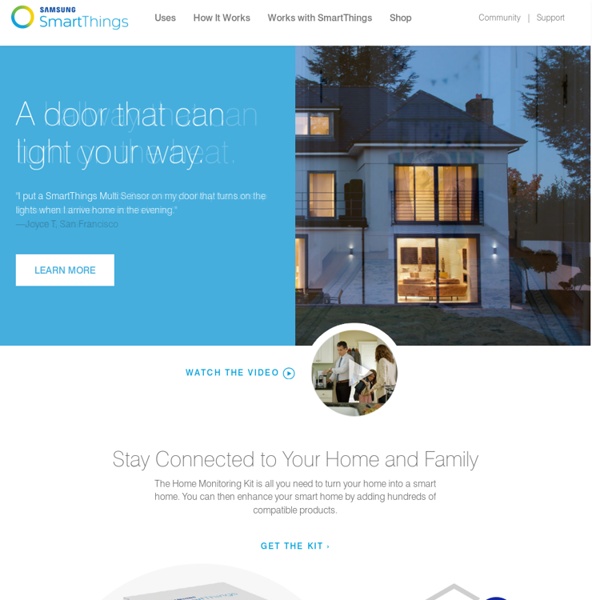 Hello, Smart Home You spend a lot of time with your home. Isn’t it time it got to know you? Watch the Video Discover See a few of the ways that SmartThings can offer greater home security, peace of mind, and more in your home.

Occipital Raises $1M (And Counting) On Kickstarter To Bring 3D Scanning To The Masses Boulder & SF-based startup Occipital is probably still best known for its Red Laser and 360Panorama apps, but it confirmed today that it raised over $1 million on Kickstarter to bring its Structure 3D sensor to market. The Structure isn’t just any 3D sensor though. It’s an incredibly small one — so small, in fact, that it can onto the back of your iPad (note: it’s compatible with any iOS device with a Lightning port) and connect without completely killing your battery life. While run-of-the-mill users can use the Structure and its early batch of companion apps to scan objects for printing at Shapeways or to fling balls for virtual kittens to chase around the 3D representation of a room, Occipital was really gunning to pick up developer support this time. It’s certainly a nice little show of financial validation for the team, especially considering this is their first big foray into consumer-facing hardware and the fact that they didn’t exactly need the cash in the first place.

Spring Security,Spring Security Tutorial,Spring Security Authentication,Spring Security Download, Spring Security Example Code, Security Spring example Spring Security Tutorial, Acegi Implementation 0inShare Acegi is the most used web project security tools in respect of Java web development. Acegi is a security framework for authentication, authorization and role based authorization of the users. Spring Security is an implementation of Acegi referral API. Tips for the One iPad Classroom, and a Free iPad Rules Download! Do you have an iPad in your classroom? Are you wondering how you can make use of it when there is only one device for all of your students to share? Well, never fear, I have tons of ideas for you right here, and a “Rules for the iPad” free download, too! And for those of you that may be new to my blog, this post focuses on using the iPad in the young children’s classroom, such as Pre-K, Kindergarten, First Grade, etc. Before you get started using the iPad in any manner, make your expectations on how to use the device clear. Here are my rules for the iPad.

Turn Your House into a Smart Home with Your iPhone: SmartThings Imagine being able to control things in your house remotely, right from an app on your iPhone, such as turning on or off the lights or air conditioner. Imagine being able to be notified immediately if your pipes burst and your house is flooding, or if your dog escapes from the backyard. If this Kickstarter project gets funded (and it looks like it’s well on its way), in the future we could monitor, automate, and control a variety of different things in our house with just a couple of taps on our phone’s screen. “Your world, smarter.

SeeSpace InAiR: The World's 1st Augmented Television by Nam Do, Dale Herigstad, A-M Roussel We have now surpassed the $150K goal to add streaming to the list of features. And if we reach the $200K level, we will also add an Extra HDMI input and Preset Apps to InAiR. Thanks for the continued support for this project. InAiR brings you the world's first Augmented TV experience With InAir plugged in, your TV becomes an Augmented Television. You can turn any ordinary television into a new and wonderful medium, filled with rich and dynamic information from the Web.

Dependency Injection via Constructor in spring .java.Above Country class contains object of this class.Copy following content into Capital.java This class contains main function.Create ConstructorDIMain.java under package org.arpit.javapostsforlearning.Copy following content into ConstructorDIMain.java Here We have declared two beans with corresponding ids. 1.Class Country with id as "CountryBean" 2.Class Capital with id as "CapitalBean" constructor-arg tag is used for providing argument to bean' s constructor.type is for declaring data types and index defines position in constructor's argument. Welcome to the iPod & iPad User Group Wiki We welcome you to our wiki and blog for supporting iPod & iPad devices in education. Although our focus is K-12, many of the techniques should work for you at any level and with any number of devices. On the wiki side of this site are the deployment and management articles, and on the blog side, you will find the action research projects and classroom activities (written primarily by teachers) where iPods and iPads are supporting academic achievement for our students.

Smart Wi-Fi Router l Linksys Like many websites, Linksys uses technologies, such as cookies and web beacons, which allow us to make your visit to our website easier, more efficient and more valuable by providing you with a customized experience and recognizing you when you return. A cookie is a small data file transferred by a website to your computer’s hard drive. Linksys’s website sends cookies when you visit it, make purchases, request or personalize information, or register yourself for certain services. A cookie cannot read personal data off your hard disk or read cookie files created by other sites; indeed, the only personal information a cookie can contain is information you supply yourself. Accepting the cookies used on our website may give us access to information about your browsing behavior, which we may use to personalize your experience and track user traffic patterns.

Spring 3 Dependency Injection via Constructor and Setter In this tutorial we are going to demonstrate the Spring Framework implementation of the Inversion of Control (IoC) principle, that is also known as Dependency Injection (DI). Dependency injection (DI) is a process whereby objects define their dependencies, that is, the other objects they work with, only through constructor arguments, arguments to a factory method, or properties that are set on the object instance after it is constructed or returned from a factory method. The container then injects those dependencies when it creates the bean. DI exists in two major variants, Constructor-based dependency injection and Setter-based dependency injection. Our preferred development environment is Eclipse. We are using Eclipse Juno (4.2) version, along with Maven Integration plugin version 3.1.0.

How To Connect An iPad To A Smartboard It’s really simple–so simple that you’re going to feel silly for not having already known this–and if you tweet this out to a colleague without checking out the stunning simplicity of it all, you’re going to feel crunchy (remember that term?) later when you realize it wasn’t quite the revelation you’d thought it might be. Context Microsoft experiments with 'HomeOS' and home app store ideas It looks like the Softies may still have designs on an OS -- and an app store -- for the living room (beyond Windows Home Server). Microsoft Research is working on a project known as "HomeOS," which will provide a way to isolate non/less-technical users from the heterogeneous and often incompatible mess of devices they are attempting to network at home. (Thanks to Charon of Ma-Config.com, who sent me a pointer on September 10 to the HomeOS project.) From a description of an as-yet-unposted white paper, entitled, "The Home Needs an Operating System (and an App Store)," here is the researchers' premise: "We argue that heterogeneity is hindering technological innovation in the home---homes differ in terms their devices and how those devices are connected and used. To abstract these differences, we propose to develop a home-wide operating system.

Correlated Magnetics Research Brings MaxField Polymagnets To A Wall Near You We first told you about Correlated Magnetics Research’s programmable magnets last year. The company’s patented technology allows them to flexibly control the magnetic field shape of the magnets they create. In essence, the company can program the north/south polarity of the magnets as though they are “printing” it on them. It allows for many different configurations and has many industrial applications. But what are the consumer uses for this kind of technology?