Pusher: bringing the realtime web to your apps with HTML5 Websockets 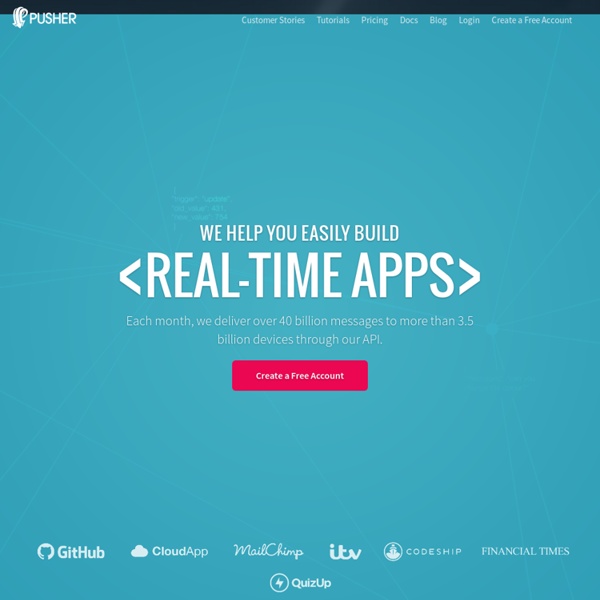 A suite of Javascript libraries and tools designed for working with HTML5 Recent Updates Follow @CreateJS November 2014 Added Unit Tests to EaselJSUpdates in preparation for new releases (coming soon). New class model, with big performance increases October 2014 CardFlight Partners With Stripe And Launches SDK To Become The ‘Stripe Of Real-World Payments’ For developers who wish to introduce payment services through their websites or mobile apps, there are any number of payment processors available. Companies like Stripe offer APIs that help developers quickly integrate payments into their applications without having to build out non-core functionality themselves. But what about developers who want to be able to take payments directly, like in real-life?

WebSocket.org The Benefits of WebSocket By Peter Lubbers & Frank Greco, Kaazing Corporation (This article has also been translated into Bulgarian.) Lately there has been a lot of buzz around HTML5 Web Sockets, which defines a full-duplex communication channel that operates through a single socket over the Web. HTML5 Web Sockets is not just another incremental enhancement to conventional HTTP communications; it represents a colossal advance, especially for real-time, event-driven web applications. HTML5 Web Sockets provides such a dramatic improvement from the old, convoluted "hacks" that are used to simulate a full-duplex connection in a browser that it prompted Google's Ian Hickson—the HTML5 specification lead—to say: "Reducing kilobytes of data to 2 bytes…and reducing latency from 150ms to 50ms is far more than marginal.

Redactor WYSIWYG editor on jQuery by James Fenimore Cooper Winding its way among countless islands, and imbedded in mountains, the "holy lake" extended a dozen leagues still further to the south. With the high plain that there interposed itself to the further passage of the water, commenced a portage of as many miles, which conducted the adventurer to the banks of the Hudson, at a point where, with the usual obstructions of the rapids, or rifts, as they were then termed in the language of the country, the river became navigable to the tide.​ "Come," he said, with a good-humored smile; "the buck that will take to the water must be headed, and not followed."

Xen VPS Hosting Whether you’re just getting started or deploying a complex system, launching a Linode cloud server has never been easier. We offer the fastest hardware and network in the industry with scalable environments. Our 24x7 customer support team is always standing by to help with any questions. Wpf Over Websockets (WoW) – How to Pump WPF windows & animations to browsers over HTML5 Websockets And Canvas Over the weekend, I just put together a hack for pumping WPF windows over Websockets and rendering it using HTML5 canvas – also with basic mouse input support. For each user connecting to the server, a new window instance is created, and screen will be pumped over web sockets to the browser as base64 encoded images. These images are painted on an HTML5 canvas. The entire source code is here at codeplex – What does this mean? Once HTML5 specification is final - it is almost certain that it’ll be the most widely adopted platform for delivering applications to end users.

markItUp! Universal Markup jQuery Editor markItUp! Releases Latest Releases Markup Sets Kinvey Launches Enterprise Back-End Service For Building Mobile Apps That Move Data From Salesforce, Oracle And Other Sources On one day, the software runs on complex hardware systems behind the firewall. The next it is software operating as a service in the cloud. And so explains Kinvey, a startup that today announced a way for enterprise customers to scrap their hand stitched, back-end systems running middleware for a service that does it for them in a cloud environment.

The WebSocket API Abstract This specification defines an API that enables Web pages to use the WebSocket protocol (defined by the IETF) for two-way communication with a remote host. Status of This document This section describes the status of this document at the time of its publication. Other documents may supersede this document. A list of current W3C publications and the most recently formally published revision of this technical report can be found in the W3C technical reports index at How Stripe, Weebly And Cue Make Programming Challenges That Are Good For Recruiting Editor’s note: Robby Walker is co-founder and CTO of Cue. His previous company, Zenter, sold to Google in 2007. Follow him on Twitter @rwalker. Startups like Stripe, Weebly, and Cue have spent weeks of valuable engineering time building programming challenges. And tens of thousands of engineers spend their valuable personal time playing them.