The Industrial Internet Of Things Is About To Become A Multi-Trillion Dollar Market - ARC - ARC. Travel App Testing Learn the unique challenges and opportunities with launching winning travel app Get The Free eBook. 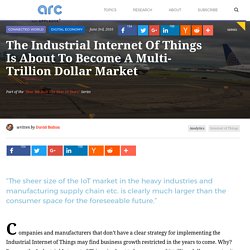 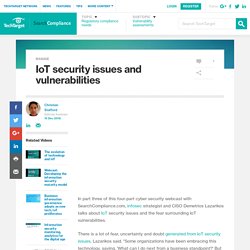 There is a lot of fear, uncertainty and doubt generated from IoT security issues, Lazarikos said. "Some organizations have been embracing this technology, saying, 'What can I do next from a business standpoint? ' But there are controls that have been either bypassed, or for whatever reasons, missed during the product release cycle. " A look at recent news stories can reveal just how far hackers are able to go if they manage to exploit IoT security issues, Lazarikos said. One IoT exploit example includes a smart refrigerator hack. Zero Day Attack Definition. DEFINITION of 'Zero Day Attack' Zero Day is an attack that exploits a potentially serious software security weakness (zero day attack or zero day exploit) that the vendor or developer may be unaware of (zero day vulnerability). 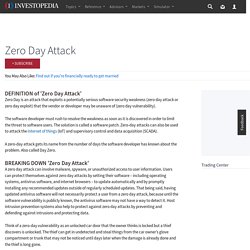 The software developer must rush to resolve the weakness as soon as it is discovered in order to limit the threat to software users. The solution is called a software patch. Zero-day attacks can also be used to attack the internet of things (IoT) and supervisory control and data acquisition (SCADA). A zero-day attack gets its name from the number of days the software developer has known about the problem. A 'common security model' against typical hazards in the IoT - IoT Now - How to run an IoT enabled business. Report: IoT security products face huge challenges - CyberScoop. Network security, device authentication and encryption are the most currently successful strategies for securing Internet of Things systems, with identity management and emerging tech — including security analytics and blockchain — likely to join them over the next one to five years, according to new research from Forrester. 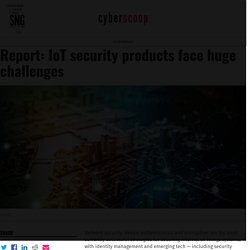 The report, “TechRadar: Internet of things security, Q1 2017,” defines “the use cases, business value, and outlook for the 13 most relevant and important technologies for delivering IoT security,” it states. Encryption “is an essential IoT security best practice,” states the report, because of the high stakes implicit in the use of IoT technologies. 10 Internet of Things companies to watch. It’s good to be an Internet of Things startup these days. 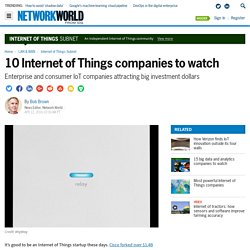 Cisco forked over $1.4B for IoT platform provider Jasper in February. Nokia Growth Partners has raised a $350 million IoT-focused investment fund. And IoT startups are pulling in tens of millions in venture funding. Verizon, in its new “State of the Market: Internet of Things 2016” report, states that its venture arm estimates that while consumer-oriented IoT firms pulled in 15% more funding than enterprise-focused ones in 2014, it is enterprise IoT startups that are now raking in the big bucks. Verizon Ventures says enterprise IoT startups attracted 75% more funding than consumer IoT upstarts last year and that enterprise IoT startups are expected to grab 2 to 3 times as much funding as their consumer counterparts this year. (For more from Verizon Ventures’ Ruth, check out my interview with him here.) 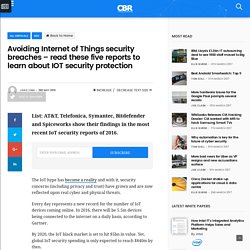 The IoT hype has become a reality and with it, security concerns (including privacy and trust) have grown and are now reflected upon real cyber and physical threats. Every day represents a new record for the number of IoT devices coming online. In 2016, there will be 5.5m devices being connected to the internet on a daily basis, according to Gartner. By 2020, the IoT black market is set to hit $5bn in value. CBR collects five major IoT security reports that every C-exec, IT manager and anyone in IT and OT must read. The CEO’s Guide to Securing the Internet of Things. IoT security issues and vulnerabilities. Internet Of Things (IoT) Predictions From Forrester, Machina Research, WEF, Gartner, IDC. 2017 Comparisons on Network, Wireless Comms, Security, Industrial. 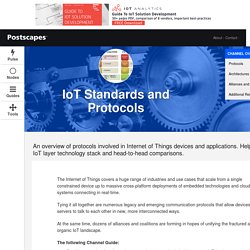 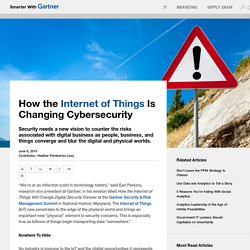 The Internet of Things (IoT) now penetrates to the edge of the physical world and brings an important new “physical” element to security concerns. This is especially true as billions of things begin transporting data “somewhere.” Nowhere To Hide. Peerlyst. IEEE SA - P2413 - Standard for an Architectural Framework for the Internet of Things (IoT) OWASP Internet of Things Project. I Am The Cavalry A global grassroots organization that is focused on issues where computer security intersects public safety and human life. 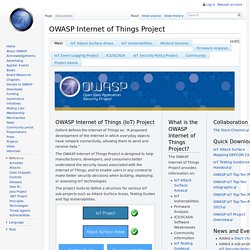 Addressing the mounting concerns, in January 2015 the Online Trust Alliance, established the IoT Trustworthy Working Group (ITWG), a multi-stakeholder initiative. Talks Podcasts. IoT Security Standards – Paving the Way For Customer Confidence. With the opening of the Consumer Electronics Show in Las Vegas, the IoT has moved beyond the initial hype phase and even past the phase of early deployments into what I call the “parental awareness phase”. 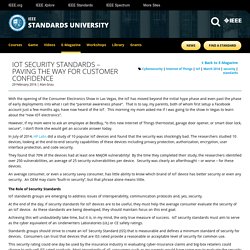 That is to say, my parents, both of whom first setup a Facebook account just a few months ago, have now heard of the IoT. This morning my mom asked me if I was going to the show in Vegas to learn about the “new IOT electronics”. GSMA IoT Security Guidelines - complete document set. February 9, 2016 Technical Document The set of guideline documents promotes a methodology for developing secure IoT services to ensure security best practices are implemented throughout the life cycle of the service. The documents provide recommendations on how to mitigate common security threats and weaknesses within IoT services.

The scope the document set is limited to recommendations pertaining to the design and implementation of IoT services and network elements. IoT Security - A Safer Internet of Things. Page Content ​​​​Protecting IoT data at rest and in motion​ The Internet of Things (IoT) will impact on how we interact with the world around us. Billions of "things"​ talking to each other – from TVs, fridges and cars to smart meters, health monitors and wearables. IoT promises unsurpassed convenience. But gaining and retaining consumer trust on privacy and security is essential if the IoT is to reach its potential.