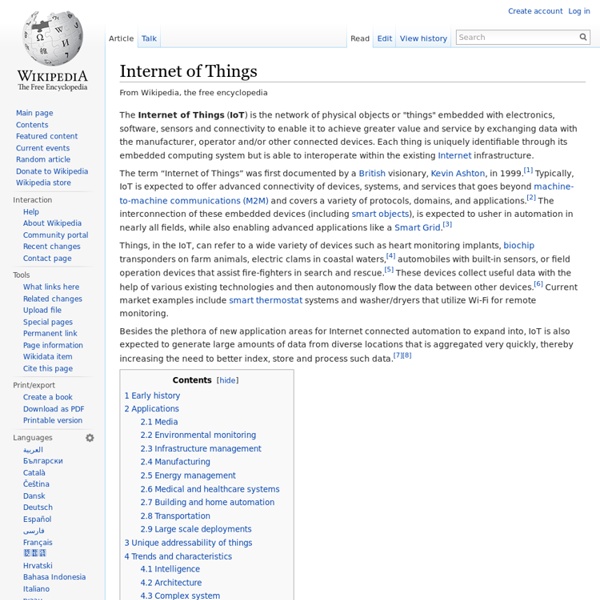 The Internet of Things (IoT) is the network of physical objects or "things" embedded with electronics, software, sensors and connectivity to enable it to achieve greater value and service by exchanging data with the manufacturer, operator and/or other connected devices. Each thing is uniquely identifiable through its embedded computing system but is able to interoperate within the existing Internet infrastructure. The term “Internet of Things” was first documented by a British visionary, Kevin Ashton, in 1999.[1] Typically, IoT is expected to offer advanced connectivity of devices, systems, and services that goes beyond machine-to-machine communications (M2M) and covers a variety of protocols, domains, and applications.[2] The interconnection of these embedded devices (including smart objects), is expected to usher in automation in nearly all fields, while also enabling advanced applications like a Smart Grid.[3] Early history[edit] In its original interpretation,[when?] Media[edit]

International Workshop on the Web of Things (WoT) The Internet of Things has become a well-known brand for a set of research issues in the pervasive and ubiquitous computing communities. The WoT workshop series is the prime location for researchers and practitioners to share their results and projects with the Web of Things community. Can’t make it to the workshop?

In the Modern World of IT, All Things Are Connected Richard Gordon Research VP 14 years at Gartner 23 years IT industry Richard Gordon is a research vice president in Gartner Research. He has worldwide responsibility for Gartner's Global IT Market Forecasting. Read Full Bio Web of Things The Web of Things (or WoT) is a concept and a set of blueprints to make every-day physical objects first class citizens of the World Wide Web by giving them an API, thus greatly facilitating the creation of their virtual profiles as well as their integration and reuse in all kinds of applications. The Web of Things is primarily an evolution of the Internet of Things where the primary concern has been how to connect objects together at the network layer: simiarly to the way the Internet addressed the lower-level connectivity of computers (layers 3-4 of the OSI model), the Internet of Things is primarily focusing on using various technologies such as RFID, Zigbee, Bluetooth or 6LoWPAN. On the other hand, just like what the Web is to the Internet, the Web of Things regroups research and industrial initiatives looking into building an application layer for physical objects to foster their reusability and integration into innovative 3rd party applications. Technical characteristics[edit]

How Smart, Connected Products Are Transforming Competition Information technology is revolutionizing products. Once composed solely of mechanical and electrical parts, products have become complex systems that combine hardware, sensors, data storage, microprocessors, software, and connectivity in myriad ways. These “smart, connected products”—made possible by vast improvements in processing power and device miniaturization and by the network benefits of ubiquitous wireless connectivity—have unleashed a new era of competition. This Android Wear App Lets You Control Your PC With Your Watch If you’ve ever felt too lazy to reach for the mouse and keyboard, you can now use an Android Wear smartwatch to control your PC instead. The latest version of Unified Remote includes Android Wear support, letting you manipulate your PC’s cursor from your wrist and use voice commands to control specific programs and websites. The Android Wear features require the full version of Unified Remote, which is a $4 upgrade from the basic free version. But as futuristic as wrist-worn PC controls seem, keep in mind that the software still needs some serious polish. Why this matters: Jokes about laziness aside, controlling a computer by smartwatch could be make a lot of sense for home theater PC setups, where touch-based smartphone controls are already quite useful.

The hidden environmental cost of the Internet of Things Analyst firm Gartner is forecasting that the IoT will encompass some 30 billion connected devices by 2020. And while networking vendor Cisco has pegged the IoT's value at $14.4 trillion between 2013 and 2022, questions are being asked over its potential environment cost. What becomes of these thousands of sensors and smart devices once they reach EOL? Bettina Tratz-Ryan, research VP and green IT specialist with Gartner, says that this is one of her biggest concerns around the growth of the IoT. “Gartner has forecast that by 2020 we will have 26 billion items deployed in the world; what happens to these sensors, once they go into the waste bin?" Intel's IoT vision sees far more than chips Intel is bringing all its assets to bear on the Internet of Things, a hot topic for nearly all IT vendors but one that's especially critical to big chip makers. While Intel would like to see its low-power chips used in sensors, wearables and other hardware that will ship in huge numbers if the industry's IoT dreams come true, it also has software, security and infrastructure to add to the mix. In the short run, those may matter more than the silicon itself.

How the internet of things could make media physical again Not so long ago, every act of consumption began with a ritual. We pulled records from sleeves and perched them on turntables, slid books from shelves, watched as VHS tapes were ingested with a soft ca-chunk. Qleek, from Paris-based startup Ozenge, aims to return our digital media to a state in which they can be collected, stored, handled, played and shared in the same way that physical media were, once. The makers of Qleek want you to pick up a wooden hexagon printed with, for example, the artwork for an album or mix, place it on a reader, and hear the corresponding tracks play on your device of choice. At first, Qleek sounds as if it will only interest the kind of nostalgics who want their houseguests to see how refined is their taste. But it’s an example of a larger phenomenon with the potential to redefine the nature of human-computer interfaces.

Why bendable electronics could be the future of the internet of things When the first Harry Potter movie came out in 2001 the idea of the Daily Prophet, a newspaper that contains moving pictures, qualified as magic. A Kickstarter campaign by Ynvisible, a Lisbon-based technology firm, is bringing that magic to life with its displays, held together with paper-thin circuitry. Ynvisible’s offering, called Printoo, is a bunch of paper-thin circuit boards. Imagine the Arduino board, perhaps the most popular do-it-yourself micro-controller used by tinkerers, but thinner and lighter. The Printoo modules are flexible, meaning they can be bent, folded and attached to any object—cans, clothes, toys—and come with both LEDs as well as flat, flexible “electrochromatic” displays for output. The idea obviously caught the imagination of the DIY community.

The internet of things is going to have to do better than this ridiculous “smart cup” The Vessyl is a $100 glass cup with companion smartphone app that can supposedly detect what liquid you’ve poured into it, describe it, and identify nutritional information such as calories, sugar, and caffeine. Designed by Yves Behar’s Fuseproject, it is the sort of gadget that might briefly appeal to the quantified self/fitness tracking/early adopter crowd. Or, at least those willing to use only one cup, which must be charged every five to seven days and washed by hand. It’s a fine-looking cup, and with enough publicity muscle, it may find its way into several year-end gadget gift guides.

The “internet of things” may not always need an internet connection The “internet of things” is one of those odd phrases that can mean many things and nothing at the same time. On one hand, it describes a future that is rapidly becoming the present, with all sorts of objects—from televisions and watches to cups and streetlights—able to connect to the internet. On the other hand, it is used a marketing tactic by chip-makers and networking companies eager to sell their wares. Between 26 and 50 million “things” will be connected to the internet by 2020, according to various forecasts. But not all of those things need an internet connection, points out Davor Sutija, who runs Thinfilm, a Norwegian company working in the field of printable electronics.

The Internet of Things Explained: Making sense of the next mega-trend The Internet of Things, or IoT, is emerging as the next technology mega-trend, with repercussions across the business spectrum. By connecting to the Internet billions of everyday devices–ranging from fitness bracelets to industrial equipment–the IoT merges the physical and online worlds, opening up a host of new opportunities and challenges for companies, governments, and consumers. In research cutting across sectors and regions, the Global Investment Research (GIR) Division at Goldman Sachs examines the drivers that are bringing the Internet of Things to reality now and assesses the implications for the first industries being impacted. The IoT as the Third Wave of the Internet In the video below, Simona Jankowski, senior equity research analyst at Goldman Sachs discusses GIR’s new report The Internet of Things: Making Sense of the Next Mega-Trend.

INTERNET OF CARING THINGS The INTERNET OF CARING THINGS means connected objects that serve consumers' most important needs: physical and mental wellbeing, safety, security, oversight of loved ones, and more. You're probably already familiar with the innovations that have blazed an early CARING trail. The Nest smart thermostat*, NIKE fuelband and Fitbit, for example.