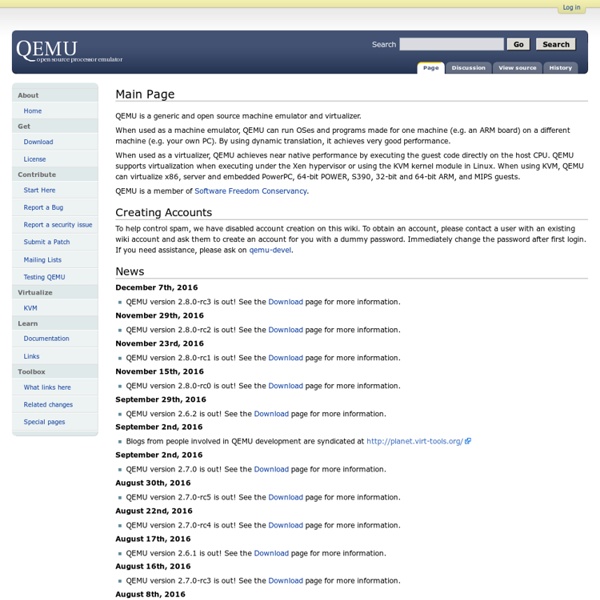 cef HOWTO: Virtual Raspbian on Qemu in Ubuntu Linux 12.10 How to chroot RPI envoronment. Keep in mind this took me so many hours to figure out it's not even funny. I'm not exactly a nix guru by any means of the word. The 1st part sucks as it is how you get the img ready. There are two ways to do it but I found it easier just to do it this way. The hard way is to use gemu to expand the img file and then some fancy fdisk stuff in the image to expand. My Way: I do this part all in windows so if you're a linux user you will need to know how to do dd and other linuxy things. Download the latest Raspbian 2013-02-09-wheezy-raspbian.img from unzip it. Write to your SD Card [8 gig is plenty ] I use win32diskimager Once completed insert SD into your RPI and boot it. Run through initial setup screen paying attention to the "expand rootfs" as this one is really the only one of two parts that matter. Exit and reboot log in !!

QNX digital instrument cluster -- sneak preview - YouTube GUSS Table of contents Introduction GUSS the Universal System Simulator simulates hardware to test, debug and profile software on. This project has regretfully been decommissioned; contact maintainers at gnu.org if you are interested in resurrecting it. GUSS has several objectives: Be fast. News Mon Sep 15 2003 - Performance is everything. I (Johan Rydberg) have spent the last couple of months rewriting the simulator engine of GUSS. Status GUSS is currently in a very ealy alpha state. GUSS currently only has one (partial) functional target: i386. Work has begun on some other targets, or there are plans for: IA-64 (work has begun) MIPS32 (planned -- back-ported from old GUSS) PowerPC (work has begun) ARM (planned) Motorola 68K (planned) Download Everything old is out. cvs -d:pserver:anoncvs@subversions.gnu.org:/cvsroot/guss login {just hit enter when prompted for password} cvs -z3 -d:pserver:anoncvs@subversions.gnu.org:/cvsroot/guss co guss You can also browse the sources via viewcvs. Documentation Links

Oracle VM VirtualBox Wind River Home Model-driven engineering Overview[edit] The MDE approach is meant to increase productivity by maximizing compatibility between systems (via reuse of standardized models), simplifying the process of design (via models of recurring design patterns in the application domain), and promoting communication between individuals and teams working on the system (via a standardization of the terminology and the best practices used in the application domain). A modeling paradigm for MDE is considered effective if its models make sense from the point of view of a user that is familiar with the domain, and if they can serve as a basis for implementing systems. The models are developed through extensive communication among product managers, designers, developers and users of the application domain. As the models approach completion, they enable the development of software and systems. Some of the better known MDE initiatives are: History[edit] According to Douglas C. Tools[edit] See also[edit] References[edit] Further reading[edit]