Future - If we made contact with aliens, how would religions react? In 2014, Nasa awarded $1.1M to the Center for Theological Inquiry, an ecumenical research institute in New Jersey, to study “the societal implications of astrobiology”. 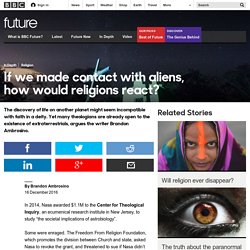 Some were enraged. The Freedom From Religion Foundation, which promotes the division between Church and state, asked Nasa to revoke the grant, and threatened to sue if Nasa didn’t comply. NASA Admits: Someone Took Control Over Space Probe Voyager 2 And Sent Data In An Unknown Language. In 2010, Voyager 2 became the first spacecraft powered by human beings to leave the known solar system. 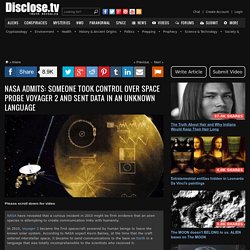 According to NASA expert Kevin Baines, at the time that the craft entered interstellar space, it became to send communications to the base on Earth in a language that was totally incomprehensible to the scientists who received it. 5 'Alien' skulls that science cannot explain. Nearly in every corner of the globe, someone has managed to find or excavate mysteries skulls that defy explanation. 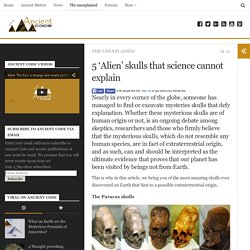 Whether these mysterious skulls are of human origin or not, is an ongoing debate among skeptics, researchers and those who firmly believe that the mysterious skulls, which do not resemble any human species, are in fact of extraterrestrial origin, and as such, can and should be interpreted as the ultimate evidence that proves that our planet has been visited by beings not from Earth. Apollo Astronaut Edgar Mitchell Says Aliens Prevented Nuclear War On Earth To Ensure Our Survival. Edgar Mitchell, the sixth man to ever step foot on the moon, has recently disclosed information that some may find unbelievable or rather improbable. 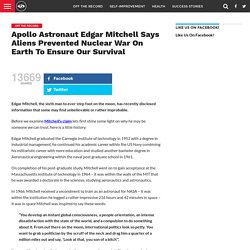 Before we examine Mitchell’s claim lets first shine some light on why he may be someone we can trust, here is a little history: Edgar Mitchell graduated the Carnegie institute of technology in 1952 with a degree in industrial management, he continued his academic career within the US Navy combining his militaristic career with more education and studied another bachelor degree in Aeronautical engineering within the naval post graduate school in 1961. 'If You Knew What We Do, You Will Never Sleep Again' - Nasa Director.

EWAO 22 Years Later, Zimbabwe UFO Witness Reveals Alien Message. The Explorer After my first UFO encounter I turned from a lifelong skeptic into a believer. 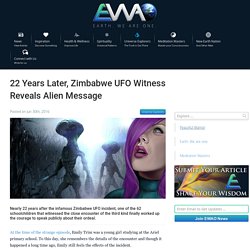 After I had my second UFO experience I became a true believer. Mother Finds Alien-Like Entities Communicating With Her Daughter [Video] - UFOholic.com. A bizarre apparition perturbed the careless sleep of an infant girl from Australia. 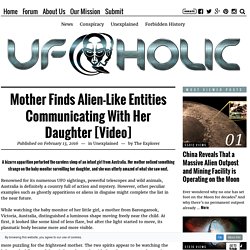 Her mother noticed something strange on the baby monitor surveilling her daughter, and she was utterly amazed of what she saw next. Renowned for its numerous UFO sightings, powerful telescopes and wild animals, Australia is definitely a country full of action and mystery. NASA admits: Someone took control of our aircraft, we received messages from an unknown language.

Space probe “Voyager 2” during its path through space sent a message to the base of the Earth in a quite unintelligible language. 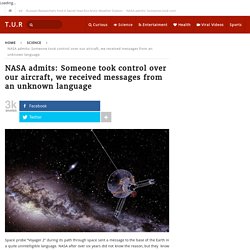 NASA after over six years did not know the reason, but they know that it can not be accidental. “Voyager 2” is the first spacecraft to leave the solar system in 2010 and it was in the moments when the spacecraft could enter into interstellar space that a strange thing happened, that NASA would consider “someone or something” had assumed control over it. “At a distance of about 15 billion kilometers from Earth, the probe suddenly started sending data in a language which they could never understand,” said NASA expert Kevin Baines, reports Physics Astronomy.

Untitled. BBC iWonder - Were we contacted by aliens in 1977?

This Is How Humans Are Energy Conductors For The Anunnaki – FerocesMente. In the recent Global Energy Breakthrough Conference in Boulder, Colorado, Michael Tellinger shared his theory that sound is one of the most abundant forms of free energy on the planet. 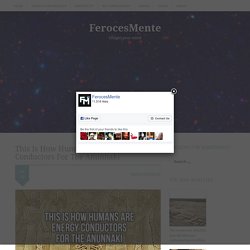 There were really an alien? Evidence is to be found in ancient coins. Video. Fermi paradox. NASA announced that it communicates with four races of aliens. NASA’s spokesman Trish Chamberson openly admitted the existence of extraterrestrial civilizations and, moreover, noted that the National Agency is currently in contact with the four races of aliens. 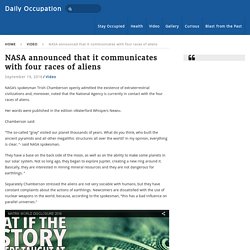 Her words were published in the edition «Waterford Whispers News». The Atacama Mystery. Did we just discover aliens? Stocksy It centers on a star known as KIC 8462852, tucked in the constellation Cygnus, more than 1,500 light years away from Earth. 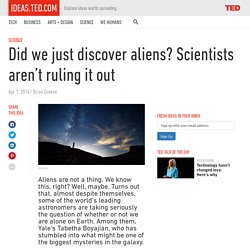 In 2015, using data from NASA’s Kepler space observatory, citizen scientists from Planet Hunters noticed something weird: something roughly 1,000 times the area of Earth was blocking the light from the star. 'If You Knew What We Do, You Will Never Sleep Again' - NASA Director (Video) Why Musical Aliens Probably Use the Same Scale We Do. Reliance on universal mathematical principles may mean alien music is similar to our own. by Brian Dunning Filed under Aliens & UFOs, General Science Skeptoid Podcast #513 April 5, 2016 Podcast transcript | Download | Subscribe Listen: Buzz Aldrin: On the Moon we were ordered by aliens to move away.

Here are the statements by the former astronauts: Professor: What really happened out of Apollo 11? Buzz Aldrin: An amazing thing, even though we have always known of this possibility. The fact is that they (aliens) have ordered us to turn away! . Professor: What do you mean “warned to move away”? The Fermi Paradox: Research Suggests Aliens Haven't Contacted Us Because They're Dead.

The universe we live in is incredibly vast. As human technology and knowledge expand over the years, our search for other living species outside our own planet has increased and intensified. EWAO New Study suggests Alien Civilizations may number in TRILLIONS. More Than 60 School Children Witness Non-Human Beings & A Large Craft Landing – Cosmic Scientist.

Venezuelan Asylum Achieved, Snowden reveals UFO Documents. By Kilgoar, on July 5th, 2013 According to bombshell documents leaked by Snowden, the government has long known UFOs to be a species more advanced than mankind. CARACAS — Edward Snowden, the leaker of NSA surveillance documents, was granted asylum in Venezuela on Friday. With safe harbors in sight, Snowden was willing to share shocking and world-shattering exclusive secret government documents with the Internet Chronicle. Snowden’s testimony was as follows: Documents Leaked By Edward Snowden Reveal An Incredible Secret Buried Below Our Feet. For those who don’t know who Edward Snowden is, it’s crucial we get you caught up to understand the gravity of what has unfolded. Snowden is a former employee of the CIA, computer professional, and former contractor for the US Government.

In 2013, Snowden copied a number of classified documents from the US National Security Information. The information contained multiple global surveillance programs. These programs are the result of the combined efforts of the NSA and Five Eyes with cooperation of telecommunication companies and European governments. ALIENS AREN’T COMING – THEY’RE ALREADY HERE [DOCUMENTARY] – Science Mastermind.