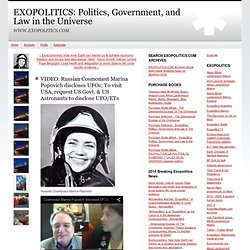 & US Astronauts to disclose UFO/ETs MOSCOW, RUSSIAN FEDERATION – Cosmonaut Marina Popovich, who is a Hero of the Soviet Union, holds 102 world records, is in the Guinness Book of World Records, disclosed her personal experiences with UFOs and her knowledge of the extraterrestrial presence in an exclusive May 23, 2014 ExopoliticsTV interview with Alfred Lambremont Webre. Cosmonaut Marina Popovich, who maintained she was not punished nor censored by the Russian military or authorities when she reported these UFO experiences to them and then went public, stated she intends to visit the United States and help convince the US government and Congress along with her fellow U.S. astronauts. U.S. astronauts, the U.S. government, and the U.S. Congress have maintained a 60+ year official embargo on UFOs and extraterrestrials. ET.Updates - The Truth Is Written In Our Genes.

Higher Perspective: Ancient UFOs. This painting is called “The Madonna with Saint Giovannino”. 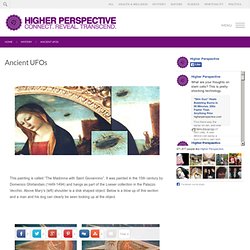 It was painted in the 15th century by Domenico Ghirlandaio (1449-1494) and hangs as part of the Loeser collection in the Palazzo Vecchio. Above Mary’s (left) shoulder is a disk shaped object. Below is a blow up of this section and a man and his dog can clearly be seen looking up at the object. These two objects (play video) are from part of a fresco entitled “The Crucifixion” and was painted in 1350. They are located above the altar at the Visoki Decani Monestary in Kosovo, Yugoslavia. These two tapestries were created in the 14th century. The above picture depicts Jesus and Mary on what appear to be lenticular clouds. The above painting is by Paolo Uccello (1396-1475) and is entitled “La Tebaide” (painted c.1460-1465). The above painting is by Carlo Crivelli (1430-1495) and is called “The Annunciation with Saint Emidius” (1486) and hangs in the National Gallery, London. More wheels ! 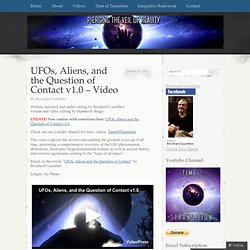